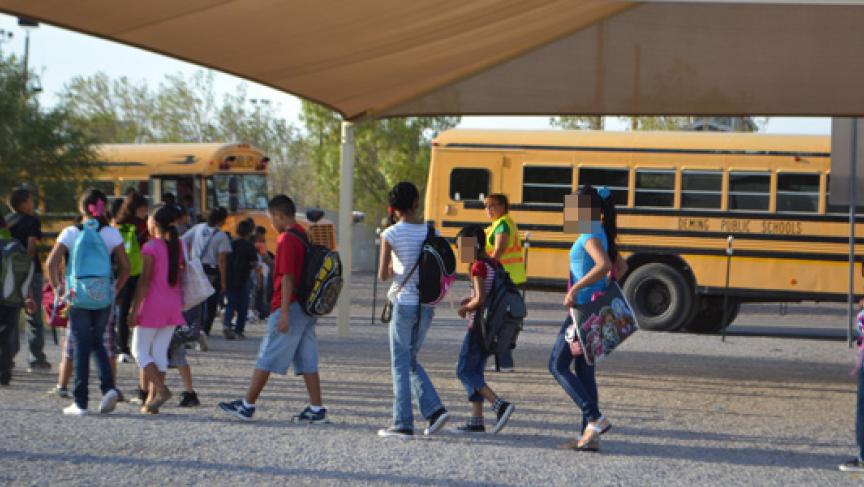 About 400 students in the Deming, N.M., school district cross the border from Mexico every day. (Photo by Teri Schultz.)

Many U.S. school districts take pains to ensure that they’re only educating kids who can prove local residency.

But some communities in New Mexico have more of an open-door policy. In fact, some of them have been taking in students not just from out of the district, but from out of the country. These students cross the border from Mexico every day to go to American schools.

Lola Campos’s daughter is one of them. She says it hurts to see her 7-year-old tear up every morning as she walks across the border, leaving her mom behind in Palomas, but Campos is grateful her daughter gets the opportunity.

“She cries,” Campos said, “but I’m glad she gets to go to school on the other side.”

Her daughter is one of about 400 kids in Palomas who can go to American schools because they were born in the U.S. Campos delivered her baby in New Mexico to give her a passport to a better life, including the right to an American education.

The courts have generally upheld that right. What’s unusual at the Palomas-Columbus crossing, though, is the welcome mat put out for these children. It’s illustrated by the trail of yellow school buses, taking them from the border to nearby Columbus elementary school — or 30 miles away to junior and senior high in Deming.

Harvielee Moore, the superintendent of Deming public schools, says the tradition of educating the children of Palomas started in the 1950s. Back then, they didn’t have to be American citizens.

“In the early days, it was, if there was room. That was a philosophy that caught on," she said.

Moore says in the ’70s, Luna County decided that every enrolled student must prove U.S. citizenship. She says the schools require documents, but they don’t police the student body.

“New Mexico asks its schools to educate and that is what we do. We would not be doing our job if we turned any child away who is qualified by state regulation and federal to come to school. Who are we to say no,” he asked.

There are those in the area who’d like to say ‘no,’ — among them Gordon Mast, head of the Luna County's Tea Party group.

He wants the school board to require students’ families to live in Luna County and pay taxes to support the schools. He accuses the school district of inflating its numbers with the kids from Palomas to get more government funding, which has led to overcrowding.

But Mast’s arguments go beyond the financial. The Mexican drug war spread to Palomas in force a few years ago, and dealers saw great potential in the hundreds of students who cross the border every day and undergo only irregular backpack checks.

Mast says he doesn’t blame the kids, but still has a problem.

“We’re paying way too much to educate students who are just drug mules. It’s got to be stopped," he said.

According to statistics from U.S. Customs and Border Protection, from January through April of this year, 40 percent of marijuana seizures at the Columbus port of entry, where the students cross, were from people aged 17 or younger. Most of them were from Palomas.

That’s why it would be better for everyone if the students were forced to stay on the Palomas side, Mast says — no incentive for drug dealers, fewer students in Luna County classrooms.

But school superintendent Moore says those who oppose educating Palomas students are being short-sighted.

“If they are educated, they have the opportunity to give back to society, they can become hardworking taxpayers, they will be creating the jobs of the future,” she said.

Moore says until the school board tells her otherwise, the job of Luna County public educators is to ask students what they plan to learn, not where they live.