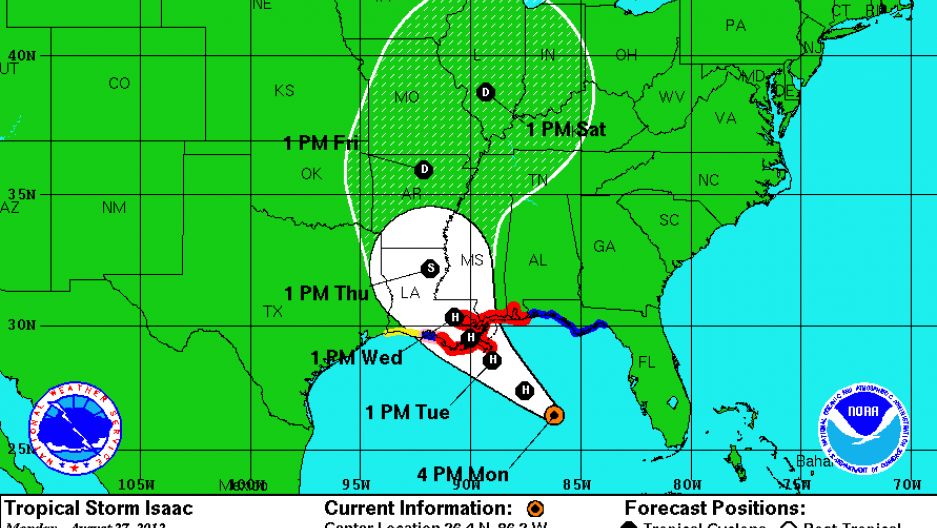 This graphic from the National Hurricane Center shows the expected landfall for Tropical Storm Isaac, which will be the first test of the newly rebuilt New Orleans levee system.

Tropical Storm Isaac, which lashed the Florida Keys and South Florida over the weekend, is moving over the warm waters of the Gulf of Mexico, tracking toward New Orleans.

If all goes as expected, the storm should come ashore in the New Orleans area almost seven years to the day after the highly deadly Hurricane Katrina struck the same general area. While Isaac isn't expected to pack the same punch as Katrine, which was a strong Category 3 storm, Isaac is still expected to produce winds of up to 100 mph when it comes ashore between Tuesday afternoon and Wednesday afternoon.

Such winds would be strong enough to make Isaac a Category 2 storm.

According to information from the National Hurricane Center, Isaac may dump as much as 16 inches of rain on the immediate vicinity of New Orleans. That rain, and the hurricane's storm surge, will provide the first test of the rebuilt levee system in New Orleans. Already, Louisiana officials are calling for voluntary evacuations — in hopes of being prepared, just in case.

Isaac currently has sustained winds of 70 mph, just short of hurricane status. A hurricane warn is in effect from Morgan City, La., east along all of Mississippi and Alabama's Gulf coastline. Tropical storm warnings extend east and west from there.

According to the Associated Press, the Gulf Coast is one part of the country that's not been suffering through drought. In fact, officials worry the rain that Isaac is expected to bring, coupled with a rainy summer, could lead to toppled power lines and trees.

"A large, slow-moving system is going to pose a lot of problems - winds, flooding, storm surge and even potentially down the road river flooding," Richard Knabb, director of the National Hurricane Center in Miami said to the AP. "That could happen for days after the event."

President Barack Obama preemptively declared a state of emergency in Louisiana as that state prepares for the storm. Federal Emergency Management Agency officials say that the nearly $14.5 billion its invested in the New Orleans area since Katrina built a system that's designed to stand up to storms stronger than Isaac.