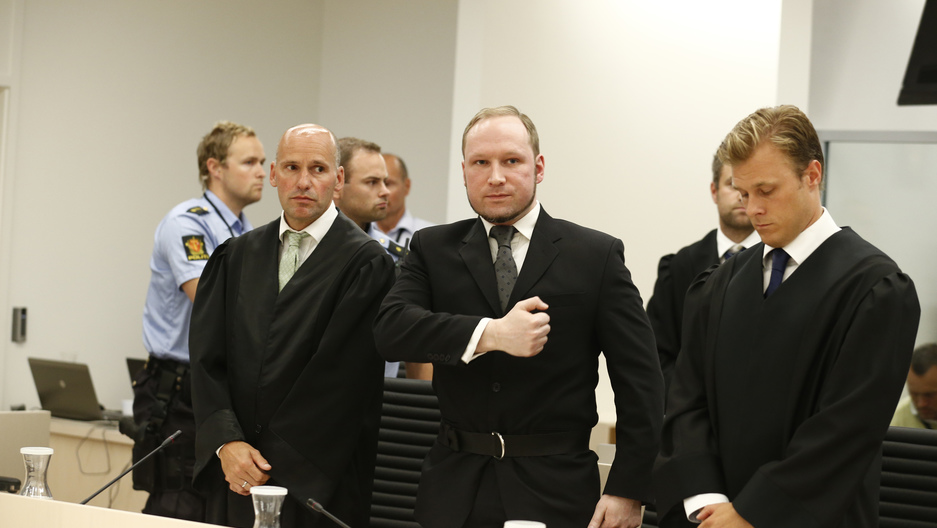 Norwegian mass killer Anders Behring Breivik gestures as he leaves the courtroom after the Oslo Court delivered the verdict of his trial August 24, 2012. Breivik delivered a smirk of triumph after the verdict. (Photo by Heiko Junge/NTB Scanpix via Reuters

Norwegian judges Friday sentenced Anders Breivik to 10 to 21 years in prison for his bomb and shooting rampage that killed 77 people last year.

Brevik also wounded hundreds when he bombed buildings in Norway's capital, Oslo, and then fired on a summer youth camp on Utoya island.

Because of the structure of the Norwegian criminal justice system, 21 years is the maximum penalty any criminal can receive, but the sentence can be extended indefinitely so long as the individual is deemed to still be a threat to society.

"He has killed 77 people, most of them youth, who were shot without mercy, face to face. The cruelty is unparalleled in Norwegian history," Judge Arne Lyng said at the trial. "This means that the defendant even after serving 21 years in prison would be a very dangerous man."

Breivik was defiant to the end, offering an apology that was anything but.

"I wish to apologize to all militant nationalists that I wasn’t able to execute more," Breivik said.

Norway has a different judicial concept than the United States, The Atlantic pointed out. Whereas the American justice system is based mostly on retribution, the Norwegian justice system focuses on restoration.

"Restorative justice thus begins with a concern for victims and how to meet their needs, for repairing the harm as much as possible, both concretely and symbolically," explains a 1997 academic article, by a scholar of restorative justice named Howard Zehr, extolling the systems' virtues. In the Breivik trial, this meant giving every victim (survivors as well as the families of those killed) a direct voice. Victims were individually represented by 174 court-appointed lawyers. The court heard 77 autopsy reports, 77 descriptions of how Breivik had killed them, and 77 minute-long biographies "voicing his or her unfulfilled ambitions and dreams."

So while Brevik will be locked away, and likely for the rest of his life, he'll still have access to the same "restorative" services that other, more common criminals do.

For example, his cell has been described as a three-room space with "Ikea-like furniture."