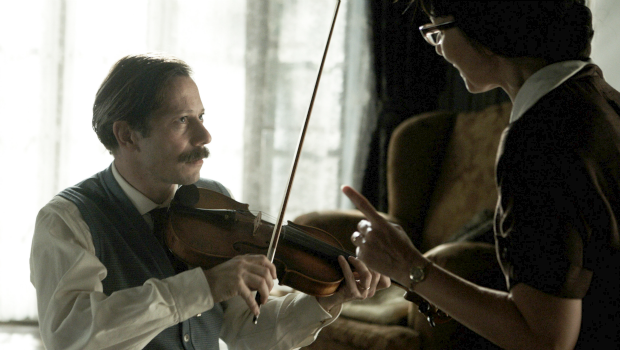 In Chicken With Plums, Mathieu Amalric plays Nasser Ali, a talented but miserable violinist who loses his will to live after his prized violin is broken. (Photo by Patricia Khan/Sony Pictures.)

Chicken with Plums, which opened this past weekend, is another comic boook movie.

But it's also very different.

Originally a graphic novel, it tells the story of Nasser Ali, a virtuoso violinist living in Tehran in the 1950s. He loathes his wife, has no patience for his children, and he loses his will to live. It's a strange and dreamy mélange of memories and secrets.

But it all comes together to tell a universal story about creative passions, family obligations and heartbreak.

The film was adapted for the screen and directed by its creator, Marjane Satrapi, an Iranian exile whose 2007 Oscar-nominated film, Persepolis, is a black-and-white animated feature about coming of age during the Iranian revolution. Satrapi combined live action, animation, and even puppets to construct a magic-realist 1950s Iran reminiscent of Douglas Sirk-style melodrama.

The movie is visually stunning, with its intricately detailed set and costume design — and absolutely no CGI.

"I come from illustration and I love to do things with the hand," Satrapi said. “When I make a movie, every detail, from the color of the brick to the skirt of a woman, the laces of the shoes, everything is of a major importance to me.”

Everything was built on a sound stage, including Nasser Ali's courtyard garden where much of the action takes place.

"But it looked so real," Satrapi said, "that after two days we had a colony of ants living between all these plastic things. So even animals believed it actually existed."

But Chicken with Plums probably won’t be showing on movie screens in Iran: its scenes of kissing and brief nudity will make it a hard sell with government censors. Satrapi, though, has faith in the black market.

"Iranians see all sorts of film," she said. "It comes out in America, two days after it's in Iran. So they will watch it of course."