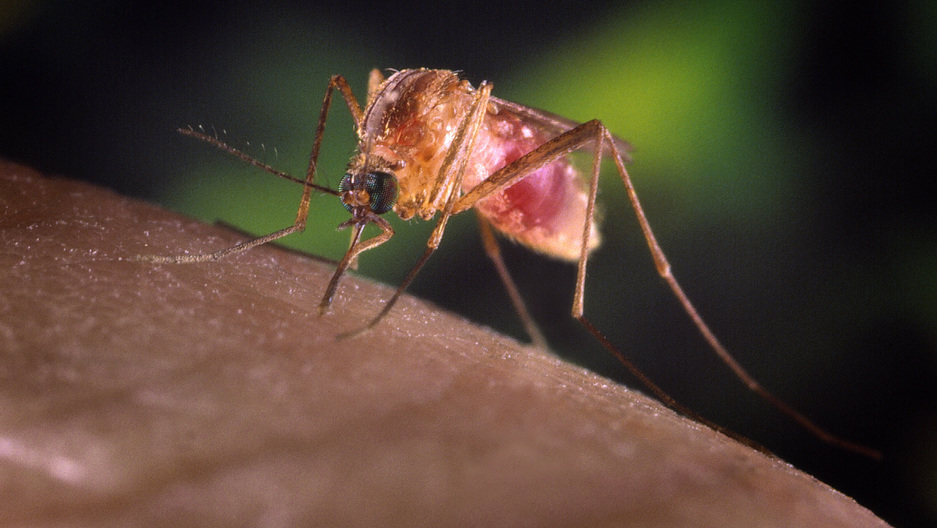 A Culex quinquefasciatus mosquito is shown on a human finger. This type of mosquito has been proven to be a vector associated with transmission of the West Nile virus, according to the CDC. (Photo courtesy of the Center For Disease Control.)

The state of Texas Thursday night began aerial spraying of the entire city of Dallas, the nation’s hotspot for the mosquito-borne West Nile, in an effort to stem the virus' spread.

So far, nearly 200 people have been infected and 10 people have died in Dallas County. The mayor of Dallas declared a state of emergency. The majority of the nation's West Nile cases have been reported across the hot and humid south central United States. According to the CDC, Texas has had 336 cases, Mississippi 59, Louisiana 52 and Oklahoma 49.

Louisiana has had six deaths, the only other state which has seen more than one death, besides Texas' 14.

Human infections are at their highest since 1999 when the virus was first found in the United States, in New York. At least 26 people have died so far this year from West Nile virus.

The disease travels when infected birds come into contact with mosquitoes, which then bite humans.

Dr. William Schaffner, an infectious disease expert at Vanderbilt University in Nashville, said the drought this year has actually dramatically worsened the spread of the disease — something of a surprise, because mosquitoes need wet environments to breed.

"As it happens, drought leaves small amounts of water that then get very brackish," he said. "That's an ideal place for mosquitoes to breed. And those small bits of water also attract the birds. Now, we have a lot of closeness between mosquitoes and birds, so you get more transmission."

There's no vaccine to prevent West Nile, and the disease itself can't be treated once its contracted. The focus, for public health experts, is to treat the symptoms in people and prevent the spread of the disease to humans by killing the mosquitoes.

In Dallas, where the disease is so prevalent, that means coordinated aerial spraying over the entire city — something the city hasn't done in more than 40 years. Schaffner says the pesticide they're using is actually a natural product, derived from the chrysanthemum plant.

"This has been used very, very carefully in many parts of the country," he said. "It is sprayed in minute quantities. Kitties, babies, grown-ups, old folks, vegetables, cats and dogs — we're all safe."

Schaffner said the best thing people can do themselves is try their best not to get bit by mosquitoes. He suggests checking for standing water around your home, using insect repellant, particularly if you're going out to exercise early in the morning or later in the evening, and wear long-sleeve shirts and pants.