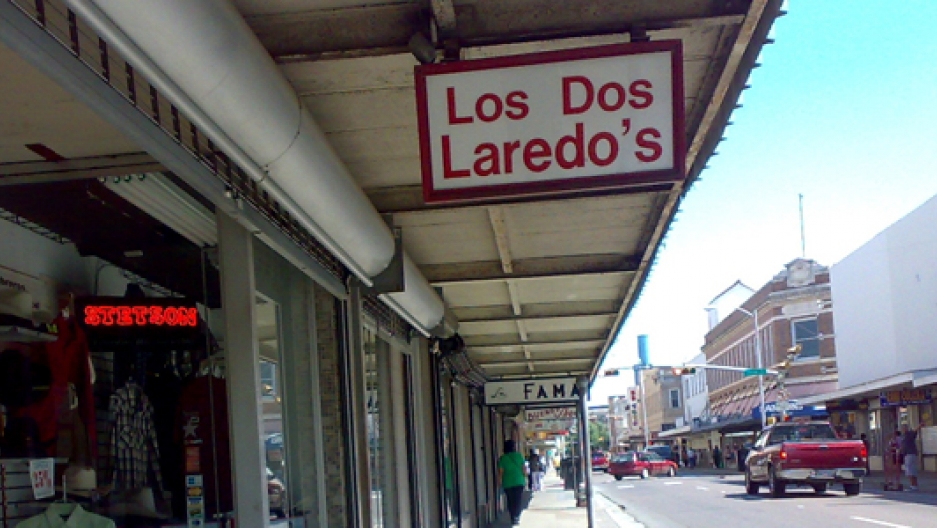 A view of the shops on Convent Street in Laredo's historic district. (Photo: Shannon Young)

Share
Laredo, Texas, and Nuevo Laredo, south of the border are often referred to as "Los Dos Laredos" — or the two Laredos. The main street of the historic Texan town runs right across International Bridge number 1, over the Rio Grande to become the central corridor of Nuevo Laredo's once buzzing commercial and night life district. Now, business on both sides of the river is bleak. Around half of the small businesses in downtown Nuevo Laredo are closed. Frequent shootouts, occasional grenade attacks and even car bombs, have turned the Mexican border city into an urban war zone and left its economy in shambles. While the violence itself hasn't crossed the river into Laredo, Texas — the economic impacts are undeniable. A boutique manager in downtown Laredo, who didn't want to give her name, said business has nose-dived since December, when crime across the border got out of control. "Now, we're really scared," she said. "That's the word for it because I used to attend 20 to 30 clients an hour. Less than a year ago, I couldn't sit still for a minute because I was helping customers, one after the other. And today, all of this morning I've only had two clients." The steep drop off in commercial activity is evident throughout downtown Laredo in the empty storefronts and the "for rent" or "closed until further notice" signs posted on front doors. Lots of these stores sold wholesale to Mexican retailers, so they depended on shoppers coming across the bridge. But a rash of extortion, arson, and kidnappings for ransom have forced many of those small business owners in Mexico to shut their doors. Criminal activity including highway robberies and car-jackings in northern Mexico have prompted shopkeepers to stay away from Nuevo Laredo and look elsewhere for their merchandise. These dangerous conditions have affected another important source of revenue for both Laredos: tourism. "It has really hit us hard," said Raul Perales, manager at La Posada, a historic hotel right on the Laredo, Texas riverfront. "We used to average roughly 10, 15, tour buses a month. We don't get any anymore," he said. Buses from the US and Northern Mexico used to regularly shuttle travelers back and forth. The downtown areas of the two sister cities are within walking distance of each other. Mexican tourists can visit the border region on easy-to-obtain day passes to shop for items like electronics and brand name clothing. The big attraction for Americans was the ability to cross over into Mexico for quick trips: eating, souvenirs, and nightlife. The Texas city's tourism director Blasita Lopez said she used to facilitate travel between the two Laredos but not anymore. "It has been about a year since we've had somebody who has come and said, 'can you tell me about traveling into Nuevo Laredo,' the travelers who used to come in to go to the mercado, or who wants to go have a few margaritas and come back, we don't see that anymore," she said. While the absence of tourists and proliferation of empty storefronts are the most visible signs of how the situation in Nuevo Laredo is affecting its Texan sister city, perhaps the most profound impact on Laredo residents is the abrupt change to the region's bi-national lifestyle. "It does make us think twice about going across," said Laredona Ana Lopez. "I mean, I'm not afraid of going — I just don't take my kids. My kids are 15." Ana Lopez said what she misses most are the little things that were part of her family's routine. "My kids used to go to the dentist, to the doctors. You know, if we'd get sick, we'd go across because they're there 24/7. But at this point, it's kind of difficult to go at a certain time over to Nuevo Laredo because of the situation," she said. "We used to go a lot, just to go eat at the little carts that they have, for whatever, and we don't anymore. It's not that we don't want to go, it's that we're just cautious now." Lopez said when she does cross, she makes sure to be back before nightfall. Like many other Laredoans, Lopez has family on both sides of the river. So in addition to the economic impact, the violence and insecurity in Nuevo Laredo — along with ever-more-strict border policies — have separated many families who live literally within minutes of each other.