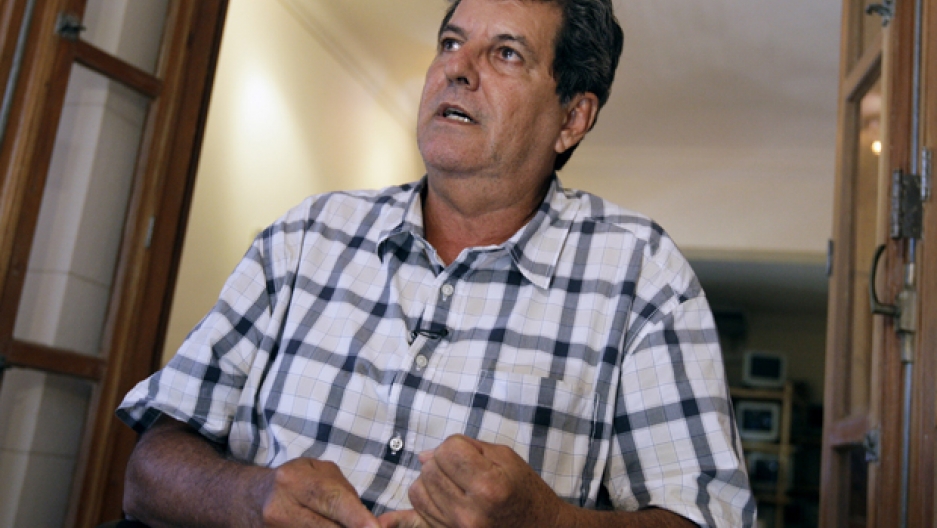 Cuban dissident Oswaldo Paya talks to Reuters during an interview in Havana on September 8, 2010. (Photo by Enrique De La Osa/Reuters.)

The White House called Cuban dissident Oswaldo Payá a “tireless champion” in “the nonviolent struggle for freedom and democratic reform.”

Payá died Sunday in a car crash in eastern Cuba. The accident has been called suspicious by some; his daughter called it murder.

Sweden’s foreign minister, Carl Bildt, called his death “a tragedy, a loss for the world.”

From an early age, Oswaldo Payá voiced his displeasure with Castro’s communist government. In his late teens, he was sent to a work camp as a punishment for speaking out.

Payá wanted to major in physics at the University of Havana, but the authorities forced him to leave, citing his anti-Marxist beliefs. He eventually found work repairing electronic medical equipment.

In 1997, though, Payá became an activist, and a year later, he began his best-known reform effort, known at The Valera Project. Payá and a group of dissidents began collecting signatures for a petition calling for democratic change.

“He took the rules of the Cuban government, and he really used them to challenge the system from within,” said Nik Steinberg, Cuba researcher for Human Rights Watch. “He looked at a provision of the constitution in Cuba that allows for citizens to call for change of policy on the island if they can collect 10,000 signatures. And what Payá and his fellow organizers did is that they went out and got people to sign this petition. Really there was nothing like this that had ever happened before in Cuba.”

Payá presented the petition to the government in 2002. The Cuban government reacted by throwing out the signatures, and declaring Cuba’s form of government was immutable.

Later that year, Payá was allowed to travel out of the country to receive the European Parliament’s Sakharov Prize for Freedom of Thought.

“You have granted this prize to the Cuban people,” Payá said at the ceremony. “Because thousands of Cubans have signed the petition, they are making a decisive contribution to the changes that Cuba needs.”

But in the months that followed, more than 70 of Payá’s fellow dissidents were rounded up and jailed. Payá himself wasn’t imprisoned, but he was the subject of continued harassment.

The Varela project couldn’t continue. But, according to Steinberg, that doesn’t mean it didn’t make a difference.

“After the Varela project, and the repression that followed, there was no way the Cuban government could claim there was no grassroots support in Cuba for greater change," he said. "It eliminated that argument of the government that nobody in Cuba had issues with the government’s lack of political and civil freedoms.”

He was never bombastic or load, says Steinberg. Instead, he was always level-headed, and pragmatic.

As one of Payá’s neighbors told the Associated Press, “he was a very humane person, very easy going. He has done many good things.”