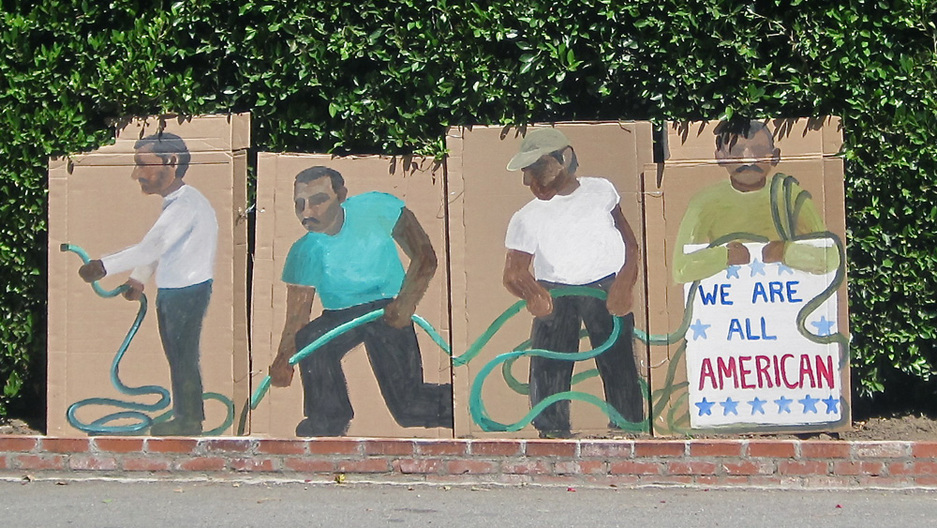 Artist Ramiro Gomez placed this cardboard cut-out near actor George Clooney’s home when he was hosting Pres. Obama for a fundraiser. The Secret Service asked Gomez to remove it. (Ramiro Gomez)

Life size cardboard cut-outs of gardeners, nannies and housekeepers are popping up on streets and parks all over Beverly Hills in California.

They’re the work of 25-year-old artist and nanny Ramiro Gomez, who says he wants to bring attention to what he calls the “invisible workers.” Gomez says these mainly Latino workers help raise the children and maintain the homes of wealthy Hollywood residents, but go largely unseen.

“These people do hold up a specific amount of society on their backs and on their hard work. They’re upholding households (and) taking care of families, so that the families can go on and live their lives,” Gomez said.

The faces on the cardboard cut-outs are purposefully vague, lacking in crucial details like eyes, noses, and mouths. They’re painted very lightly in acrylic, just to represent the image of the workers.

“There’s no details for the fact that when we drive by the real people, we don’t have the time necessarily to observe the details: their eyes, their nose, their moles, and their imperfections. We just have time to view the physical outline and my cardboard cut-outs are interpretations of that,” Gomez said.

Gomez is the son of Mexican immigrants, and was born and raised in San Bernardino, Calif. He has been painting the cut-outs and propping them up around town for the past eight months.

He starts by painting the images onto recycled cardboard he gets at Best Buy stores, then cuts them out and places them in parks and at busy intersections around town.

The idea for his project stemmed from his own experiences as a nanny. Gomez worked in a home in the Hollywood Hills, where his boss kept plenty of home décor magazines around. He began implanting the people that he would observe actually working in these homes by painting them into the magazines. Gomez said that started a conversation about workers' invisibility and how they were rarely mentioned or acknowledged.

Gomez said the cardboard designs don’t last long in the community. They typically stay in the neighborhood for a day and wind up being taken down by the gardeners and workers themselves.

“I choose hedges at the edges of the household. They’re usually maintained by gardeners and when a gardener comes in to do his job, a cardboard cut-out’s in his way, so the funny thing is they usually are the ones that have to bring it down themselves, so they can do their job,” Gomez said.

Even Gomez has had to take the cut-outs down. When President Obama visited the neighborhood for a fundraiser at George Clooney’s home, Gomez put four cut-outs of gardeners with a hose a few blocks away. The Secret Service ordered him to take them down and move them to a public park.

“There was a lot of Occupy Wall Street members representing the issues with the distributions of wealth and it was interesting to place my cardboard cut-outs of four gardeners with a connected hose working, and seeing the reactions from the other people in support and in unison, and it was hopeful,” Gomez said.

His cardboard paintings have made quite an impression on residents, the workers portrayed in the cut-outs and on Gomez’s bosses. His paintings are, in fact, a very obvious statement about his bosses’ lifestyle.

“I’ve been lucky enough to have some pretty good bosses that have kept my interests in mind, and I’m also able to speak English and protect myself,” Gomez said. "But when I do these paintings, it’s not about me. It’s not about my own experiences, more so, the experiences of others that, again, are not able to join the conversations.”

Gomez said one real issue is most people who employ people like Gomez don’t provide healthcare.

"I’m not trying to say that what they’re doing is wrong, because I benefit from their money," Gomez said. "But the funny thing again, is, the bosses will shortchange, and say, ‘I can only pay you a certain amount,' but yet, are comfortable enough to then go and turn around and buy something for themselves."

Gomez’s work has recently drawn attention from galleries, on art and lifestyle blogs and at universities. In May, Gomez gave a lecture on his artwork at UC Santa Barbara, and UCLA is planning an exhibit of his work. But Gomez is unfazed by the attention.

“A gallery show is great, but I think the possibilities in this day and age to reach a wide audience through social media, through public displays like what I’m doing, are even more rewarding. And I think, are a lot more challenging to the system than I think a gallery show would be,” he said.