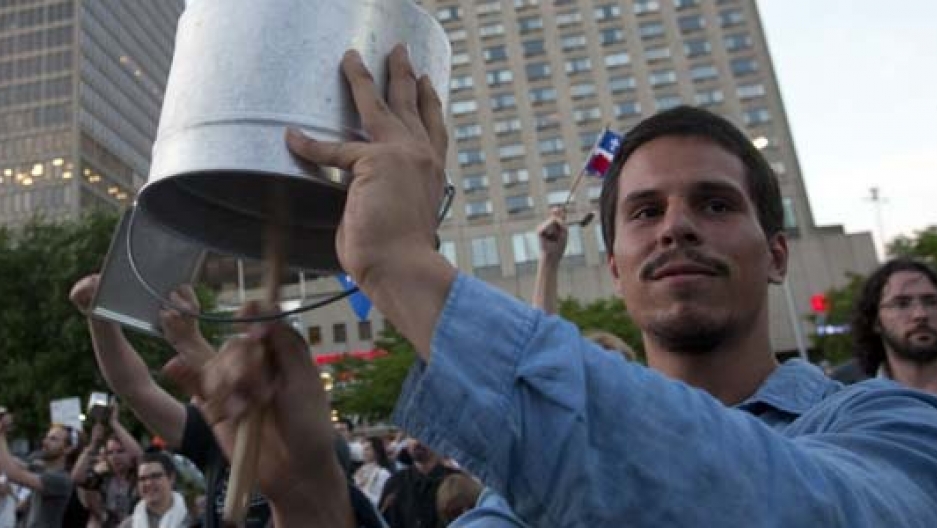 Protesters hit pots and pans as they march during a protest against tuition fee hikes through the streets of Montreal May 26, 2012. REUTERS/Olivier Jean (CANADA - Tags: CIVIL UNREST EDUCATION)

Share
Thousands of students marched through Montreal's commercial district recently, chanting, pounding on pots and pans. Most, like Gretchen King, a communications student at McGill University, wore bright red ribbons, the symbol of a movement that has rocked this city for three months. "I'm here to protest the tuition hike," King said, "which has yet to be negotiated in any way by the Liberal government." On this night, the march continued well past midnight, the crowd swelled as it snaked through neighborhoods and parks. One young man wearing the black jersey of the anarchist movement set off a massive firecracker. The crowd seethed as cops in riot gear move in to make an arrest. Protests like this one have become commonplace here, with two or three demonstrations each day. Earlier this month, students shut down the Metro with smoke bombs. "I don't think there are a lot of police services in North America that have lived through 260 protests in 120 days; it's a lot," said Ian LaFreinere, a commander with Montreal police. YouTube videos have circulated widely, showing cops in riot gear hosing crowds with pepper spray and using what critics describe as excessive force. More than 2500 people have been arrested so far, a handful on terrorism-related charges. Lafreienere acknowledged that police are exhausted and frustrated. But he said the city is doing its best to maintain order. "It's hard also because you face people throwing rocks at you. So you need a lot of tolerance, a lot of patience," he said. But a growing number of political observers say Quebec's government has mishandled the protests. In a speech broadcast last month on RDI television, the province's Premier Jean Charest seemed to mock the students. Montreal's Mayor, meanwhile described protestors as kids, who should be "brought to heel" by their parents. "In effect, they treated the students like children," said Antonia Mainoi, a professor of political science at McGill University. "And the students are not children. They are adults, and many of them idealistic, many of them impassioned by this struggle." After first discounting the protests, she said, the Charest government then over-reacted in the opposite direction. His government pushed through a controversial emergency measure earlier this month called Law 78 that restricted street marches and political rallies including more than ten people. It also required students to move picket lines that block access to college buildings. In a province where street protest is part of the culture, Professor Maioni said Law 78 sparked an immediate backlash. "So there are many people who are saying now, I'm not for or against tuition hikes — it's not about tuition hikes anymore. It's about what the provincial government is trying to do to our freedom of expression." Maioni said the protests have also widened to include a debate over other austerity measures that the Charest government has proposed, as a way to ease the province's growing budget deficits. For their part, protestors seem delighted at what they view as Charest's missteps, and have taken up mocking him in return. Protestor Gretchen King said a movement that began over tuition hikes now hopes to topple the provincial government. "A growing number of people say that Charest should resign," King said. "That's what the conclusion has been — not that he's messed up, but that he should be gone." Political pressure is growing here as Montreal moves toward its crucial summer tourist season and hotels are reporting a drop-off in visitors. Charest has already sacked two top officials in his cabinet, including Quebec's education minister. Negotiations with students continued today.