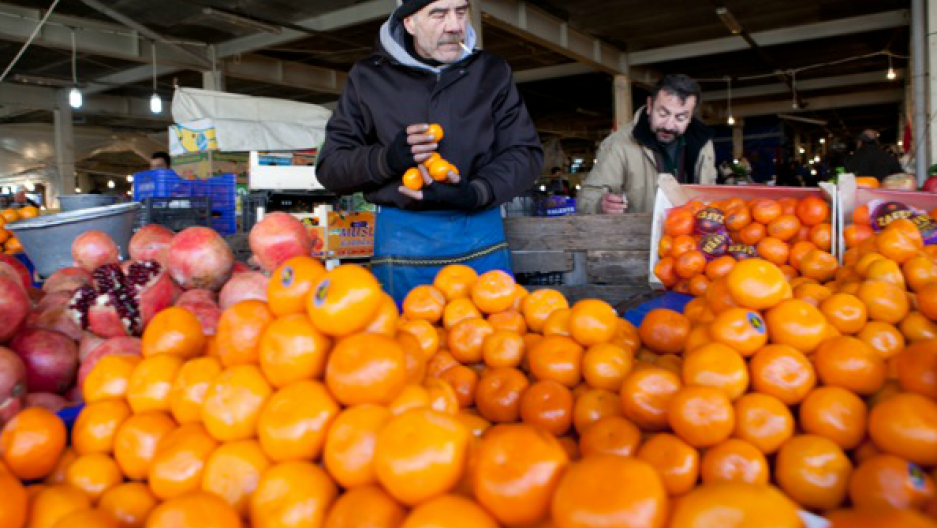 Vendors examine their wares at the Istanbul market. They're no longer allowed to shout out in an effort to get customers. (Photo by David Trilling.)

Yuksel Ozevin is singing about his pomegranates. Soft as compared with some of his colleagues. There's a new noise ordiance in town, demanding the vendors keep their voices low. No shouting.

He says it's ludicrous.

“Imagine going to a stadium to see a soccer game,” Ozevin said. “Would you enjoy the game without shouting? Bazaars are just like stadiums, if you can’t shout there is no joy.”

Mehmet Karlidag is letting shoppers know he is selling anchovies from the Black Sea, otherwise known as the Rose of the Black Sea. He says everyone knows they are much tastier than the ones from the Marmara Sea.

“I swear its nothing but rubbish,” Karlidag said. “When we shout we attract customers. If I’m selling something for seven lira a kilo, and someone else for nine, they can come and buy from me if it suits them.”

City officials say they will respond to noise complaints first by giving vendors warnings. Then there will be fines. And finally, vendors could lose their licenses.

There’s no question that this market is a noisy place. But most shoppers don’t seem to mind. Turgut Denizci doesn’t get what all the fuss is about.

“This is a tradition normally, they shout their products,” Denizci said. “It doesn’t bother me, unless they go over the top and shout too much, but this is OK.

Denizci says the new law could change the feeling of Istanbul’s commercial culture.

“It will be quiet, it won’t have the same atmosphere,” he said. “This is not a supermarket, it’s an open air market.

But some think the tradition is annoying and backward. Kamuran Dericioglu hates shouting, and wishes Istanbul officials cracked down harder. She says shouting is characteristic of Turkey’s undeveloped society.

“When the level of education rises, the more enlightened people are, the more quietly they speak,” Dericioglu said. “The sellers are so economically deprived that think they will get what they want just by shouting loudly.”

When he sees a microphone, Mehmet Sami Eviz starts singing about his beautiful tomatoes, drumming on the tin bowl from his scale. Then a colleague joins in.

Eviz says he’s famous in the market for having the most beautiful singing voice. But he says the vendors are resigned to the tighter restructions.

“Personally I will not resist whatever the lawmakers decide,” Eviz said. “All of our necks will be thinner than a hair when our heads are placed in the guillotine.”