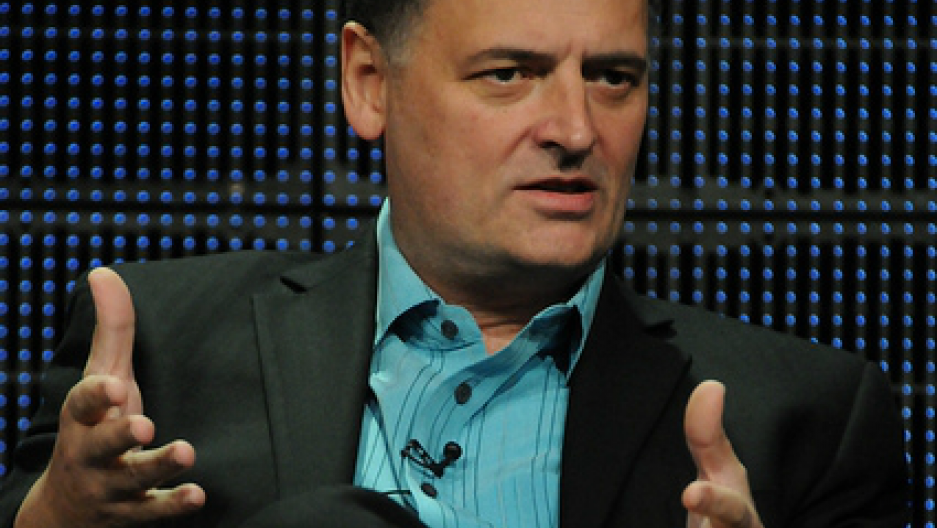 Steven Moffat is the man behind the reboot of Sherlock Holmes. (Photo by Jake Landis/PBS.)

If you're a fan of the reboot of British sci-fi TV series Doctor Who, Steven Moffat is the patron saint of nerd cool.

This Sherlock is set in present-day London, with re-imagined villains, high tech crimes, and lightening-fast dialogue.

The new Sherlock has “cleared away the dust. It stopped being a heritage drama, set in the 19th century where everyone wears a nice frock," Moffat said. "It was never about that. It got it back to being fast-paced, sometimes quite silly, thrillers."

The detective’s iconic calabash pipe is replaced by a new essential accessory: an iPhone. And we watch the data he dissects flash across the screen as text messages and blog entries.

"You actually see a part of his thought process appear on screen," Moffat described. "It's how Sherlock sees the world. He actually sees deductions floating in the air in front of him. And that's become sort of our signature, I suppose, visually."

"The original Moriarty is suave, accomplished, a relatively typical super-villain,” Moffat said. “Over a century later, that kind of villain seems rather cozy. In the suicide bomber age, we're frightened of people who don't prioritize their own survival."

Since Doyle’s time, critics have argued that Sherlock shares the same inability to experience human empathy. But Moffat resists that diagnosis.

“He’s a man who chooses to be the way he is because he thinks it makes him better. It’s a monastic decision. He takes himself out of touch with his sexuality, out of touch with any of his emotions, in order to make himself better," Moffat said. "And the reason he's apologetic and shameless is he’s happy in his own skin. He's actually having quite a good time.”

The second season of Sherlock debuts on PBS Masterpiece this Sunday, May 6.