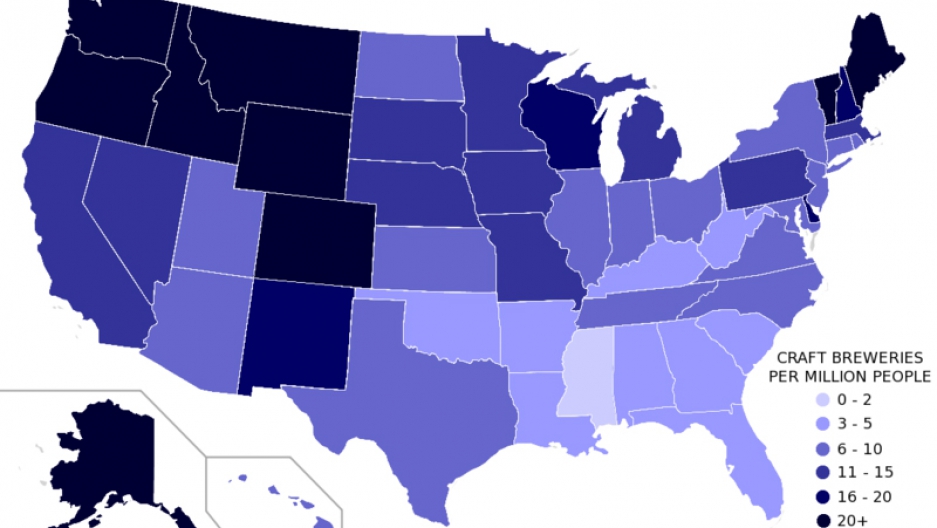 Craft brews are sweeping the nation, and are increasingly becoming staples on liquor store shelves.

According to the Brewers Association, Americans’ consumption of beer dropped a little more than a percent last year. But, you wouldn’t know that looking at all the choices. Turns out that while Americans may be drinking less beer overall, they are drinking more beer from small, independent brewers.

In fact, many small, independent beer makers are thriving. There are now more than 2,000 in the country, employing more than 100,000 people.

“There are now more than 140 beer styles and 13,000-plus beer labels in the marketplace. I think you’ve got a localization in our culture going on, people getting back to being more informed about what they consume and enjoy,” said Julia Herz, craft beer program director at the Brewers Association. “Look on the restaurant level, the same thing is happening with beer. And supporting your local brewery is becoming very important to many beer lovers.”

Craft beer retail sales totaled $8.7 billion last year, up 15 percent from the year before. This week, beer makers from across the country are gathering in San Diego for the annual Craft Brewers Conference and to get ready for American Craft Beer Week, which runs May 14 to the 20.

Herz attributes the surge in popularity of microbrews to an increased focus on local — local food, local consumer products and, yes, local beer — among American society.

"It's people being more informed about what they consume and enjoy," she said.

Brewing beer isn't just confined to commercial operations though these days. Herz said some 750,000 people home brew, or make beer in their basements and garages to enjoy with family and friends.

To be a commercial brewer, and to sell your product, you have to go through licensing and inspections, both with state liquor control agents and with health inspectors. Home brewers typically don't face those requirements.

"It's one of the most highly regulated and highly taxed businesses to try and get into," she said.

Herz, a cicerone, something like a sommelier of beer, said beer is developing some of the elaborate tasting rituals that other alcohols, like wine, have long enjoyed. But, she cautioned, people try not to take things too seriously. It is beer, after all.

The surge in craft brewing has also led to innovations in packaging as well. Whereas most craft brewers once distributed strictly in glass bottles, aluminum cans have become increasingly common.

"You won't have influence from sunlight or fluorescent light, and that will prevent something called skunking," she explained. "As sunlight hits a beer, it can and does change the flavors and give you some sulfur-aromatics."

The whole evolution toward craft-brewing has captured the attention of the major breweries as well. Anheuser Busch, before it was bought by InBev, had investments in several craft brewers. In 2011, the combined company, Anheuser Busch-InBev bought Goose Island Brewery out of Chicago — one of the larger craft brewers in the middle part of the country.

They're also creating their own recipes that have more of a microbrew quality to them.

"The large brewing companies do have versions of beers that we're starting to see from them that we refer to as domestic speciality brands," she explained. "It's anyone's guess where that will all go."