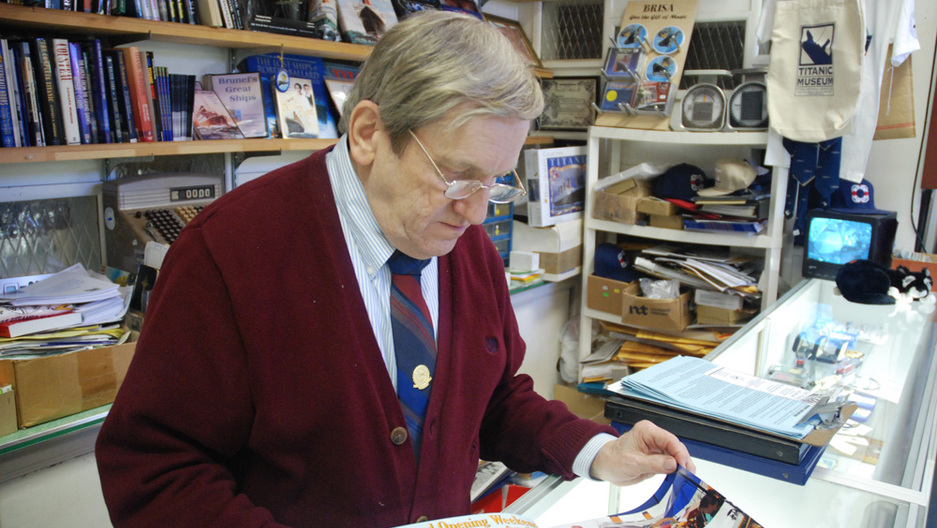 Edward Kamuda runs the Titanic Historical Society out of the back of a stationery store in a quiet neighborhood in Springfield, Mass.

Kamuda's fascination with the history of the Titanic began when he read a short story called "A Great Ship Goes Down" as a young boy. Kamuda's big break came several years later when his father, who ran a movie theater, booked the film “A Night To Remember,” and the then-teenaged Edward Kamuda got his hands on a press packet for it.

"Inside the folder were about 85 names and addresses of survivors that were still alive," Kamuda said. "It was done in the hopes that if you were a theater manager and there was one person living nearby who was a survivor you might invite them as your guest. You'd notify the press and get a lot of publicity. I spent the rest of the summer writing to them. Just about all of them replied to me."

Kamuda started the Titanic Historical Society, the largest society of its kind, in 1963 after learning about one survivor whose possessions had been discarded after death.

"Because he had no immediate family, all his materials were thrown in the city dump. I was aghast at this. I said my gosh, they're throwing away history," Kamuda said. "And so in my next letter to the survivors I said we're going to preserve all of this."

Kamuda has held onto these letters and gleaned incredible stories from the survivors of of the sinking, both about their experiences on the Titanic, and their lives afterwards.

Kamuda says it was difficult for many Titanic survivors to speak about the event.

“A lot of them kept it very quiet, they didn’t want to talk about it – it was a horrible, horrible experience,” he said.

Frank Goldsmith was seven or eight years old at the time of the sinking, and told Kamuda baseball games were hard for him to take.

“He said every time he’d go to a ball game and somebody would hit a home run,” Kamuda said. “That roar from the crowd reminded him so vividly of that night and the people screaming in the water.” Goldsmith lost his father on board the ship.

Kamuda says his favorite survivor is Gurshon Cohen, called “Gus the Cat” for his uncanny track record of survival.

Cohen survived the sinking of the Titanic by sliding down the ropes that were lowering the lifeboats. He was wearing a pair of gloves his mother had given him before he left England, which saved his hands from being torn apart by rope burn.

Director James Cameroon hired Kamuda as a consultant for his 1997 blockbuster film "Titanic." In return, Cameron invited Kamuda and his wife to make a cameo appearance in the film.

“It’s just after Jack teaches Rose how to spit like a man,” Kamuda said. “And they meet up with Molly Brown, and she invites him to her cabin to get him some proper clothes to wear for the big dinner, and we come walking by. We did the scene eight times because Kathy Bates kept on cracking jokes and breaking everybody up.”

"It was quite thrilling, having worked in my father's movie theater till age 16 for so many years, and now here I was on the big screen," Kamuda said.