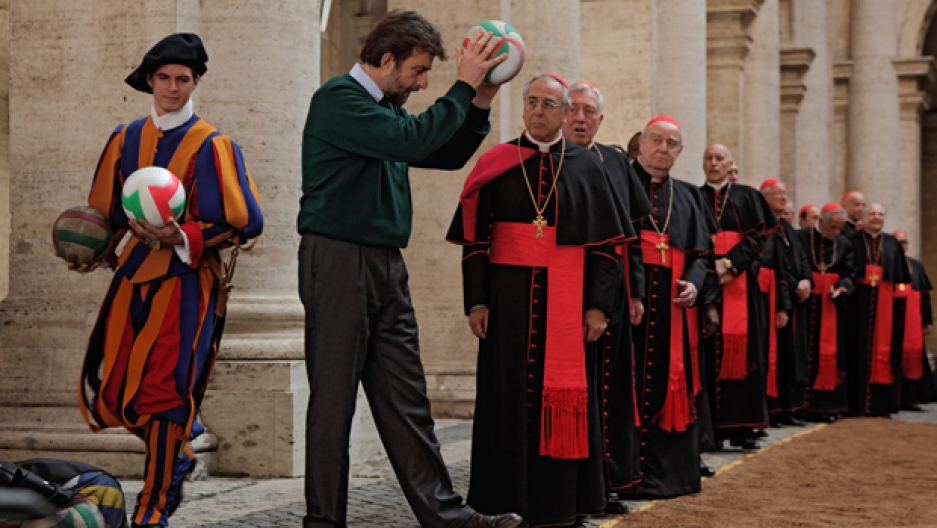 Nanni Moretti in 'We Have A Pope" (Photo: Philippe Antonello)

Share
Pope Benedict XVI is known for his firm leadership style. Firm, confident and not open to questioning. The fictional pope in Italian director Nanni Moretti's latest movie, "We Have A Pope", is the opposite: besieged with doubts, about himself and about the role he is called to fill as the Catholic Church's infallible leader. The film begins with cardinals from all over the globe gathering at the Vatican for a pope's funeral. Then comes the new pontiff's election behind closed doors in the Sistine Chapel. It all looks like the real thing, and that's how the director wanted it. Moretti said he researched real conclaves and real cardinals so he could build a realistic framework for what he called a "non-realistic" film. "I would say it's a dramatic comedy," said Moretti. "Better yet, a painful comedy. Or an ironic drama." That ironic drama emerges early. As the cardinals gather to select a new pope, it's clear they don't know who to choose. And not one of them wants the job. Each cardinal begins to pray, begging God not to pick him. But after a number of ballots, a new pope is chosen. He's a back-bencher, a French cardinal no one seemed to notice before. You can tell he's not thrilled, but all seems to be going as planned. That is until the crucial moment, when the new pontiff is supposed to be presented to the faithful crowding St. Peter's Square. A scream cuts the presentation short. It's the new pope, having a nervous breakdown. He can't face the crowd, and retreats into his quarters. A psychiatrist, played by Nanni Moretti himself, is called in by the Vatican to help the pope overcome his doubts and insecurities. But it doesn't work as planned. In coming up with that scenario, Moretti was inspired by something he learned about the men who have become popes in the recent past. "All those cardinals, at the moment that they became pope, claimed to feel terrified, not ready, inadequate," said Moretti. "Even Ratzinger said that," he continued, referring to Pope Benedict's name before he was elected pontiff. Moretti described himself as a lapsed Catholic and a non-believer. He said that allows him to give his on-screen pope and cardinals more humanity. And that offers a clue as to what Moretti is really getting at with this movie. He wasn't really out to send Catholic authorities a message. He wanted to highlight something all human beings can relate to. "This film is about our struggle to fulfill roles that others assign us, or that are assigned to us by fate, or by God for those who believe. Or that we assign ourselves," said Moretti. "This is a theme in many of my movies. There is always a gap between what we ask ourselves to do, and what we are actually able to do." "We Have a Pope" came out last year in Europe. It's United States release is scheduled for Good Friday, in New York and Los Angeles.