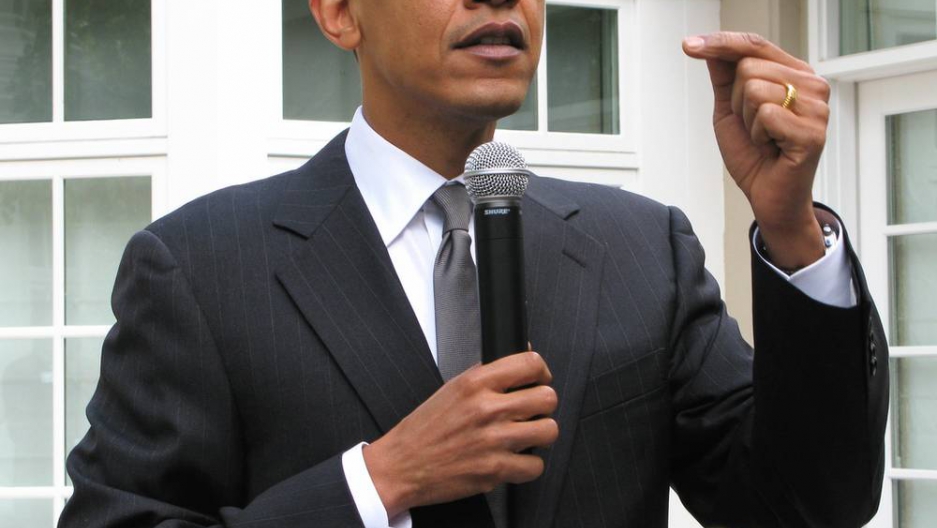 In a new move, President Barack Obama is standing up for his signature legislation by encouraging supporters to celebrate the term "Obamacare." (Photo courtesy of Flickr user Steve Jurvetson.)

"Happy Birthday, Obamacare. If you're tired of the other side throwing around that word like it's an insult, then join me in sending a message that we're proud of it."

In recent campaign speeches, Obama has hijacked and re-purposed the pejorative as well.

"I have no problem with people saying Obama cares," said the president. "I do care."

The president's Twitter account has even started a hashtag campaign #ilikeobamacare to start a conversation about what supporters like most about the Affordable Care Act. It's a bit of linguistic evolution taking place right before our eyes.

According to Kathleen Hall Jamieson, director of the Annenberg Public Policy Center at the University of Pennsylvania, recasting words to create new meaning is a staple of the political dialogue.

"There were initially very strong attacks on Social Security and Medicare as names and as concepts. Now people of all ages regard them as so integral to the way that government operates," Jamieson said. "So across time words change meaning as we live out the experiences that are being named by the words."

Jamieson thinks social networking and the rapid transfer of information impacts the rate at which words change meaning.

"Twitter is a digestive means of alerting and linking, so when words become linked to the masses and move inside the culture, they diffuse more rapidly," she said.

Before the Obama administration embraced Obamacare, the word, Democrats often bristled at the term.

In an interview with the Washington Post, Obama campaign spokeswoman Stephanie Cutter said Democrats needed to reclaim the term from Republicans.

"On Obamacare, Republicans spent hundreds of millions branding Obamacare as a negative, and we believe we can turn that to our advantage,” Cutter said. “The term is incredibly popular with the president’s supporters, who will fight to the end to defend the law after 70 years of work to pass health reform.”

According to Jamieson, reclaiming Obamacare involves more than simply using the term in a new way.

Jamieson believes that slapping too much meaning onto words in the political sphere dilutes their meaning.

"There are a lot of reasons to like health care reform and there are a lot of arguments against it," said Jamieson. "Neither side is well captured by calling something 'Romneycare,' or 'Obamacare'..it becomes a signal that you oppose or favor a person rather than an issue position or a piece of legislation."