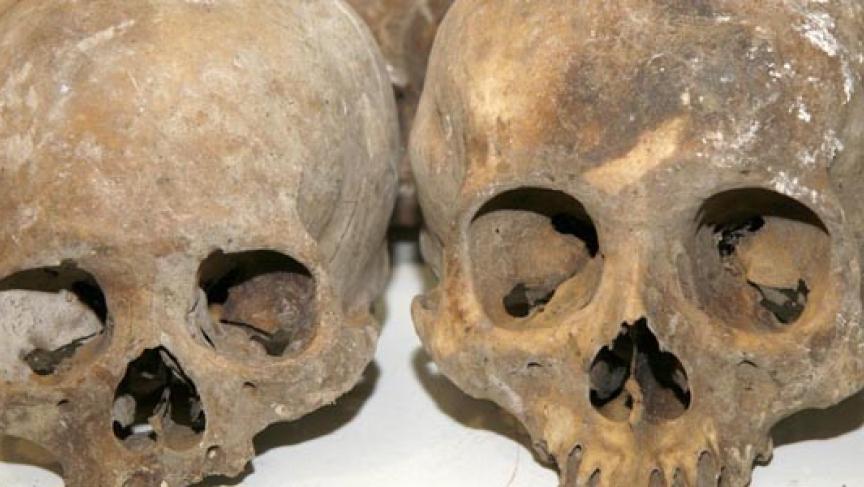 More than 100 skeletal remains were recently found in a cave in Southern Mexico. (Photo courtesy of the Chiapas state attorney general's office.)

Earlier this month, the skeletal remains of more than 167 people were discovered in a cave in Chiapas, Mexico.

Initial reports suggested the find may have been a mass grave. It wouldn’t have been the first such discovery in Mexico in the past year. Mass graves have become an increasing common discovery as the country’s drug war rages on.

But the human skeletal remains found in that cave in Frontera Comalapa turned out to be unique. It wasn’t a mass grave, but a pre-Columbian bone deposit.

“This is like the first time that’s happened, at least in my administration here in the state,” said Emiliano Gallaga, director of the Chiapas office of Mexico’s National Institute of Anthropology and History, known as INAH.

The institute is the official caretaker of Mexico’s physical ancient history, like the remains in that cave. INAH should have been contacted before the bones were taken from the site, but that didn’t happen.

“My guess is that the person who discovered the cave with a bunch of skeletons got scared and called the police,” Gallaga said. “They saw there were a bunch of bones and they freaked out, because (of the) narco violence that we have. So they came right away, they collect the stuff, and they took it. And finally someone said, ‘wait a minute, this looks old.’”

Gallaga said it wasn’t until after the remains were removed that INAH staff were consulted. Because the find occurred over a weekend, they were only sent photos. Given that some of the skulls showed evidence of intentional cranial deformation, a practice used in ancient Mesoamerican societies, anthropology officials told police medical examiners that the bones could possibly be pre-Columbian.

Authorities from the state attorney general’s office held a weekend press conference to announce that this was not a recent mass grave, and the story soon dropped off the news radar. That left some important details ignored and questions unasked. First, how could an archaeological site have been mistaken for a modern-era crime scene?

According to local media, state police and soldiers took a mere 15 hours to empty the cave of its remains. Video and photos from the crime scene show that authorities raked up bones with a hoe and stuffed them into bags for transport.

After analyzing the visual documentation, Haglund was bothered by tell-tale signs of reckless handling of the remains.

“There were busted crania, there were recent fractures of bones,” Haglund said. “They stuffed them all into large bags and I understand they did it very, very fast and just wrecked it for history. And the disrespect for the remains was just horrible.”

Crime scenes and archaeological finds share an important characteristic; diligent documentation from the start is crucial to understanding how and why remains got there.

“Once you’ve changed the context, it’s gone, it’s destroyed. And that’s what they’ve done,” said archaeologist James Brady at California State University in Los Angeles. “They’ve completely destroyed that site. They’ve raped it. To me, all of that bone that they’ve recovered is of negligible value without the context.”

Brady specializes in the study of caves in ancient Mesoamerica. He said that, while it’s common to find human skeletal material in caves, this particular discovery was huge.

“We haven’t had a cave with this many burials in that area before. And so to have something of this magnitude utterly destroyed is just awful," he said.

According to the Chiapas state attorney general’s office, state police and soldiers participated in the removal of the remains from the cave. Even if the find in Chiapas had been a mass grave, it would not have been the first time authorities have radically departed from standard crime scene protocol. The largest of these modern-day grave sites have been found in and around the state capital of Durango. At least some of the 300 bodies which have been uncovered were damaged by the use of heavy machinery to extract delicate, decomposing remains.

“It sounds to me like they’re not really invested in solving anything,” said forensic anthropologist William Haglund.