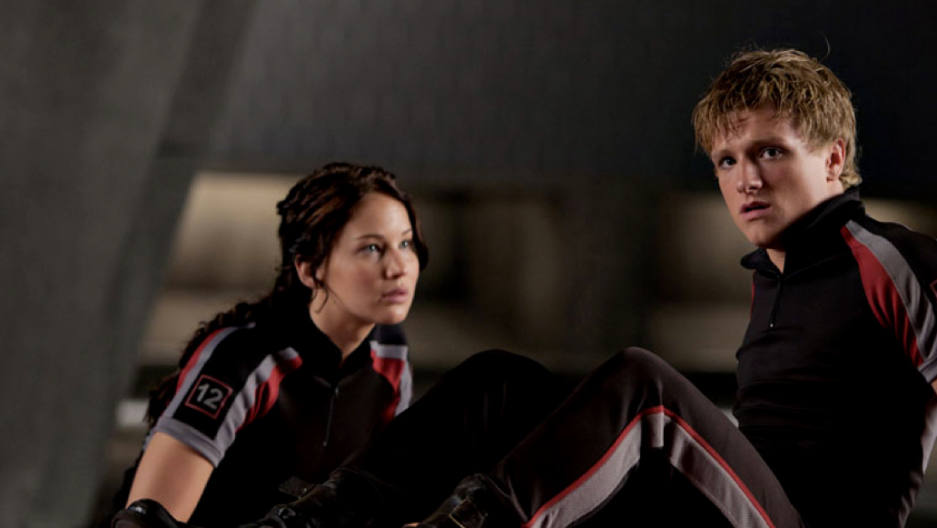 Katniss Everdeen (Jennifer Lawrence) and Peeta Mellark (Josh Hutcherson) will make their big screen debut this weekend in The Hunger Games. But they've been portrayed on small screen for years — by fans. (Photo by Murray Close for Lionsgate Films.)

This weekend, The Hunger Games opens, and it’s likely to be one of the year’s most successful movies.

Based on the trilogy of dystopian young adult novels by Suzanne Collins, it’s about a teenage girl named Katniss Everdeen living in a future, totalitarian North American nation called Panem. Each year, the country’s impoverished 12 districts send two teenagers each to the capital for a spectacularly brutal ritual: a televised fight to the death, in which the victor brings home food and other aid for his district.

Children kill each other on national television — it’s Lord of the Flies meets Survivor.

First published in 2008, The Hunger Games lures readers in with a plucky female protagonist and a plot filled with political injustice, bloody hand-to-hand combat, and a love triangle. While the first film comes out this weekend, some enthralled readers didn’t wait for Hollywood to put the book on screen.

Not long after it was published, fans started filming scenes and posting them on YouTube — there are hundreds of videos there now.

One of the most popular videos, with more than one million plays, is by a group of teens in Pittsburgh who call themselves Books2Film. Director Hannah Snyder, 15, wrote a script for the entire book with a friend.

"We looked at it and we were like, 'Oh wait a minute. This is not practical,'" she explained.

So Snyder and her friends settled on filming a single dramatic scene.

Kim Shelby, a graphic design student at Southern Utah University, spent eight months producing a trailer (for a film that didn't exist) as her senior project.

The result belies the $300 budget.

"Everyone was really into it,” she said. “How often do you get to kill people on a Saturday afternoon?"

David Levithan, one of the editors of The Hunger Games trilogy, said he loves these videos — and that they beat Hollywood to the punch.

"Once the movie comes out, there's going to be an official screen version of what this story looks like,” he said. “I think it’s pretty awesome that hundreds of teenagers, and some adults, have gotten their vision out there first."