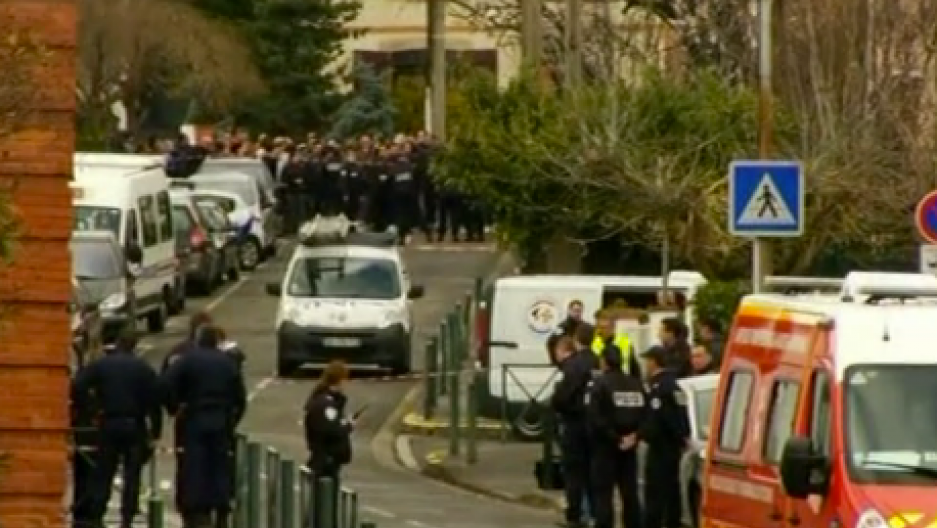 Law enforcement in police are trying to determine who is behind a deadly attack at a Jewish school in Toulouse. (Photo from Reuters video.)

A Jewish school in France was the site of a deadly shooting Monday, taking the lives of three students and a teacher. A fourth student was seriously wounded.

The shooter opened fire in front of and inside the school building in Toulouse before fleeing on a motorcycle. This is the third motorcycle attack in the Toulouse region in a week. In a previous attack, three French paratroopers, of Arab descent, were shot and killed while two others were wounded in two incidents, the Christian Science Monitor reported.

According to the New York Times, police in France say the same gun was used in all of the area shootings, prompting concerns of terrorism and of a serial killer on the loose.

"The killer “shot at everything he could see, children and adults, and some children were chased into the school,” Michel Valet, the local prosecutor, said to the Times.

Kate Davenport, a BBC reporter, said one of the victims, a young girl, was shot in the back while trying to run away, before being shot fatally in the head as the attacker continued to press the assault.

France has responded aggressively to the attack, with President Nicholas Sarkozy ordering stepped up security around all of the Jewish and Muslim schools across the country. Sarkozy, who's in the middle a bitter re-election campaign, broke away from the campaign to visit the school in Toulouse with national Jewish leaders. His primary opponent in the election, François Hollande, also headed to Toulouse, the Times reported.

France's prime minster said additional security was being ordered for all schools and religious buildings in France.

The BBC said that as the investigation into the killing continues police have identified the license plate that was on the motorcycle used in the attack. Also, at least 60 additional anti-terrorism police are already in Toulouse because of the earlier attacks.

"There's heightened security, very, very high security now," Davenport said. "There already was heightened security after the previous killings, but that was expected the target to be military and young men in their 20s. So, completely different target. Now it affects the whole community."

France has the largest Jewish and Muslim communities in western Europe, with about 500,000 Jews and about 5 million Muslims. Toulouse is the home of the greatest number of both.

Sarkozy called for a minute of silence on Tuesday at 11 a.m. to remember those who died.