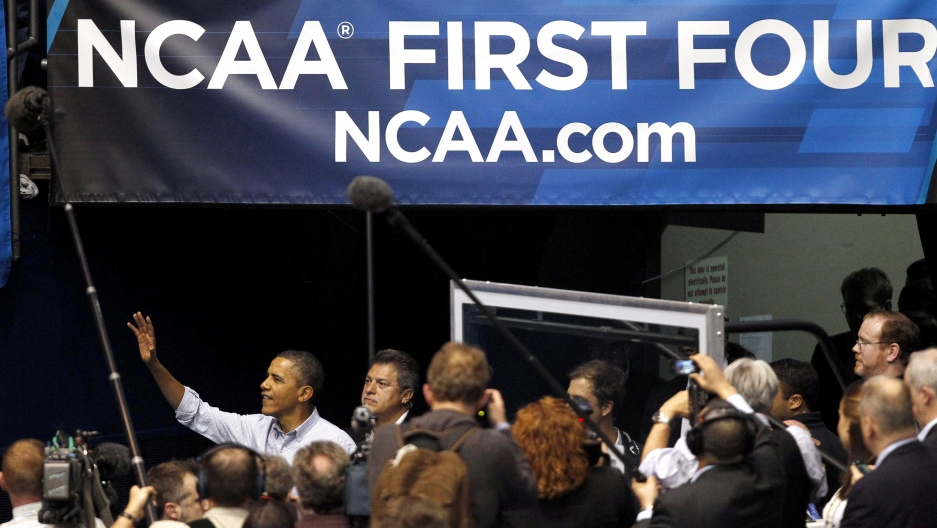 The NCAA Men's Basketball Tournament got underway on Tuesday with two of the First Four games in Dayton, Ohio. (Photo by Matt Sullivan/Reuters.)

March Madness is in full swing.

The first round of games got underway last night in front of President Barack Obama in Dayton, Ohio, with two more games on tap for Wednesday night. But those are just the First Four — eight teams competing for four slots in the traditional 64-team bracket.

The big games — the ones where a 12 seed can take down a 5, or even a 15 seed toppling a 2 — those start Thursday. That's when Harvard will step on the court to take on Vanderbilt, a 12-seed taking on a 5, Thursday night.

This is the first NCAA appearance for Harvard in a long, long time. The Crimson was last in the tournament back in 1946, when just eight teams were invited — a far cry from the mulit-week marathon that is the current tournament.

Doug Tribou, reporter for the Only A Game public radio station, said everybody at Harvard is really excited by the tournament opportunity.

"The team has gotten more support than they normally do," he said.

Keith Wright, a senior forward on the Harvard squad, said walking to class he'd received a lot of congratulations from fellow students he'd never met before — something that's probably familiar to athletes at perennial basketball powers like Kansas or Duke or even Kentucky, but is a bit more foreign to the Harvard players.

"It's nice, just feeling the love and genuine excitement for your team," Wright said. "It's awesome."

The excitement in Harvard Yard, though, doesn't extend to all their graduates. In fact, perhaps their most well-known graduate has the team losing their first round game .

That would be President Barack Obama, who has the Crimson losing to the Vanderbilt Commodores.

“I’ll be rooting for Harvard, but it’s just too much of a stretch,” he told ESPN Wednesday morning.