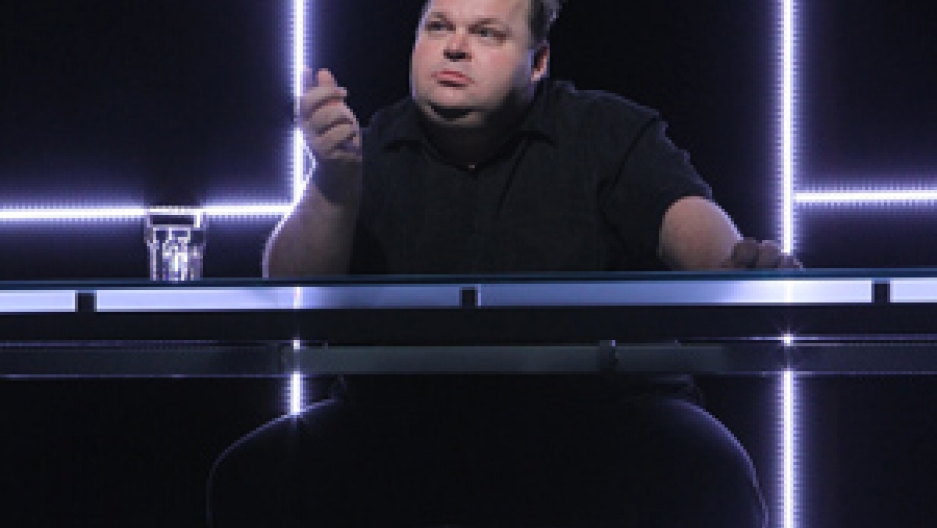 Mike Daisey in The Agony and The Ecstasy of Steve Jobs. (Photo: Joan Marcus)

Share
There's been lot of talk lately about the conditions in the Chinese factories that make our electronics–specifically our Apple electronics. A recent New York Times series examined the labor issues in the supply chain, and a one-man show now in New York and recently excerpted on the radio show This American Life introduces people to the Chinese workers in that chain. The show, called "The Agony and the Ecstasy of Steve Jobs," is written and performed by Mike Daisey. In the world of Apple geeks, Daisey's in pretty deep. "I am at the level of geekishness where, to relax after performances like this one, sometimes I will go back to my apartment and I will field strip my MacBook Pro into its 43 component pieces," Daisey admits early in the show. "I will clean them with compressed air, and I will put them back together again. It soothes me." In the show, which runs through March 18 at the Public Theater in Manhattan, Daisey describes how his obsession with Apple products led him to uncomfortable discoveries about how those products are made. He travels to China and talks to workers outside the massive Foxconn factory in Shenzhen, where a half-million employees churn out tons of stuff for Apple, HP, Dell, Nokia, and other electronics companies. During his time in China, Daisey hears stories of workers as young as 12, of nerve damage caused by sprays used to clean iPhone screens, and of debilitating injuries that could be avoided if workers were regularly rotated from one job to another. "Do you really think Apple doesn't know?," Daisey asks the audience. "In a company obsessed with the details — with the aluminum being milled just so, with the glass being fitted perfectly into the case — do you really think it's credible that they don't know? Or are they just doing what we're all doing—do they just see what they want to see?" Apple has lately stepped up its efforts to see—to monitor and report factory conditions. For the past few years the company has been conducting audits of their factories. The last report, released a few weeks ago, showed marginal improvement in six of the eight labor-related categories, though there's still a lot wrong. Independent monitors have just started inspecting Foxconn plants in China, including the one Daisey visited. And Foxconn just announced a 25 percent wage increase for some of its Chinese workers. In his dressing room before a recent performance, Daisey said these moves don't go nearly far enough. "They need to look at hours, especially–the incredible amount of overtime people work. They drive people into the ground." And he pointed to things deeper in the company's fabric. "They need to look at the entire way Apple releases products. Because when Apple releases a product, that wave of creating mania, the fact that all the people wait in those lines out those stores–that has a direct effect on the people that have to try and supply that mania. You know, people don't understand that that system can actually be deadly." Daisey thinks that, as one of the most powerful players in the tech industry, Apple can do a lot more to ensure that factories are safe. He says as much in a letter handed to people leaving his performances, writing that, if Apple put some of its profits back into its factories, it would "transform how all electronics are manufactured across the globe." Li Qiang, director of China Labor Watch, a group that sends undercover researchers into Chinese factories, says putting more money in the supply chain is crucial. And he's happy to see that this is getting attention in the theater of all places. "If Apple doesn't agree to share some of its profits with some of their factories and increase the production price, then there is no way the supply factories can improve their working and living conditions for their workers," Li said through a translator. Apple and Foxconn didn't respond to questions for this story. It's not surprising that American consumers, faced with these revelations about Chinese manufacturers, are looking at their electronics a bit differently these days. Ellen Hauptman and her husband Martin were coming out of a recent performance of "The Agony and the Ecstasy of Steve Jobs." "It makes me sick, really really sick," Ellen Hauptman said. Martin nodded in agreement. "He ends it by saying open up your computer and think about who made it, and I think we're going to do exactly that. And it's scary, really really scary." "I know that I walked out the door and turned my phone on, but I waited an extra minute. So I'm going to let that sink in." said Greg Mocker, who'd also just seen the performance. "We need these devices, we use them a lot–they're such a part of our lives now. I think that it's part of our responsibility to hear the story." Mike Daisey says that people who are concerned about the issues he raises in the show, and are wondering what they should do, are, in fact, already doing something. "Even being aware of it as an issue," he says, "and beginning to think about it now, and being conscious, and having those conversations, is actually… that's activism." Guo Ruiqiang worked for Chinese manufacturer Wintek, and has permanent nerve damage because of a toxic chemical he used to clean iPhone screens. He's 29, and pretty down about the future–about finding work and someone to marry. We reached him in his hometown of Xuchang in Henan Province and asked him, through a translator, what he would tell people just learning how their iPhones are made. He, like Daisey, thought that awareness was a start. "I hope fans of Apple will know that the products they use require us to make a sacrifice," he said.