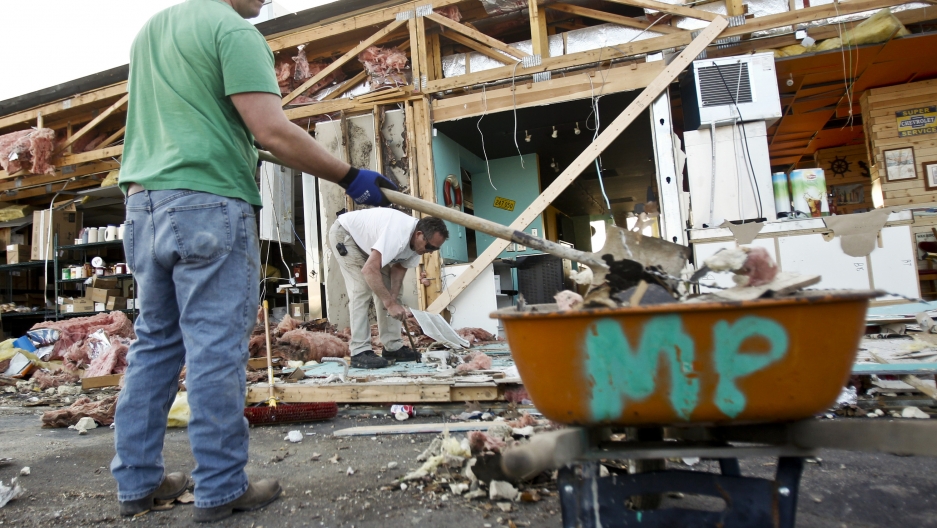 Trevor Caruso, left, and Rich Stein help clear debris from the damaged Burger Shack on the Strip in Branson, Mo. on Feb. 29, 2012. Powerful storms that spawned tornadoes ripped through the Midwest on Wednesday. (Photo by Sarah Conard/Reuters.)

A storm system moving across the Midwest in the early hours of Wednesday morning caused tornadoes from Kansas to Kentucky.

At least 12 people were killed. Six of the deaths were reported in the city of Harrisburg, Ill., where the most damage occurred. Tornadoes also badly damaged Harveyville, Kan., where three people were injured and one person was confirmed dead. But the severe weather also tore through country music resort town of Branson, Mo., damaging the heart of the city's tourist district.

It injured 37 people, but no one has died.

Raeanne Presley, the mayor of Branson, said her town has to count her blessings for that. Branson's no stranger to severe weatherIn the spring and summer southwest Missouri has many severe thunderstorm and tornado watches and warnings. It's also just down the road from Joplin, Mo., which was devastated by a storm last spring.

But Presley said the tragedy in Joplin last year may have helped save lives in her town this year.

"I think now we pay much more attention. I think people took shelter earlier. They paid attention earlier," she said. "I think that likely saved lives."

Mike Sumner, the owner of Morello's Pizza in Harrisburg, was one of the comparatively lucky ones in the badly damaged town. His friends and family all survived. Neither his home nor his business were damaged by the rampaging tornado.

"Probably about four blocks from my house is where the path of the storm went through," he said.

But Summer said he and his friends were fortunate that they survived. Most people he said, didn't have a chance to be warmed of the incoming tornado because it happened in the early morning.

"I'm sure the sirens were going off, (but) I was woken up by the tornado itself," he said. "It was just so loud. It sounded like a freight train going through my front yard."

Presley, though, said she felt like there was adequate warning from outdoor warning sirens and the media so that most people in her city knew that severe weather was on its way. Even visitors, she said, were notified.

"We rely on our hospitality professionals to make certain those people are safe," she said. "I heard over and over again yesterday that folks got that knock on the door and they were led to safety before the tornado hit."

Now, attention in both cities, indeed all the cities damaged by tornadoes, turns to rebuilding.

Presley said Joplin will serve as a model for her city. Many of Branson's residents went to Joplin to help with the clean-up and rebuilding there and will bring those lessons home.

"Those folks over there, they have rallied. They're rebuilding their schools. They have helped out," Presley said. "Now if I go over there, I see homes coming up. I see businesses that you didn't think could come alive within weeks were up and running. If they can do that, my goodness, so can we."