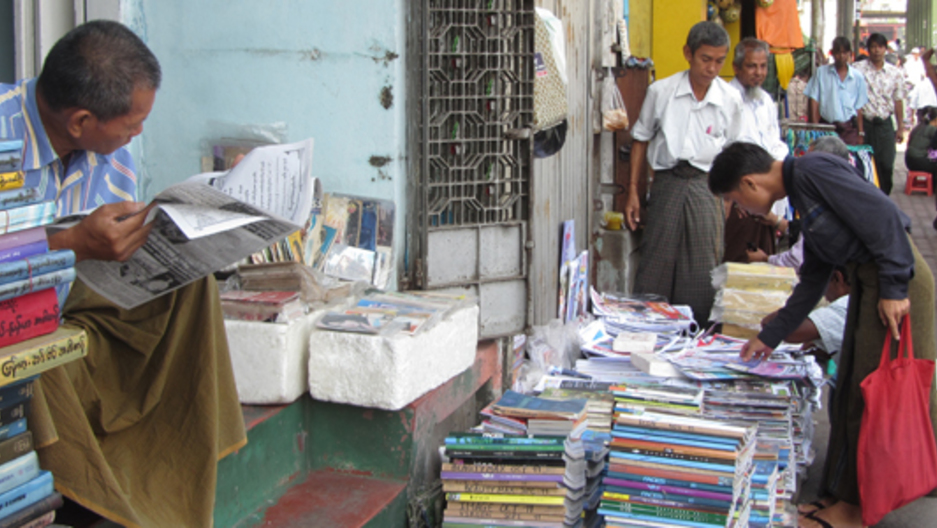 Share
It's an exciting time to be a journalist in Myanmar, formerly known as Burma. Censorship is easing, taboos on what can be covered are lifting, and the current president, Thein Sein, has even talked about the importance of the Fourth Estate as a social watchdog and a conduit between the government and the people. Quite a change from almost half a century of consistently authoritarian military rule. In the back hallways of the second floor of a down-at-the-heels Yangon hotel, there's a cramped, bare-bones newsroom. But the news and commentary that comes out of here is sharp, widely read and respected. "I'm a fan of the Voice Journal," said a young doctor named Si Thura. "Most of the issues the Journal mentions are political issues and social impact, which is different from the past." The Voice, and its companion monthly newsletter "Living Color," were among the first to try pushing the boundaries, when they started publishing about seven years ago. Ze Ya Thu, deputy editor of both publications, said things started loosening up around the 2010 elections, but have accelerated over the six months since pro-democracy opposition leader Aung San Suu Kyi–who spent all but 7 of the past 23 years under house arrest –met with President Thein Sein. "Even before the election, we wrote about Aung San Suu Kyi and put her photo on the front page, and we were banned. But a couple of months later, we could put her picture anywhere in any size. She has become the cover girl." Ze Ya Thu said there's a feeling now of wanting to write everything they can. "Of course, we have to be responsible for our content. But we want to report on everything. That is a new-found freedom, and I think that has been unheard of in our country for maybe 50 years." It was 50 years ago, on March 2, that a military coup brought Ne Win to power and started decades of repressive military rule. For much of that time, all of Burma's media were government-run – and most of the broadcast media still are. Thi Ha Saw, now 60, served as the foreign news desk editor for the government wire service. He got kicked out after supporting the 1988 pro-democracy movement. But by then, the government was starting to give licenses to privately owned publications. He joined a monthly business magazine, and is now chief editor of a political newsweekly called Open News. He said things are more open now, but censorship still exists. "You must submit your paper or at least computer print-outs to the Press Scrutiny Office. The junior officers will take a look at all these pages, including advertisements and pictures, and they scrutinize every single page. When they saw something they don't like, we were told to take it out, change it and reformat the pages." What's different now, he said, is that fewer publications need to submit to pre-publication censorship, though political magazines like his still do. He said about 10 percent of his content still gets spiked, which is better than when whole editions were scrapped. And articles now make it through that are critical of some government policies. Moreover, Thi Ha Saw said the government recently told editors it's considering a new media law that would abolish pre-publication censorship completely. That's great, he said, but there are still way too many laws on the books limiting free expression, especially in electronic and social media. He gives the example of Koko Gyi, a student leader from the 1988 pro-democracy movement, who was jailed again for participating in the 2007 pro-democracy demonstrations, and was one of hundreds of political prisoners released last month. "He got 65 years in 2007. For what? The first part was six-month imprisonment for contempt of the court. He got another five years for being within an unlawful association. So what about the rest, the 60 years? Fifteen years each for four emails. So the law is a tool to publish people they don't like." Of course, most people in Burma who send emails, or post on Facebook or Twitter, don't have this problem, nor — usually — do publications with an online presence. Still, journalists have been imprisoned for what they write. Nine were released with other political prisoners in January; three remain in prison. Reporters Without Borders last year ranked Burma 169 out of 179 countries on press freedom. But things are changing fast, according to Ze Ya Thu, deputy editor of "The Voice." "Now the line is hazier, you know? You don't know where the line is. In the past, you knew. You can't write about human rights, and you can't write about Aung San Suu Kyi. But now, you don't know," he said. "So maybe they delete some part of the news pieces. But you don't know which part they will cut out. You just cover." Now, Ze Ya Thu said, the journalists here are busier, because there's more to cover, more issues that are no longer off-limits. The challenge now, he said, is to train them up, so they better understand how to cover issues like human rights, politics, economics, and how to report rigorously, fairly and ethically. Journalism is a young profession in Myanmar, and these are early stages of what Ze Ya Tha hopes will be a new era. News media like his are now pushing, through their reportage, to try to ensure that it is.