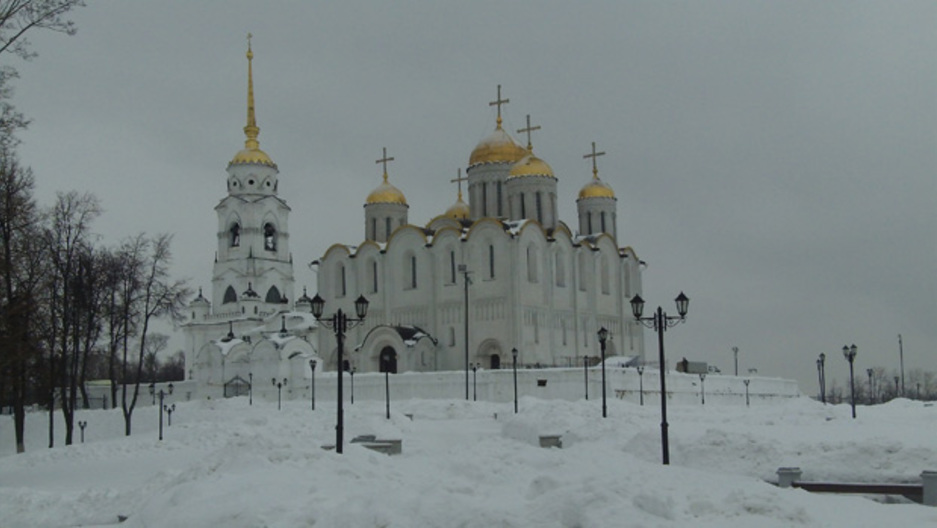 Share
All polls indicate that Vladimir Putin will win Russia's presidential election on Sunday. That's despite the wave of protests in Moscow and other cities in the country. It is outside those major centers that Putin is still able to count on support. Places like the small city of Vladimir, about a three hour drive east of Moscow. It's not named for the once and probably soon to be president Vladimir Putin. It's been around much, much longer than that, named after another Vladimir who founded it centuries ago. Inside the city's museum, tour guide Katya Arsenteva pointed to the tiny model of what was once the most important city and in fact the capital of ancient Russia. In the 12th century Vladimir was the capital of Russia. It had a Kremlin, a strongman in charge and grand churches and monasteries that still grace a citadel overlooking the town. Modern day Vladimir sits astride a busy thoroughfare leading to the east of Russia. At one time it was a thriving economic center, with several big factories employing thousands. But the city's fortunes have declined and there have been layoffs. But standing near the highway outside the museum, resident Galina is still loyal to Putin. In fact, she sounded like she's got a bit of a crush on the man — especially because of the way she said he stands up to other world leaders. "People know him, people are starting to become a little afraid of him. I think you see it, don't you? His powerful frame, his jacket ripping at the seams, you've seen it all," Galina said. "And the leaders' of other countries position… they're on the bottom, Putin's on top." If Putin is maintaining that kind of popular support here, local journalist Vladimir Ganenko thinks it's partly because he knows what matters to them. "There's very little they need. The government just increased pensions a few weeks ago, and that affects a big demographic in the Vladimir area," he said. "About a third of the population are pensioners, so these people vote a certain way. And these people think that their lives have gotten better compared to a previous very difficult period." Of course many people here and across Russia remember the shock of the 1990's economic upheaval, when some went unpaid for weeks. Particularly outside the big cities, many still associate Putin with stability and rising prosperity. That may be why there haven't been any big protests against Putin here. But a visit to a local market offered a more nuanced view of Putin's political fortunes in 2012. Pigeons shelter under the covered roof away from the chill outside as shoppers pick through the fruit and vegetables and haggle over the price. Anna Nikilayava said she'll support Putin, but she's undecided on whether his victory will be good for Russia. "Fifty-fifty. Because out of all the people in the race now, nobody else is a heavyweight who would be able to take his place and fulfill the duties, even though most of the other candidates' platforms are more acceptable to me than Putin's," Nikilayava said. It's that way with many of the people here. They all agree he'll win, and some plan to vote for him. But none seem enthusiastic about what it means for the future. And some, like one elderly woman, would prefer a return to the past. "We want Zyuganov," she said, referring to the leader of the Communist Party. Then she banged her fist on the table and said, "We need a strong hand, like in Stalin's time." Still, as in many parts of Russia, there is a generational divide — and 30-something shopkeeper Liza Khyrsanova is ready for a change, offering her own take on whether a Putin victory will benefit the country. "That depends. Who would his victory benefit?" she asked. "For us — probably not good. For the oligarchs and the rich people — probably good. I wouldn't be working in a market, I'd be a teacher in a school, if everything was fine, if the president treated me well." If there is a lesson for Putin to learn from the streets of his namesake city, it may be that even if he wins, he will enter office a more vulnerable leader. He may want to bear in mind what happened to the man who made this city great back in the 12th century. Guide Katya Arsenteva points to a bronze bust of Prince Andrei Bogolyubsky. Bogolyubsky rose to power as a strong leader, bringing good fortune to his city and himself. But over time, disillusion grew and his power fell away. He died in his bedchamber, murdered by those who once loyal to him. Putin may not suffer such palace intrigue, but this election campaign has marked a shift in his political fortunes.