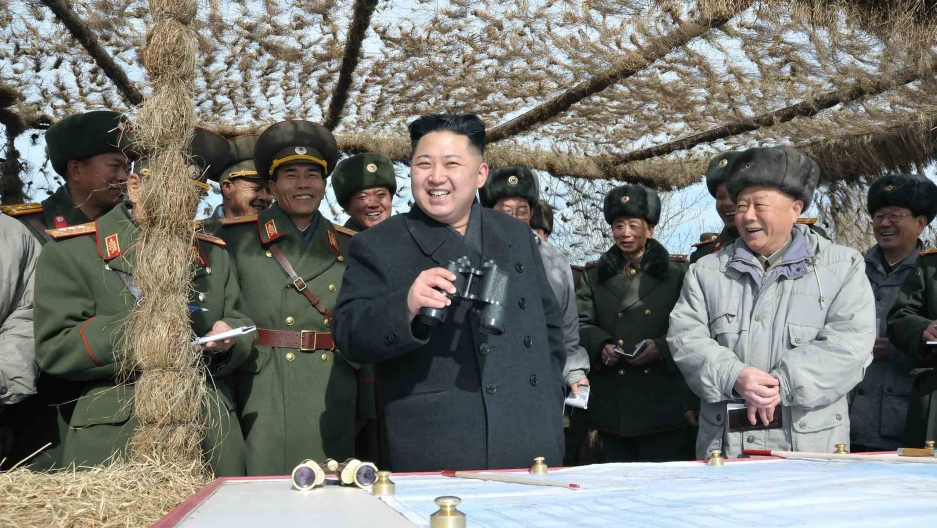 North Korean leader Kim Jong-Un, center, visits a unit of the Korean People's Army stationed in southwestern North Korea, in this undated picture released by the North's KCNA on February 26, 2012. (Photo by KCNA via Reuters.)

North Korea's new leader, Kim Jong-un is either making a break from the past or stealing a page from his father's, Kim Jong-il's, playbook.

In exchange for U.S. food aid, North Korea has agreed to suspend nuclear weapons tests and uranium enrichment and to allow international inspectors to verify and monitor activities at its main reactor, the U.S. State Department announced with North Korean state TV Wednesday morning. According to The New York Times, the "limited" compromise may mark a break in the impasse that has dogged negotiations over the North Korean nuclear program.

"Administration officials have been watching closely to see if his rise to power would alter the country’s behavior. North Korea also agreed on a moratorium on launches of long-range missiles, which have in the past raised military tensions in South Korea and Japan," The Times wrote.

In exchange for the steps by North Korea, CNN reports that the U.S. will send 240,000 metric tons of food aid to the often impoverished North Koreans. The State Department said the aid would be delivered with comprehensive monitoring to make sure it went to the right people — the Korean people and not the Korean army.

"The U.S. reaffirmed that it no longer has hostile intent toward the DPRK and that it is prepared to take steps to improve the bilateral relations in the spirit of mutual respect for sovereignty and equality," North Korea's state media reported, citing a spokesman for North Korea's Ministry of Foreign Affairs.

The apparent break-through comes just a few days after the end of U.S.-North Korea diplomatic meetings in China, where resumption of the food aid program was discussed. At the time the talks ended, though, no breakthrough was disclosed.

According to Reuters, the breakthrough could mean that the resumption of six-party talks between North Korea, South Korea, China, Japan, Russia and the United States could resume soon. The talks are aimed at ending the North's nuclear weapons program and increased ties between North and South Korea.

Relations between those two nations have deteriorated, especially since a series of North-on-South attacks in 2010.

This is not, however, the first time that the North has offered to end its nuclear program in exchange for food aid. All of its previous promises to do so, however, have been rolled back by North Korea. It remains to be seen if this time will truly be different.