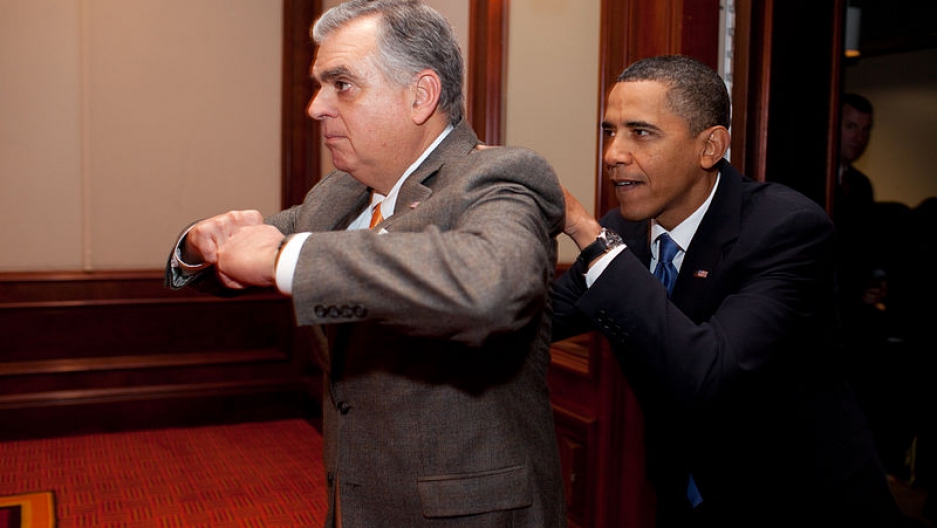 President Barack Obama, in Baltimore in 2010 to speak to the GOP House Issues Conference, was about to greet House Republican leaders backstage. Obama suggested to Transportation Secretary Ray LaHood — a Republican — that he provide blocking for him as he

There's a debate going in Congress about what will be the future of America's transportation system.

Will it mean simply maintaining the existing highway system? Expanding it as the country continues to grow? Augmenting it with national high speed rail? Funding public transit? It's becoming increasingly clear that "all of the above" is no longer a financially valid response, but just which course to take is hotly debated among Democrats and Republicans, liberals and conservatives, Congress and the White House. Now, the legislation is mired in a traffic jam to rival the worst day on the 405 in Los Angeles.

Ray LaHood, United States Secretary of Transportation, said the Senate is making progress on legislation, with a bipartisan bill being passed out of the Senate transportation committee with unanimous approval. It'll be voted on after the current recess.

So the bill was pulled and LaHood said that's sad for America.

LaHood also rejected the notion, which some Republicans have pushed, that we can no longer afford "to do it all" in terms of forms of transportation other than roads.

"We've always done big things. We've always been able to find the resources to do what we need to do in transportation," LaHood said. "I would direct people to the president's budget, which was released on Monday of this week. It's an over $460 billion budget. It's paid for using Highway Trust funds and funds that were paying for the Iraq War. And it takes care of roads and bridges in a very comprehensive way. It takes care of transit systems around America, takes care of our very strong safety agenda and safety initiative and really is a comprehensive approach."

LaHood said that should be the model for how we continue to make progress on transportation in America. The House approach, though, he said, was a failed approach.

But transportation advocates are even critical of parts of the Obama plan, saying it abandons the promise of building a true high speed rail network.

LaHood, though, rejected those criticisms, saying the $10 billion that's been spent on high-speed rail over the past three years "isn't chump change" and is "10 billion times more" that has been previously been invested in high-speed rail.

LaHood also said that transportation should be funded using the principles Obama outlined — rather than with oil and gas leases, as proposed by Republicans.