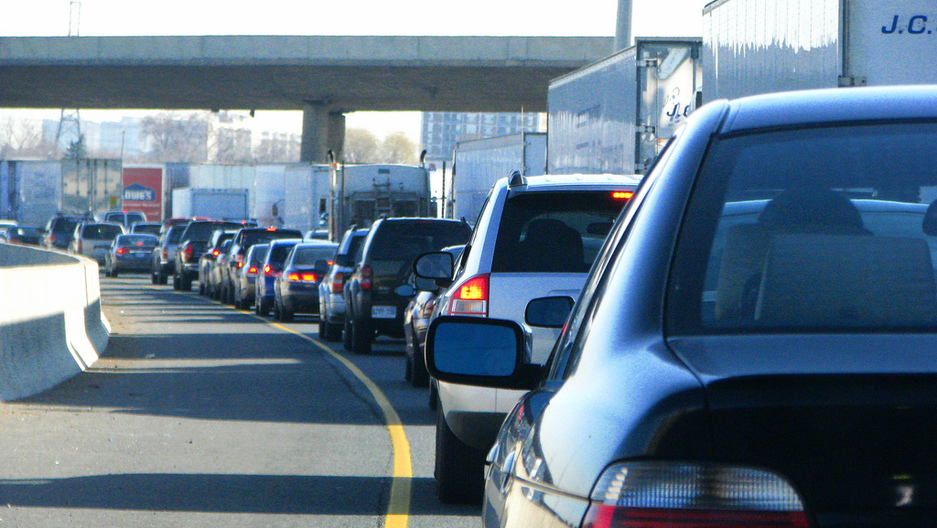 Funding for the nations' next five years of transportation bills is stuck in partisan gridlock — and there's no exit in sight. (Photo by Flickr suer MSVG, cc-by-sa.)

It creates jobs. It connects rural and urban areas. It keeps the economy moving, literally and figuratively.

But there's a vast chasm between the two different transportation bills that have been introduced in the House and Senate. Tea Party conservatives are complaining about the cost, even thought traditional GOP members want to create jobs. Some blame the lack of earmarks, which bring "pork" to certain districts, for the hold-up.

Todd Zwillich, Takeaway Washington correspondent, said historically there's been bipartisan agreement that transportation projects are good for businesses large and small, people young and old. And it helps that there are highways, bridges, railroads and interchanges in every district in the country.

The House Republican bill provides $260 billion over five years. Democrats like the size of the bill, but aren't happy with the system used to pay for the bill. The Highway Trust Fund is, at a base level, funded by an 118.4 cents per gallon tax on every gallon of gas pumped across the country. But with cars becoming more fuel efficient and Americans actually driving less, that trust fund is shrinking.

So Republicans propose to pay for the transportation infrastructure by gathering royalties off oil drilling, from taxes and fees generated by the Keystone Pipeline as well as other products that make Democrats very unhappy.

But conservative Republicans are also unhappy with the bill — unhappy with how the bill is structured and simply how much is proposed to be spent.

"That has forced Republican leaders, who have made this a major jobs billboard, to do a whole bunch of machinations — break the bill up into three big pieces, give everybody a menu, but they're all going to pass eventually," Zwillich said. "But they're not all going to pass eventually. They had to pull this back and it's not going to get done for weeks because they're trying to cobble together the votes to get a bill passed that ordinarily would have passed very easily."

Congressional leaders also say some of the philosophical discussions are being heightened this year because the prohibition on earmarks has kept members from being bought off with pet projects for their district.

"One of the consequences of banning earmarks, which is a fine policy for good government folks, is that members of Congress no longer feel like they have a direct buy-in into the fate of bills," Zwillich said. "You can call it being bought off. You can call it having projects in their districts. But people are now opposing bills on policy reasons — and not having a tunnel built in their district."