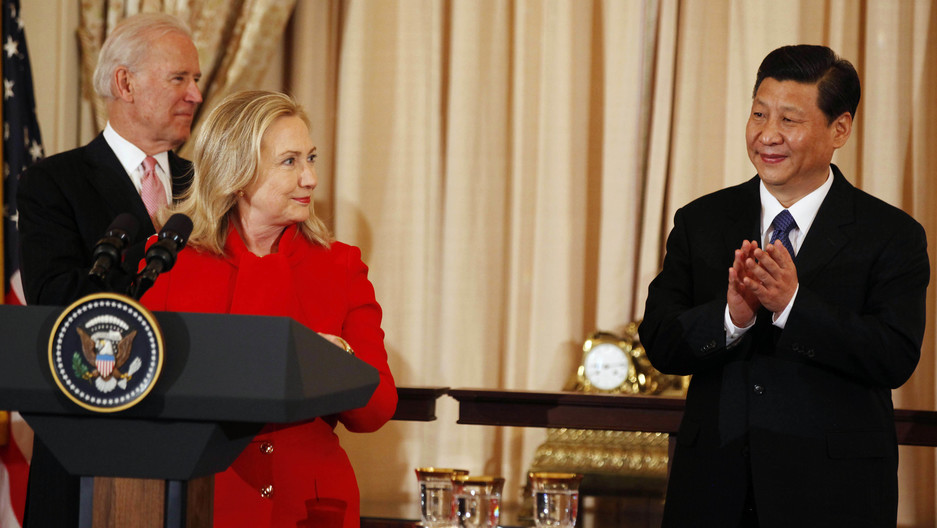 Xi is presumed to be the next top leader of the Communist country with a massive economy. His visit is a chance for him to size up America and its intentions, as well as for America to size him up. On Tuesday, he met with President Barack Obama before heading out to visit the Pentagon and other top officials, escorted by Vice President Joe Biden.

In a surprise move, during a lunch at the state department, Xi said "there's always room for improvement" on his country's record on human rights — though he lauded the progress made in the past 30 years, reported the BBC.

After leaving D.C., Biden will escort Xi to Iowa for an agricultural summit, where he'll reconnect with old agricultural contacts of his from the 1980s, including Iowa Gov. Terry Branstad who was Iowa governor when a much-less-senior Xi visited the state in 1985.

But according to The New York Times, the trip will be watched carefully domestically in China as well — where Xi isn't assured the top position despite being the prohibitive favorite.

James Fallows, a national correspondent for Atlantic Magazine who has reported on China extensively, said the Communist Party in China has a remarkably low influence in the electronic factories that are really driving the country's economic growth. But the party's trying to change that, and that will surely have an influence on Xi as he tries to rise to power.

Fallows described the party as an "organizational tool." He said he's never met a young Chinese person for whom Communist ideology holds any meaning.

"But as a career-building measure, it's something some people go into as a way to have longer-term opportunities," Fallows said.

And while larger businesses and organizations in China, including foreign-owned ones like Walmart, are often required to employ Community Party members, Fallows said he was struck by how rare it was that those Communist Party members really hewed to any sort of Communist ideology.

"That was really hard to see on the shop floors or in the offices in China," Fallows said. "It seemed to be really reporting to headquarters and organizational coordinations, as opposed to anything we'd view as old school Communist doctrine."

But the organized reporting structures may give the Chinese government a network of observers, looking for unrest on factory floors in the provinces, as well as potentially conduct industrial espionage.

"They probably preceded this latest wave of trying to get more Communist Party representation," Fallows said.

Fallows said virtually every foreign business operating in China has to figure out hot to manage or live with industrial espionage. But as for unrest, that's also a serious problem for factory owners, not just for the government.

"Especially in the southern half of China, wages have been rising so rapidly, employers are wondering whether the workers will come back after their vacations," Fallows said. "The government's concern, of course is different. There's so much dispersed popular discontent that the government needs a way to stay on top of that."

So, while the concerns are different, the strategies align.