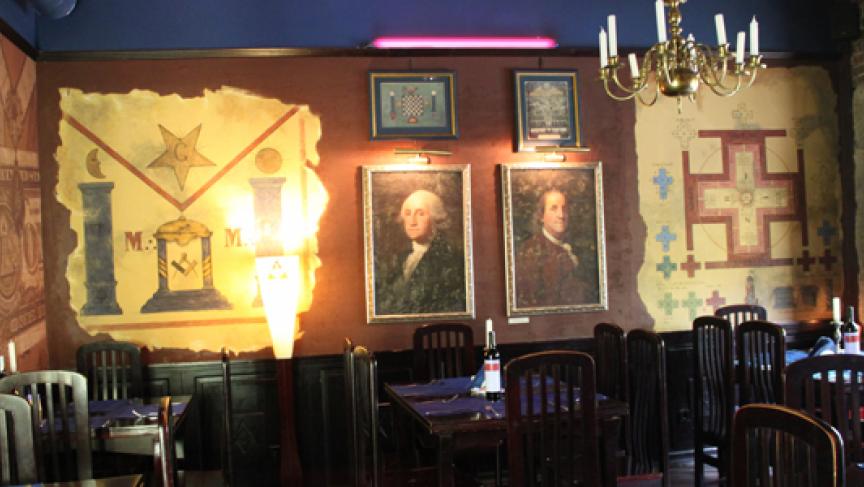 Share
The Ukrainian city of Lviv is one of the country's most picturesque towns. It's got a maze of cobblestoned streets and an Old World charm, and is getting ready to host masses of tourists for this summer's European soccer championships. The city's also got a complicated historical past. One entrepreneur has decided to showcase the hidden parts of his hometown's history — and the way he's done it has ruffled a lot of feathers. Yurko Nazaruk helped found Kryjivka, a basement bar designed to imitate the underground kryjivkas — bunkers — where the Ukrainian Insurgent Army hid while battling Soviet invaders in World War Two. To get into the bar, you have to first get pass the bouncer. He's a burly guard in fatigues who cracks open the door and asks for the password — "Glory to Ukraine". Then he hands you a shot of vodka and opens a false bookcase, leading you downstairs to the secret bunker bar. Musicians serenade diners as they munch on typical Ukrainian fare like pig ears and salty curls of pig fat. In the back there's a BB gun shooting range, where you can take your best shot at a portrait of Stalin. It's all good fun, right? "For me it was not very easy to open such a restaurant," said Nazaruk, the 29-year-old co-founder of the bar. In many parts of Ukraine, the Ukrainian guerilla fighters are remembered as Nazi collaborators who helped murder Polish citizens. But Nazaruk considers the underground fighters as heroes who defended their land from Soviet invaders. He says the black and white photos, and guerilla army memorabilia on the walls, aren't on display anywhere else in the country. "All this material you can show in a museum. But still, how many people come to museum?" Nazaruk asked. "We are trying to help people understand better their own history." One Ukrainian lawmaker has called for the basement bar to be shut down. But it's really popular with locals and tourists, and its success convinced Nazaruk to tackle other parts of Lviv's touchy past, like Lviv-born writer Leopold van Sacher Masoch, whose gave Masochism its name. Nazaruk opened Café Masoch, a kinky bistro with leather-clad waitresses. If you're willing, they'll greet you with masochistic flair — they'll chain you to the chair and whip you on your back. Nazaruk also opened a restaurant dedicated to Ukraine's Freemasons, who were driven underground during Soviet rule. The restaurant has upset some modern Masons — particularly because of its bathroom. The toilet is shaped like the throne which figures prominently in Mason rituals. Out of all of the restaurants, Nazaruk's Jewish restaurant has probably provoked the most vocal criticism —from local historians and the city's small Jewish community. At the Under the Golden Rose restaurant, diners are offered black hats with curly artificial sidelocks attached —the traditional look of an Eastern European religious Jew. "I am not Jew. But in this hat, I am a Jew," says one diner, and laughs. The menu features Jewish delicacies like gefilte fish and tsimmes — and also not-at-all-kosher pork sausage, and a cocktail named the Funny Jew. The waitress explains that one thing is missing from the menu: the prices. "It's Jewish restaurant," she says. "You eat…and after, bargain. It's Jewish tradition." Meylakh Sheykhet, a leading figure in Lviv's small Jewish community, is furious. The restaurant reinforces the negative stereotype of Jews being cheap, he said. "In none of the Jewish restaurants all over the world, you will not find anything like this," Sheykhet said. Even more appalling, he said, is that the restaurant overlooks the ruins of Lviv's once-famous Golden Rose Synagogue, which the Nazis blew up. "It is a great pain that they make the Jewish traditional life so cheap," Sheykhet said. "They exploit the Jewish feelings in favor of their business. This is a mockery." Before WWII, Jews were a third of Lviv's population. During the war, nearly all of them were sent to death camps and a nearby labor camp. After the war, the Soviets took control of the city, eventually closing down synagogues and burying whatever was left of Lviv's once-vibrant Jewish life. The same thing happened all over Ukraine. So Sheykhet decided to take matters into his own hands: he goes out nearly every day to forgotten, destroyed Jewish graveyards around the country and works to preserve them. It's the right way to honor Ukraine's Jewish past, Sheykhet says. Yurko Nazaruk insists that his restaurant also honors his city's Jewish history. "Some Jews say, 'It's not Kosher restaurant, you have no right to speak about our history, about our culture.' And I say to them, 'Yes, I have no right to discuss your history or culture, but still, I am making a restaurant about my city. And it's not only your history. It's the history of my city. And I want to show it.'" Historians in Lviv say the restaurant franchise amounts to a kitschy, irresponsible and offensive commercialization of Lviv's sensitive past. Nazaruk defends his restaurants. They teach history, he says, and without the controversial gimmicks, nobody would care to learn.