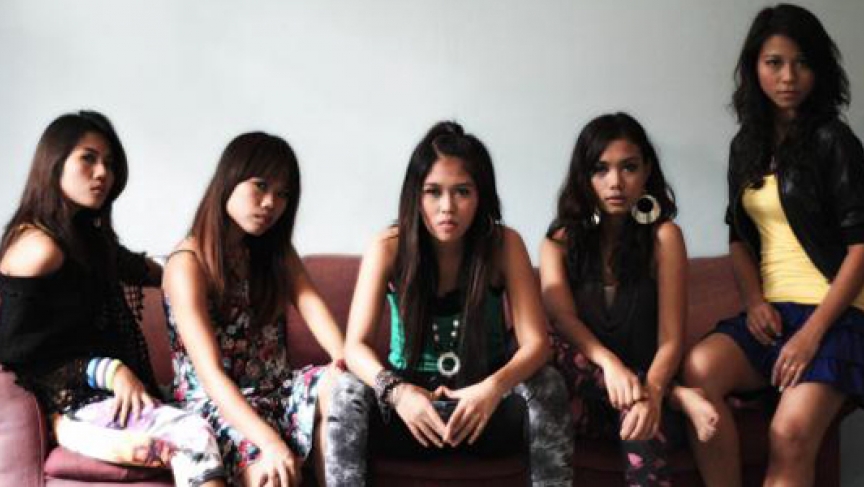 Share
Me N Ma Girls is an all-girl group from Myanmar (Burma). The girls conjure up images of the Spice Girls and other female pop singers like Britney Spears with their colorful wigs and dance tunes. The Yangon-based band is also helping to break down cultural taboos in a country where there has been censorship. The new album by the group Me N Ma Girls came out December 17th, in the midst of some significant changes in the group's native country of Myanmar, also known as Burma. On the album's title track, "Min Ga Lar Par," the band sings about being "like any other girls in the world." And there are some ways that the members of the Me N Ma Girls do indeed seem like other girls in the world: they love Britney and Shakira, they have parents who worry when they stay out late, they studied "important" things like computer science and Russian in college but dream of being pop stars. Then there are some ways that the experiences of the five members of the group seem very particular to Burma. "We are the first band who can use colorful wigs," says Htike Htike, one of the Me N Ma Girls. Burma's censorship board, which has to approve all the lyrics, music, videos, and artwork for any album produced in the country, gave them the go-ahead to use colorful wigs in a video. That was in 2011. Htike Htike says it may not seem like a big deal in the US, but the group was pretty psyched. "When we heard that news we shout and chant," she laughs. It was a pretty progressive move for the board, which had until recently blocked bands from wearing colored wigs or dying their hair, calling such things quote "against Burmese culture." The censors have been loosening their grip recently–there's even talk of abolishing the board. Heather MacLachlan, a professor at the University of Dayton in Ohio and author of a book about pop music in Burma, says the conservatism doesn't just reflect the views of stodgy apparatchiks. "It's not just the censors, I mean, those are Burmese values. Burma is still a place where, for example, dating is not really acceptable if you're a nice middle-class girl or boy," MacLachlan says. In fact Htike Htike herself–even though she's in a group that's pushing the cultural envelope in Burma—is not totally gung-ho about the idea of all censorship ending right away. "I'm a little bit worried about that, because there is no experience without censorship in teenagers. That's why, if there's no censorship, the teenagers would be mixed with the outside culture," she says. The group is the brainchild of Nikki May, an Australian dancer whose first experience in Burma was as a volunteer at orphanages there. She got it into her head to form a girl band along the lines of the Spice Girls and, two years ago, put out an ad for auditions. "It was so amazing to me that girls even turned up," May says. "You know: 'Hey, I'm an Australian singer and dancer, I want to start a girl band , who's interested?' And about 120 girls showed up to this audition!" Even in a crowd of that size, May says the five people she chose for the group stood out. "They wanted to communicate, and wanted to engage–and wanted to give it 100 percent. And the energy coming off of them was something that I really hadn't seen in many of the entertainment acts in Myanmar." The group's first live show was at the annual Water Festival in the city of Mandalay. The audience was in the thousands, and some didn't quite know what to make of the group. "One of the most pertinent moments," May remembers, "was when they were pushing their way through the crowd with police escort, because everyone was stretching out their arms trying to touch them. And one guy said, in English, 'Which country are you girls from?' And they said 'We are Myanmar! We are Myanmar.' And the guy just looked so gobsmacked." The Me N Ma Girls and Nikki May co-wrote the 12 songs on their new album. The album's title track quotes a standard Burmese greeting, and talks about balancing respect for traditional Burmese culture with the urge to be a worldly, modern woman. One song praises bling, managing to rhyme, impressively, "bracelets" with "necklaces." Another, "Kickit," is an ode to soccer. In the chorus of the song "Boung Ma Win Bua," a call of "You are a liar" gets the response "Don't open your mouth!" This song goes out to an ex-boyfriend, and is written by Ah Mon, another member of the group. She says that the song's message is a pretty simple one: "You think that you are so smart and you are good enough to play with girls. You say that you're always missing me and you're always thinking about me, but actually you're not, I know it. What you are doing to me is like a child, and I'm not a child, so I don't believe you and you are a liar." Being wary of deceit — one more way the Me N Ma Girls see themselves as just regular girls.