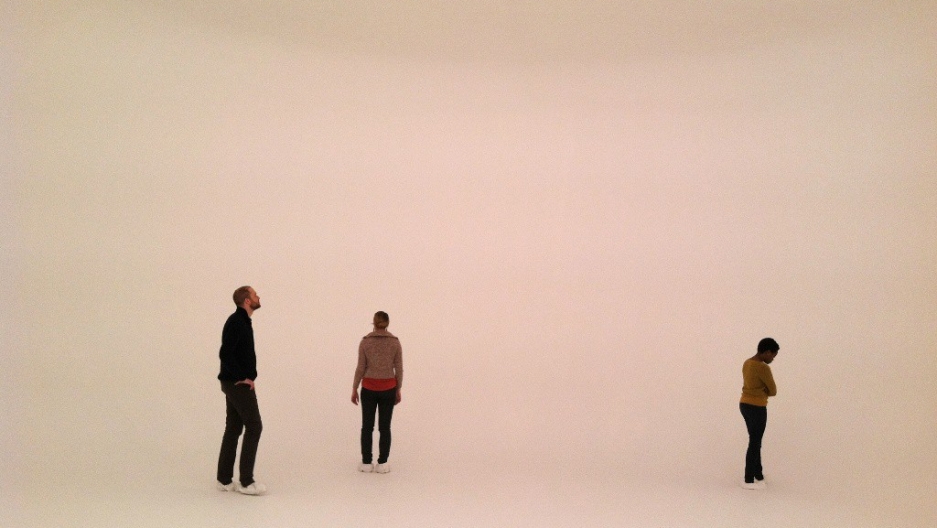 When you hear the phrase "light and space," what's the first thing that comes to mind?

Probably not a side street off West Side Highway in New York City. But this month, light and space is oddly, magically graspable at theDavid Zwirnergallery in Chelsea, New York.SA MI 75 DZ NY 12is by the 72 year-old artist Doug Wheeler. Visiting it is an experience that is near-impossible to describe without using the terms "defies comprehension" and "mind-blowing," so we figured we'd get that out of the way now.

Wheeler was a major figure of the Light and Space movement (along with Robert Irwin and James Turrell), a branch of minimalism that emerged in southern California in the 1960s and 70s. The installation at Zwirner is the first time this work has been shown in New York. According to the gallery, it cost a half-million dollars to build.

Visitors tuck their stocking-feet into white booties and enter an achingly all white room. It has no edges and, seemingly, no end. The glacial shifts of light and the imperceptibly curved walls play games with your eyes and mind. Stare at the wall long enough and a fog seems to envelope you while the rest of the world falls away.

Kurt is away this week --- so this morning seemed a perfect opportunity for the Studio 360 team to take a field trip to experience the Doug Wheeler piece. Here are some impressions from our truly-not-prone-to-hyperbole crew:

At first, I had the sense that I was inside "The Construct" --- that infinite white space inThe Matrixwhere Morpheus and Neo have their monotone / hit-you-over-the-head-existential conversations. But after standing there for a while and staring into the absolute whiteness of the space, that Hollywood-y feeling began to melt away. I felt as if I were surrounded by a dense, white, heavenly fog and that my body had begun to dissolve into the white, until I was left just with an overwhelming feeling of calmness, and of peace. ---Rebecca Douglas

I loved that I had a better experience with my glasses off than on. I can't remember the last time I went to an art exhibit that was more felt than seen. After a few minutes I felt swallowed by the seemingly endless void and the barely perceptible lighting transitions pulled me into a blissful meditative state. ---Josh Rogosin

I love the lack of depth perception when you first enter the room --- the space seems to go on forever. Also, how is it that light and light alone can create such a three-dimensional fog? This should've been the cover of the Beatles'White Album. ---Derek John

It was like stepping onto another planet or into another dimension. I've never felt so engulfed by a work of art. ---Alana Harper

Recently in New York, huge crowds piled into Carsten Hller's art funhouse at the New Museum; on this block of Chelsea, people are lined up down the block to bliss out at Doug Wheeler's strange trip of a show at David Zwirner gallery. These shows couldn't be more different in tone, Hller's raucous (with actual screaming), Wheeler's so quiet you can hear yourself breathe. But both these guys insist that, in the lives we are living now --- saturated with media to the point of nausea --- the most valuable thing you can give a person is an authentic experience. ---David Krasnow

Contemplating the void is a great way to start a Monday. ---Leital Molad

On WNYC's culture page, Carolina Mirandareviewed the Wheeler pieceand has some helpful tips for visitors.