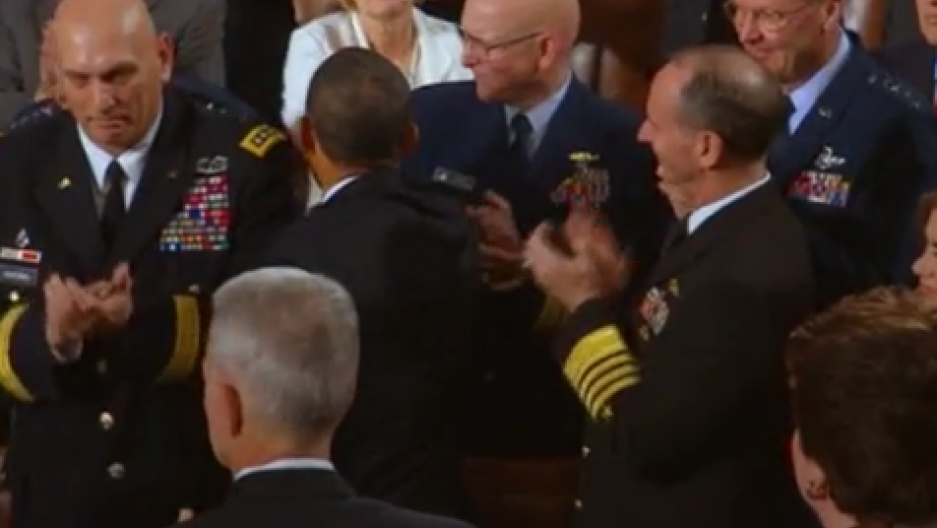 President Barack Obama shakes hands with members of the Joint Chiefs of Staff at Tuesday's State of the Union address. (Photo from AP video.)

The Pentagon on Thursday rolled out its new budget proposal, which includes nearly $500 billion in cuts over 10 years, as well as a slimmed down ground force and reoriented Air Force and Navy.

The latest proposal will actually  grow the base budget of the military over the 10 years from today $531 billion today to $567 billion, but at a slower rate than previously projected and perhaps even at a rate below inflation.

Among the proposals, limiting pay raises for troops, increasing health insurance fees for military retirees, and closing bases in the U.S. The Navy will retire some older crusiers, the Air Force lost a new, high-flying reconnaissance drone and the Army and Marine Corps will each shed tens of thousands of troops, through attrition, among other elements of the proposal.

Elisabeth Bumiller, Pentagon correspondent for The New York Times, said Pentagon officials are touting this proposal as a new way to cut the budget. First, they devised a strategy for the future, then they cut the budget with that new strategy in mind. In broad terms, the new strategy involves a reorientation toward China and the Pacific, as well as an emphasis on the flexible application of power.

"The bottom line is we're winding down the wars in Iraq and Afghanistan," Bumiller said. "The War in Iraq is over, the one in Afghanistan is beginning to wind down. There is a shift from the wars President Obama inherited from the Bush administration toward what he says is a leaner, cleaner more agile military and an emphasis on air and sea power in the Pacific."

But already politicians in Congress are lining up with their own criticisms and proposals for reshaping military spending.

Over the past decade, Congress has gone so far as to give troops raises far beyond what the Pentagon said was needed. That's one reason personnel costs have exploded.

Michigan Sen. Carl Levin, the chairman of the Senate armed forces committee said he would oppose any further American base closures until and unless there are base closures in Europe.

"The Pentagon is bringing home close to 10,000 troops and logistics supporters from Europe over the next five years," Bumiller said. "His argument is there will probably be base closings in Europe. He said go there before you come to my state."