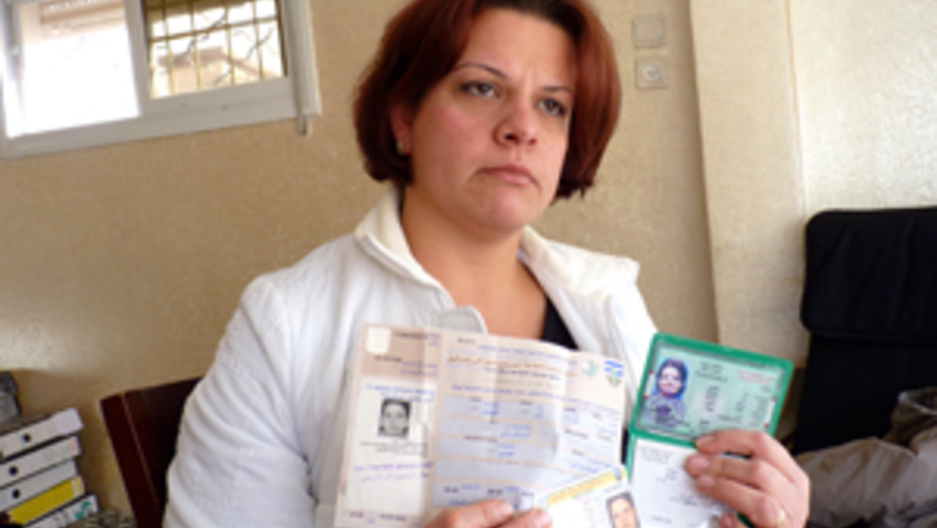 Lana Khatib is from the Palestinian town of Jenin in the West Bank. She has a Palestinian-issued ID card, an Isareli one — a temporary Israeli residency permit — but no Israeli citizenship. (Photo by Matthew Bell.)

Sitting in the couple’s living room in the Mediterranean coastal city of Akko, Lana Khatib talks about the time, almost 10 years ago, she first laid eyes on her husband, Taiseer.

Lana worked at the Palestinian Ministry of Health in Jenin, in the West Bank. Taiseer walked in looking for some research material. She still remembers being taken with the tall, handsome and well-dressed Arab-Israeli scholar who was living abroad at the time.

“I loved him, from the first sight,” Lana said with a shy giggle. “We fell in love, that’s what happened.”

Two days later, they were engaged.

Today, life is good for Lana and Taiseer in so many ways. They are married with two kids, a 4-year-old boy named Adnan and 3-year-old girl, Yosra. Taiseer is working on his doctoral thesis in anthropology and he is teaching classes. They live in a nice apartment in a nice neighborhood in Akko.

But much of that could change because of a recent Israeli Supreme Court decision. It ruled that most Palestinians — including Lana Khatib — who are married to Israelis are not eligible for Israeli citizenship.

The ruling puts Lana in danger of being deported, and Taiseer said it is no way for a democracy to treat its citizens.

“It’s not political, it’s human,” Khatib said, clearly frustrated with the new reality his family is facing. “The first victims of this will be my children, not me and not Lana. We are adults. We can survive it. Where’s the security of these two children?”

Every year for the last six years, Lana has applied for and received temporary permission to live in her husband’s hometown of Akko. But she would like to become a full-fledged Israeli citizen.

As a Palestinian from the West Bank living in Israel on a temporary residency permit, Lana is ineligible for national health insurance. She cannot get a driver’s license. She cannot work legally.

The Supreme Court decision appears to have closed the door on that possibility for Lana Khatib and for thousands of other Palestinians like her, who are married to Arab Israeli citizens. The rule applies to Palestinian women under the age of 26 and men under 36. The reason most often cited for the decision is national security. But Taiseer Khatib said he doesn’t buy it.

“You want security? I want security too. So, please go and check every case for its own,” Khatib said. “At the beginning, they said security. But it’s mainly, the reason is just simple, it’s about the Jewish state and having a pure Jewish state. This is what they want.”

"This was one of those moments when I was really grateful not to have to be among those making the decision, because it’s simply unbearable," said Israeli writer Yossi Klein Halevi of the Shalom Hartman Institute in Jerusalem.

But Halevi added that the citizenship law puts two legitimate goals on a collision course. On the one hand, there is the desire for Israel to equal equal treatment of all its citizens, including Arabs – who make up 20 percent of the population. On the other hand, there is the fundamental Zionist mission to provide a safe haven for any Jew in the world.

“There is a moral responsibility [for Israeli] political and legal decision-makers to make sure that there is a viable Jewish majority in this country,” Halevi said. “Israel is the only place in the world where Jews actually get preferential treatment and I think that based on history and based on possible future need, there is a moral imperative to preserving Israel as a place that can grant preferential treatment to Jewish refugees.”

A panel of Supreme Court judges split on the decision, six to five. Typically, the human rights community in Israel has viewed the high court as a bastion of democratic values. But Hagai El-Ad — who directs the Association for Civil Rights in Israel — said the ruling amounted to a disaster for Israeli democracy.

“This is probably the most extreme piece of racist legislation that the Knesset has passed and now, it has the seal of approval from the highest court in the land,” El-Ad said.

It is not clear how the new ruling will play out. Nor is it clear how many thousands of people would be affected. One expert on immigration issues in Israel, who asked not to be named, said government agencies have wildly different estimates of how many Palestinians are married to Arab Israelis. A statistic that is often cited, however, puts the number of Palestinians who have gained citizenship in Israel since the 1990s at more than 100,000.

As for the Khatib family, Lana said she has applied for another one-year residency permit. And she expects to get an answer from the government in the next couple of weeks.

Taiseer said they have been getting a lot of support from friends and colleagues. One Jewish Israeli family, he said, has even offered to help hide Khatib’s family from the authorities by letting them move into their home.