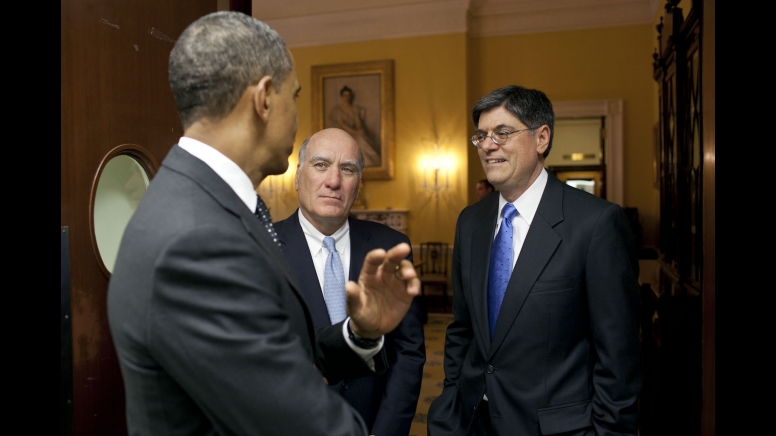 President Barack Obama talks with Chief of Staff Bill Daley and Jack Lew, Director of the Office of Management and Budget on Jan. 9, 2012,, before announcing Lew will replace Daley. (Photo by White House Photographer Pete Souza.)

William Daley, President Barack Obama's chief of staff, is stepping down to return to Chicago.

He'll be replaced by White House budget director Jacob Lew, though the transition is scheduled for the end of this month, so Lew can complete work on Obama's budget proposal for the new year and Daley can work on Obama's State of the Union address. Daley offered his resignation before Christmas and Obama initially rejected it.

After visiting with his family during the holidays, he decided to insist on resigning and Obama accepted it.

"There were a lot of people, especially on Capital Hill, who were frustrated with him," Zwillich said. "Remember, Bill Daley was on point for some really difficult discussions: debt limit, spending, government shutdown, debt reduction act. All those big things that went down on Capital Hill, most of which failed. Bill Daley was in there."

Daley was supposed to help Obama shore up support among businesses and be someone Republicans and Wall Street could approach and talk to — coming from J.P. Morgan.

While it may have helped a little with Republicans, Daley had few friends among Democrats.

Zwillich said a Democratic aide on Capital Hill told him that Lew would be much more well-received by Democrats.

"It's hard to see Jack Lew making the same misstakes his predecessor did," Zwillich said, reading from an email from the aide.