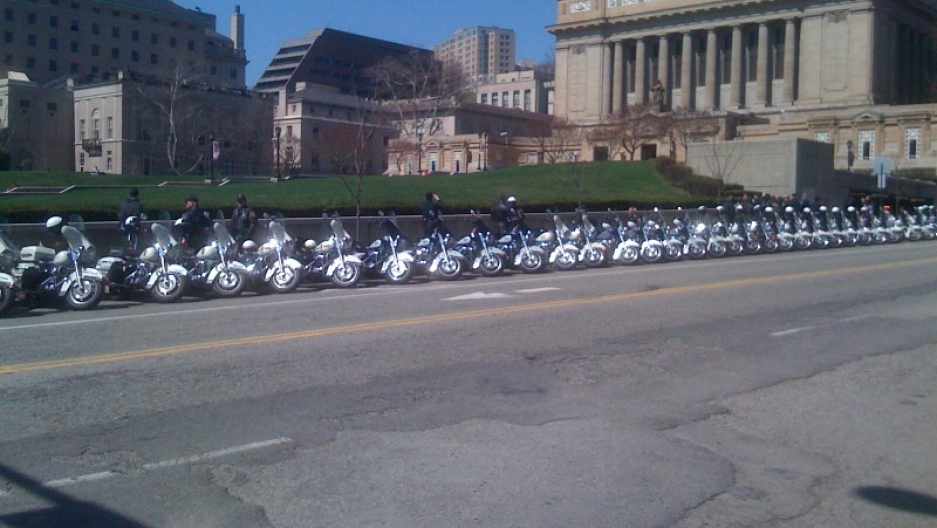 Police officers in Pittsburgh prepare for the funeral procession of three of their colleagues who were killed in the line of duty in 2009. (Photo by Chuck Werner via Wikimedia Commons.)

There are fewer police officers on patrol in the United States right now than at any time in the past 25 years.

Some 12,000 officers were laid off this year by police departments across the country. And while crime remains at historic lows, another number is skyrocketing: the number of police officers killed in the line of duty.

Bob Hennelly, senior reporter for WNYC, said police departments are eliminating groups like the warrant squad, which seemingly is an easy operation to do without. But with them not being pulled off the street proactively, police are left to encounter them in unknown situations.

"They're seeing an increase in felons using violence to avoid being brought back in," Hennelly said. "We are seeing, at least anecdotally, an increase in this kind of decision."

Hennelly said the rise of urban gangs is also contributing. There are now 1.4 million people in 33,000 gangs all across the country. They're responsible of 48 percent of this country's violent crime, he said.

"We're also seeing a flood of illegal handguns across the country," Hennelly said. "There does seem to be that proliferation going on."

Moderate politicians on both sides of the aisle, federally, have teamed up to try and combat this effort by providing $200 million to support local police departments.

All indications are that home prices are continuing to fall. Therefore, local governments, which typical derive much of their budget from property taxes, will have even less money in the next budget. That could negate the federal funding and lead to more layoffs.