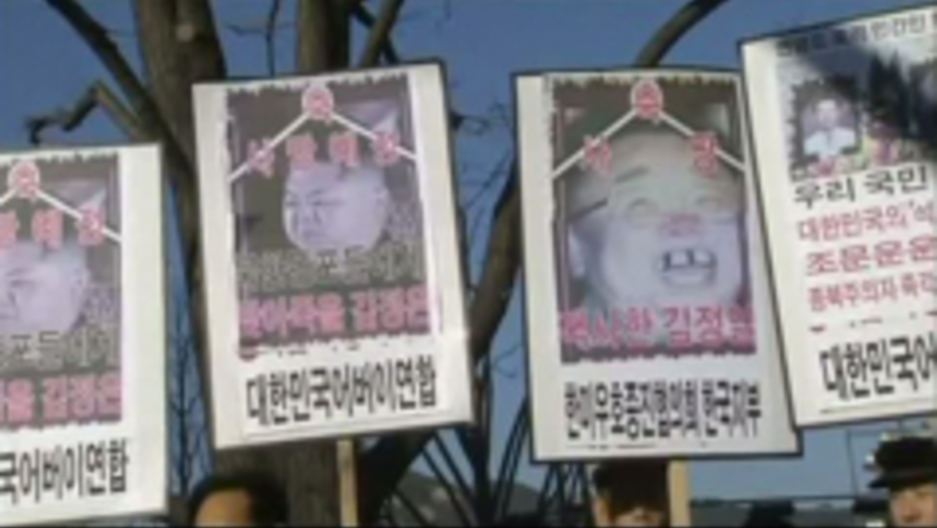 South Korean activists protest against both the hereditary succession in North Korea and those who wish to go to the North to pay respects to Kim Jong-il. (Photo: Reuters/NewsLook)

Share
The son of the late North Korean leader, Kim Jong Il was given a promotion on Monday. Kim Jong Un now heads the ruling Worker's Party's central committee, a post that helps clear the way for him to take over following his father's death from an apparent heart attack earlier this month. But little is known about the young Kim, who's believed to be in his late 20s. Uncertainty in the North often translates to uncertainty in South Korea's economy. For instance, back in 1994, after North Korea's founding ruler Kim Il Sung passed away, consumers in the South hoarded staples, fearing an outbreak of war. But that doesn't appear to be happening this time around. At the Well Being neighborhood market in Seoul, a clerk said nothing changed after news of the death of Kim Jong Il. Prices are the same and there's no shortage of goods. Whenever bad news comes out of North Korea, like when it tested a nuclear device in 2006, or when it attacked a South Korean island last year, the stock market in the South reacts. Lim Soo-ho, an analyst at the Samsung Economic Research Institute in Seoul, said South Korea's KOSPI did drop a few points after the announcement of Kim's death, but bounced back two days later. According to Lim, South Korea's economy has remained virtually unaffected because investors and consumers don't see North Korea's transition as a problem. He added that people here have experienced these types of situations before, like in 1994. They've learned from them; any bad situation has always gone back to normal. Lim said it also helps that the South Korean government isn't provoking North Korea, like it did with a military build up in 1994. Seoul's expat business community didn't flinch either, according to Tom Coyner, president of Soft Landing Consulting. He said the shock could have been greater if investors hadn't seen this one coming. "Korea seems to be a country that operates on a crisis du jour basis, so we have Kim Jong Il dying, but that's not a big unexpected event. We knew he was in poor health and the business environment is taking it in stride," Coyner said. But Coyner said that given that we still don't know a lot about the son, Kim Jong Un, investors and other business leaders will have to wait and see how things play out once he officially takes over. Still, some observers see opportunity in Kim Jong Un's rise to power. Hank Ahn, a commissioner at KOTRA, a trade and investments agency, said the younger Kim's exposure to the West during his school years in Switzerland could mean he's open to doing business with the outside world – and that's something South Korea could cash in on. "It's quite natural we can assume that North Korea will eventually open up its economy to the outside world," Ahn said. "So it's better for us, we can reduce our unification costs when the two countries are reunified, even if we don't know when. And besides, we can export our products to North Korea as well." But Kim Jong Un might have more immediate concerns on his mind. He's preparing for his father's funeral on Wednesday. So improving North Korea's economy may have to wait.