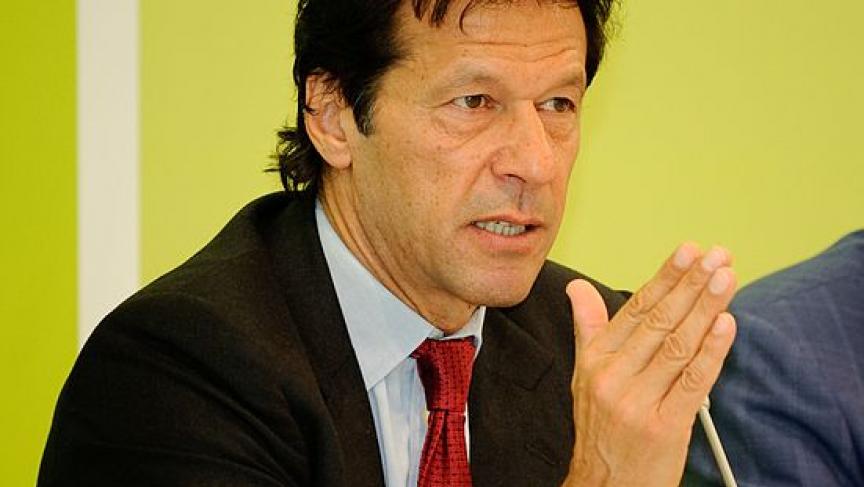 Share
Pakistani sports-hero turned politician Imran Khan held a massive rally in the city of Karachi, attracting at least a hundred thousand people according to estimates. This was his second rally in two months that's attracted such a turnout. It's a big deal, because up until recently, many observers in Pakistan considered Khan and his party to be politically irrelevant. Imran Khan made his name playing cricket, the most popular sport in Pakistan. In 1992 he became a legend after leading the Pakistani team to victory at the World Cup: He formally entered politics in 1996, founding the PTI, or "Movement for Justice," which promoted an anti-corruption platform. The PTI attracted mostly urban educated professionals, but failed to get a mainstream following. In fact, in the 2002 parliamentary elections, Imran Khan was the only candidate from his party to win a seat. But now Khan has managed to mobilize enough young urban professionals to become a rising political force. In the past, this demographic shunned politics as a dishonorable activity. But young people are coming out now out of frustration with the current leadership. "This is the first rally that I've come to! I've never supported anyone before in Pakistan," said Shazia Farooqui, who works at a shipping company. She came out to support Imran Khan at Sunday's rally. "The Pakistani want change. We believe that Imran Khan is probably the best person. He talks about respect. We're getting tired of being pointed at." Uzair Dadabhoy also came out for the rally. He's a recent university graduate, who works at an asset management company in Karachi. "You can't get justice, you can't get safety. People's businesses are getting affected. Our livelihoods get affected when the country gets in to such a terrible situation." Dadabhoy says he's been a huge fan of Imran Khan since his cricket days, but only joined his political movement a few months ago. "They might not have the best expertise to run the railways and Pakistan International Airlines, but at least they will be honest. They won't loot," Dadabhoy said, adding that anyone could do a better job of running the government than the people doing it now. At the rally, you could see posters of Imran Khan with the slogans "hope" and "change," a clear reference to Barack Obama's 2008 presidential campaign. Some people wore t-shirts with the phrase, "Yes We Khan". Despite this new found enthusiasm for Imran Khan, not everyone's so sure what he's offering. Badar Alam, editor of Pakistan's Herald magazine, said that Khan's ideology is continuously evolving, and that's not necessarily a good thing. "Whether it is right wing, centrist, or some kind of liberalism, we are never sure about his own ideology. Where is he coming from? The moment he gets his hands on to some wonderful idea, he wastes no time in adopting it," Alam said. "If you go to his party's website you will see articles which praise how Hugo Chavez has turned around the economy of Venezuela, and then you hear him speak very fondly of how China has eradicated corruption." Khan's political rivals question whether his party, the PTI, with its untested upper-class leadership, can really tackle the country's problems of poverty, violence and conflict. Nasreen Jalil, of the Muttahida Qaumi Movement or MQM, a dominant political party in Karachi, said there's no comparison between Khan's PTI and MQM. "We've been there, delivered and proved," she said. Until recently MQM was at bitter odds with Imran Khan. The rhetoric is less heated now, but the differences remain. "The problem has been that people who haven't really faced the problems, they don't realize how to tackle them," Jalil said. "It's like saying if they don't have bread let them eat cake. Imran Khan doesn't seem to have the organization and doesn't have the people at present. He might be able to develop them, only time will tell." Western governments might also be wondering what they could expect if Khan and the PTI make it in to power, particularly when it comes to cooperating on counter-terrorism. They might look to his comments following a press conference last Saturday. "If Western countries and the U.S. are looking for a friend, Pakistan will be friends," Khan said. "But if they are looking for a hired gun as it has been today, or a government that is pliant, a puppet, I'm afraid Pakistan won't be that."