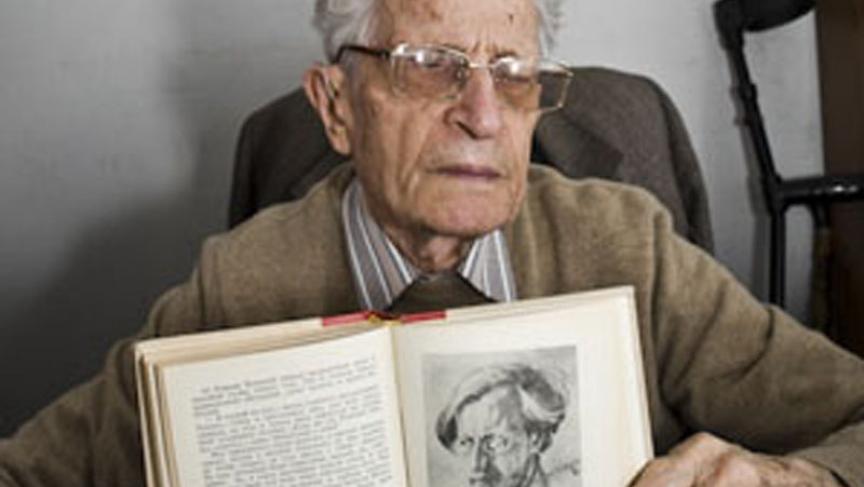 Anton Antonov-Ovseyenko, 91, survived being sent to Stalin's prison camps, the famed and feared Gulags, and now runs a museum in Moscow that looks at the history of the prison labor camps.

Story from PRI's The World. Listen to the above audio for a complete report. Vist TheWorld.org for a special report on the 20th anniversary of the collapse of the Soviet Union.

Sunday is remembrance day in Russia.

But one thing people there don’t really like to remember is the Gulag, the Soviet work camps where tens of millions died during Stalin’s reign.

Moscow’s Gulag museum is a modest reminder of a monstrous history. It chronicles the history of the millions of people who disappeared into the Soviet Union’s vast network of prisons and forced labor camps known as the Gulag.

The museum is tucked inside a courtyard off of one of Moscow’s busiest streets, right around the corner from the Cartier and Louis Vuitton boutiques. A wooden watchtower and large photographs of famous victims adorn the entrance.

The museum’s director is a 91-year-old historian and Gulag survivor named Anton Antonov-Ovseyenko. He works in a small, cluttered office on the museum’s top floor.

Antonov-Ovseyenko spent more than ten years in the camps.

“I’m kind of a living museum exhibit,” he said.

He’s got a thatch of white hair and glasses as thick as coke bottles.

“The only reason I’m here is because of my eyesight.”

Anton Antonov-Ovseyenko is legally blind, although he can see a bit out of one eye. He looks frail, but he’s feisty.

“He’s an extraordinary figure, sort of like he walked out of a crazed Russian novel," said Stephen Cohen, a professor of Russian Studies at New York University.

Cohen writes about Anton and other Gulag survivors in his book, “The Victims Return.” He first met Anton Antonov-Ovseyenko in Moscow in the l970s.

“I was particularly struck by his certainty that the camp had made him the most clever and cunning person in the world,” Cohen said.

Antonov-Ovseyenko had to be, just to stay alive.

During his 25 years of absolute power, Soviet leader Josef Stalin murdered between 10 and 20 million of his own citizens. His victims included peasants and factory workers, Bolsheviks and Baptists; poets, painters and ballerinas. Most perished in the Soviet Union’s vast network of forced labor camps.

Cohen said we’ll never know exactly how many were killed during the Stalin era.

“All we can say is that it was a kind of holocaust, it was enormous, tens of millions of people died, and disappeared and mass graves are still being discovered around the former Soviet Union today," he explained.

Stalin’s terror touched every family — in Anton Antonov-Ovseyenko’s case, his entire family. His father, a famous Bolshevik military commander who led the storming of the Winter Palace in l917, was executed in Stalin’s purges in l938. His mother committed suicide in prison. Both he and his sister were arrested and sent to the Gulag a few years later.

Anton, who was in his early twenties at the time, was accused of being a terrorist. “But if you’re blind, how can you engage in terrorism?” he says now.

So, instead of the death penalty, he was sentenced to ten years of hard labor. He’d just gotten married. While he was in the camps, his wife remarried.

“Our feelings were still the same for each other, but there wasn’t much we could do.”

Antonov-Ovseyenko said his poor eyesight is one of the reasons he survived the camps. Camp doctors tried to protect him from hard physical labor. But he still had to work. All the prisoners did.

“If we think of Nazi Germany, the Nazi ideology regarding Jews was to exterminate. The Soviet ideology was to make prisoners work,” Cohen said.

Gulag prisoners built canals and railroads, cut timber, and mined gold; no matter how cold, sick or hungry they were.

“300,000 people died in the camps in a year. They gave us tiny rations of meat and butter, but even that was often taken away by the criminals in the camp.”

Antonov-Ovseyenko said criminal gangs often terrorized the other prisoners. But the criminals and thieves liked him, because he would recite poems and tell them stories.

“And I was expected to do this after a while. So I always enjoyed this special status. But of course thieves are thieves. They can still steal from you even if they like your stories.”

He had other skills that protected him: he had a strong voice, and could act and sing, so camp commanders let him perform in Gulag theater productions. He said once he played a secret policeman. He even sang in a Gulag operetta.

That was a lot more fun than the time camp commanders made him voice one of Stalin’s speeches over the radio.

“They basically took me at gun point from the camp to the radio station and back. I had to read the words of the person who was my enemy, and I was an enemy of the state!”

Antonov-Ovseyenko finally became a free man after Stalin died in l953. His successor, Soviet leader Nikita Khrushchev, shut down most of the camps by the mid l950s.

The great Russian poet Anna Akhmatova wrote at the time: “Now those who were arrested will return, and two Russias will be eyeball to eyeball: The one that put people in the camps and the one put there.”

One day, Antonov-Ovseyenko bumped into the informer who put him in the camps. He could barely contain his rage.

“I said 'What about that hearing when you accused me and lied about me? What did you think I was doing?' And he became very shy and said ‘Let’s not talk about the past.’ ”

This fellow, like many others who made false accusations, ended up in the Gulag, too.

“They did what they had to do, so let’s not accuse them. They thought it would protect them," Antonov-Ovseyeno said.

He also thinks many of these people honestly believed the Soviet Union was overrun by spies and saboteurs.

Twenty years after the demise of the Soviet Union, Russian historians are debating not just what happened, but why so many people were sent to the Gulag.

“It became a kind of second, slave workforce run by the political police, and the regime came to think of it as essential," Cohen said.

Antonov-Ovseyenko said Gulag prisoners built much of the Soviet infrastructure and helped Stalin transform the USSR into a military superpower.

“A lot of the major construction projects, plants and factories, and transport arteries, were built by prisoners. Nearly 200,000 prisoners worked on the Moscow-Volga canal, according to official records. That’s twice as many as worked on the Egyptian pyramids," he said. "So it was a major economic machine. Stalin didn’t care how many suffered or died.”

“The seven Stalinist buildings that look like wedding cakes, which include the foreign ministry and Moscow State university, were built for the most part by Gulag slave labor,” he said.

There’s a less visible, psychological legacy of the Gulag, too.

Roman Romanov is the 29-year-old deputy director of the Gulag museum.

“This wasn’t that long ago. On a subconscious level, it’s still in our heads; we carry it with us,” Romanov said.

The Gulag museum doesn’t get many visitors. One reason, Romanov said, is that many Russians don’t know their own history. His mother’s entire family was deported during the Stalin era, their village burnt to the ground.

“Only now, since I’ve started working here, has my mother started opening up," Romanov said. "But when I was growing up, not a word was mentioned, nobody talked about it.”

Cohen thinks Antonov-Ovseyenko is a kind of hero.

“The fact is that almost everything he’s done in his life since he got out of the Gulag has been virtuous. And his final heroic act is the creation in Moscow of the first ever state museum of the history of the Gulag. There is no other in Russia.”