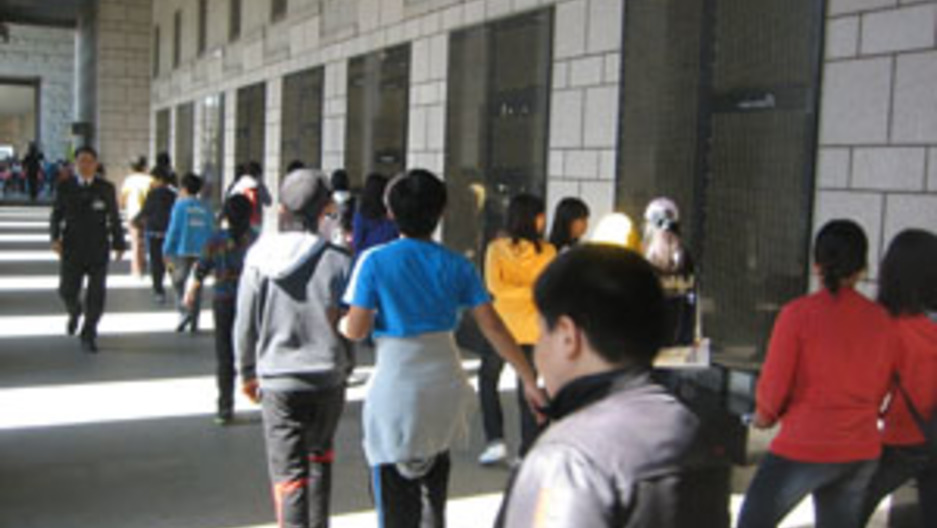 Share
US and North Korean envoys met Tuesday for a second day of talks in Geneva. Washington is urging Pyongyang to give in to some pre-conditions, such as halting uranium enrichment activities, before multinational denuclearization negotiations can resume. Officials in South Korea say that ending the North's nuclear weapons program is a pre-condition itself if the two nations are ever to reunify. Yet for many Koreans, especially those born long after the Korean War, reunification is one of the last things on their mind. The government wants to get young people more interested, so it's recently launched an online television channel all about unification. The Unification Channel features press briefings, interviews with policy makers and news reports, all related to reunifying with the North. It's also running a 20-episode sitcom about a South Korean family living close to the DMZ who adopts a North Korean refugee. Some of the episodes end with a pop quiz about unification related issues. The Unification Ministry has launched Twitter and Facebook accounts to attract young Koreans to the website. Lee Sung Shin, from the ministry's PR team, said it's not easy to get kids in high school and college interested in North Korea. South Korean life is very competitive, he said, and young Koreans are busy with school or searching for jobs. "They don't have time to think about unification." But it goes beyond busy schedules, according to Andrei Lankov, an analyst at Seoul's Gookmin University. After nearly 70 years of division, many Korean youths just don't see the point anymore. "Pretty much nobody among the younger generation of Koreans is seriously interested in unification and North Korea," Lankov said. "North Korea is increasingly seen as a distant country, an irrelevant place, a poor dictatorship whose population happens to speak the same language." That's unfortunate, he said, because this generation needs to be prepared for the day when the North Korean regime ceases to exist. "Unification will come, and not as a result of negotiations between the two governments, but as a result of a revolution in North Korea," Lankov said. "The current generation will deal with the consequences of this change." Lankov said those consequences include picking up the bill for reunification, which some think tanks put at more than $100 billion. The economic impact of unifying the peninsula was the main concern of students I met in a class at Seoul Women's University. At Seoul Women's University, some students raised concerns about those economic impacts. 21-year-old Lindsey said she doesn't know how the South Korean government can afford to help lift North Korea out of poverty. "Everyone people in North Korea, almost everyone, is poor," Lindsey said, adding that South Korean already has to help its own poor. Lindsey and several other students brought up their government's proposal to create a so-called unification tax that would set money aside for integrating the two economies. The unification channel should explain how that money would be used, said Hwa Seung Hyun, who is 24. "I think that is really good idea, because we have to know about North Korea before we [sic] unificate," she said. "Government should teach us why we have to unificate before they get our tax." Hwa isn't so sure she'll actually log in to watch the Unification channel. But her classmate, 21-year old Mirae, said she'll check it out. "I'm interested because I study history and I think unification is most important in Korea. I think it's the duty of our generation." Mirae said she'll try to persuade her friends to watch the channel, which is probably just what the South Korean government wants to hear. The North doesn't seem too pleased about it, though. North Korea's own official media called the channel psychological warfare and declared it an act of aggression aimed at preventing reunification.