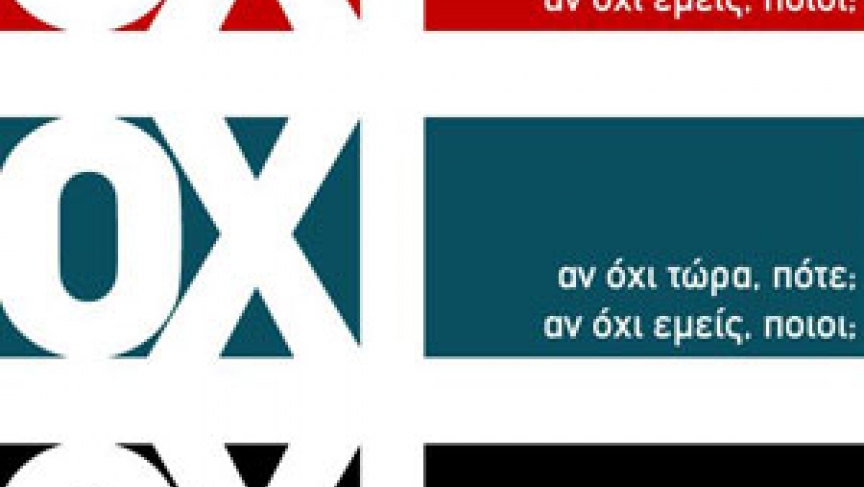 The Greeks have launched the Oxi campaign, to say no to budget cuts and corruption in Greece.

Story from PRI's The World.

Protests have been filling Athens’s Syntagma Square on and off for months now. But last Sunday night, they spilled over into a soccer match between two Greek teams.

During the match, some fans displayed a large banner that said, “Corrupt politicians, you will drown under the anger of the uprising.”

Officials stopped the game, and asked fans to take the banner down. The fans refused, though, eventually, the game resumed.

Afterward, the fans displayed the banner on their vehicle. They were reportedly stopped by riot police, and four people were arrested.

That incident has infuriated many Greeks.

“Public feeling right now is being banned. There is some kind of total censorship,” said Nina, who only wanted to reveal her first name.

Nina used to be a member of the ruling socialist party, but she quit last year after the government agreed to austerity measures dictated by European officials. Greece is struggling to avoid default on its mounting debt, and it needs to make deep cuts in order to qualify for European bailouts.

But at no point, according to Nina, were the Greek people asked to approve these measures.

“We feel like we’re entitled to give our opinion on the policies,” she said. “People have to have an opinion on the matters that will impact their lives for the next 20 years.”

Another woman, who only wanted to be identified as Sofia, said the message of the banner at the soccer game is resonating. People have had enough.

“Let me give you a joke that’s popular now, and you’ll see exactly what I mean,” Sofia said. “After the arrests, someone said that Greece is the only country that you go in jail for saying someone is corrupted, rather than being corrupted.”

Sofia, Nina and a few others have now started a non-partisan movement called “OXI,” which is Greek for “No.”

They’re using Facebook and Twitter to rally suport. They're hoping Greeks will hang banners on their balconies this week with a simple message — NO.

It has historical overtones.

This Friday is “OXI” day, a national holiday that commemorates when the Greeks said “No” to Mussolini’s request to let Italian troops enter Greece at the beginning of World War II.

But this “NO” is directed inward, at a political system seen as flawed and, above all, corrupt.

“Probably we are focused on the wrong enemy. The enemy is not the crisis; it’s the corruption,” said Costas Bakouris, chairman of the group, Transparency International, in Greece.

He said bribery and tax evasion are endemic in Greece, and people have been turning a blind eye to it for decades.

“One of the problems in Greece is that we are a society that is the most tolerant of corruption,” he said. “I mean, we have a guy caught stealing and they say, oh, he’s got three kids, he’s not going to do it again. We tend to forgive and tolerate things other societies will not tolerate.”

The OXI campaign wants first and foremost to say “NO” to the decades of corruption. Sofia, the OXI organizer, said they see the “NO” banners as a kind of people’s referendum.

“‘No’ is just the first step,” Sofia said. “Then we have to find what else unites us besides saying no to the bad habits — what is the Yes we want for our future. So it’s a two-step process, and we’re working on it.”

Not bad, the organizers say, for only being up and running for such a short period of time.