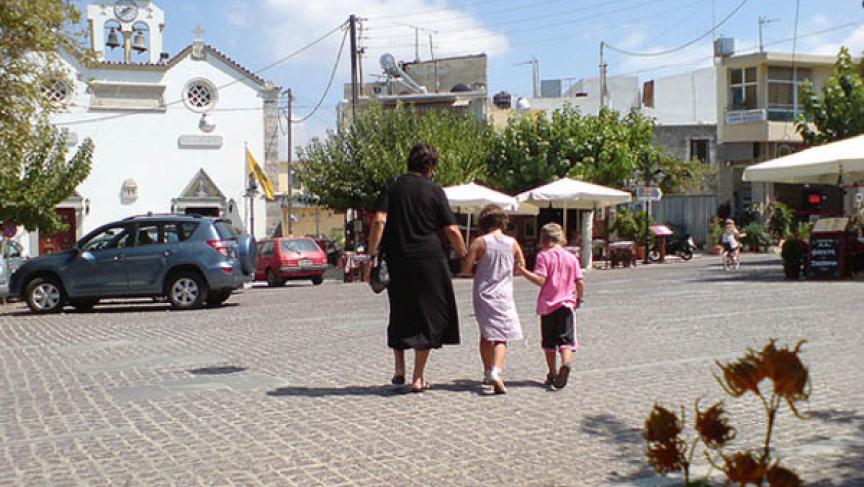 Share
People living in Greece are getting used to strikes. (Some Greek listeners and readers note that we should have just said: In Greece, strikes are part of everyday life). On Thursday, public transport workers in Athens began a 48-hour strike. Workers at archaeological sites are also on strike. Taxi drivers are set to walk out on Friday. It's all in protest of the government's moves to slash wages and raise taxes in a bid to secure more bailout money from the European Union. The wage cuts and tax hikes are putting an immense strain on many Greek families. The World's Clark Boyd reports from Magoula, a small town just outside of Athens. At a local activity center, kids are learning a fundamental rule: Look to the right, look to the left, and then look to the right again before you cross the street. Teacher Anastasia Lazarou asks them if they should ever cross without looking. "No" is the answer of the kids. Lazarou trained as a nurse and as a photographer but she couldn't find work. She saw this job listed at a local unemployment center, and thought she'd try it. Given the state of things in Greece right now, I ask her if she's just happy to be working at all. "No, I don't feel happy," says Lazarou. "I feel safe — for the kind of times we are living in that's enough." I ask her how she's paying her bills. "You mean how I'm NOT paying my bills?" Lazarou jokes. "My cell phone company just called to remind me I haven't paid them." The other teacher here is Lazarou's husband, Yorgos Mandas. When they started a little more than a year ago, each made close to $1,200 a month. Now, Mandas says, they're earning about $850 a piece. "It's not enough to live, because all things are expensive," says Mandas. "Things get more expensive everyday." Mandas and Lazarou say they've cut entertainment from their budget. No more drinks and meals out with friends. Mandas says he might even try to give up his $7-a-day cigarette habit. Gas prices keep rising, they tell me, and they had a long commute. So, they've moved in with Lazarou's mother, since her house is much closer to work. Lazarou shows me around the house. Her brother and his fiancée are also living here — and so are two chickens. Lazarou's mother, Meletia Adam, sells some of the eggs and eats the rest. Not so much because of the economy, she tells me, but because she likes fresh food. In fact, Adam says she's sick of the media's constant doom and gloom portrayals. "Greece's financial problems don't concern me," Adam says. "I'm not going to discuss it." Still, just in case "this little thing called a crisis" — as she calls it — grows bigger, she's urging her kids to farm a plot of land she owns outside of town. Adam's ex-husband, has caught the cultivation bug as well. Petros Lazarou worked for more than 30 years as a machinist in a cement factory. He's now retired on a pension and like many, he's seen that pension slashed in recent months. "You understand," Lazarou says, "I need to help my family as much as I can, as much as I can endure. This summer, I grew cucumbers, tomatoes and peppers in my courtyard. I didn't buy anything from the market." Lazarou says the economic crisis is putting a huge strain on families. "It used to be that when you had a problem, you went to a friend or relative," he says. "You asked for a loan, and you paid them back. Now, who are you going to ask? Everyone's going through the crisis." "The main deficit now concerns hope," says Yanis Varoufakis, an economist at the University of Athens. He says that the Greek family traditionally centered on three generations: grandparents, parents, and grandchildren. That unit, he says, functioned in lieu of a welfare state, pooling resources, helping those members need. But, Varoufakis says, this crisis is undoing those bonds. "We have a social implosion, as a result of the fact that all three generations have lost their jobs, have their pensions, and lost their income. And they're finding it difficult, almost impossible, to support one another." Back at the Magoula activity center, Yorgos Mandas and Anastasia Lazarou say goodbye to the kids. They say they want kids of their own and they've decided to start trying, even though times are bad. But they also say that they might move to Australia, where Mandas' brother lives. If they do go, Mandas tells me, it will only be with half a heart. The other part, he says, will always remain here.