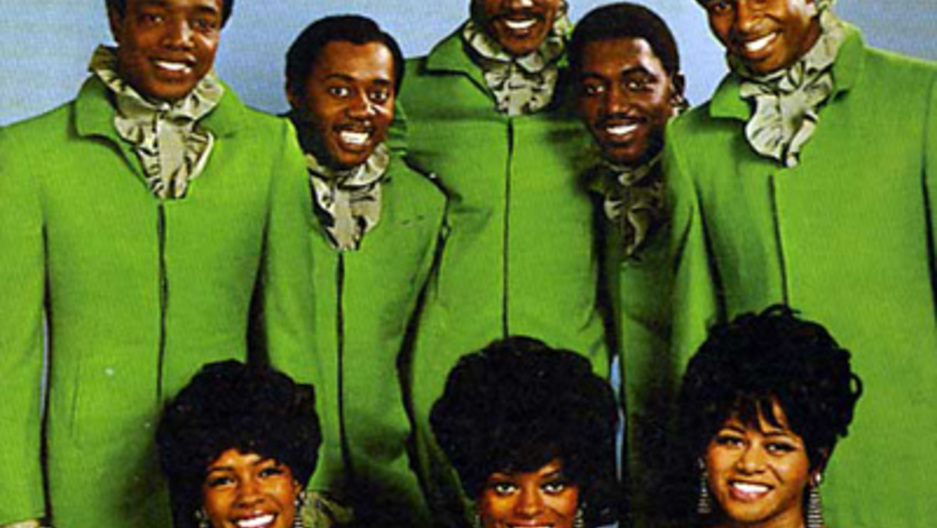 Back cover from the collaborative soundtrack to the Motown TV series TCB, starring the Supremes and the Temptations (Photo courtesy of flick user shellworks)

Story by Here and Now. Listen to audio for full report.

These are just a few of the attributes that made Diana Ross & the Supremes and The Temptations some of the biggest stars to come out of Motown Records. This year, Motown marks the 50th anniversary of these two groups, celebrating their talent and success in the music business.

The Supremes and The Temptations went through a lot of changes before they became the historic pop stars they are today. Long before these groups released their seminal hits like "Stop! In the Name of Love" and "Ain't to Proud to Beg," they were known to the Detroit music scene as the Primes and the Primettes.

"Those were their original names," said Renee Graham, pop culture critic for Here and Now. "The Primes were The Temptations, and their manager wanted a sister group and that sister group was known as the Primettes."

Although the groups shared many similarities, their differences ultimately determined the groups' longevity.

"To me the Supremes were always a pop group. And that was very much by design," Graham said. Founder of Motown Records Berry Gordy, Jr., wanted the Supremes to be feminine pop starlets--which is why Diana Ross was picked as the group's frontwoman rather than the bluesier Florence Ballard.

"The Temptations, on the other hand were always a soul group," Graham said. "There were whoops, there were hollers. There was a lot of church in their music. They were allowed to be as gritty and hard and all those things you associate with great soul music."

With a more relatable sound and without a clear leader like the Supremes had, the Temptations were able to have more variety in their music.

"Berry Gordy once made the comment that with the Temptations, you essentially had five men who could all be lead singers," Graham said "And it automatically gave them a more versatile sound." During the political turmoil of the late 1960s, the Temptations connected more closely to their audience by touching on social issues in songs like "Papa Was a Rollin' Stone."

"The Supremes pretty much stuck to singing love songs," Graham said. After Ross left the group in 1969, the Supremes' popularity remained steady until with a few hits until the group disbanded seven years later.

Regardless, no one can deny that the music of both The Supremes and The Temptations has stood the test of time.