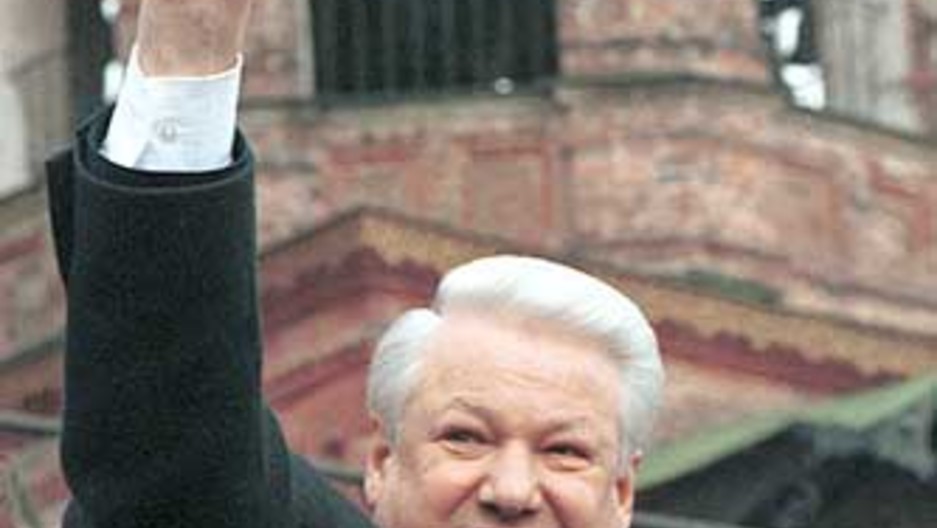 Boris Yeltsin speaking at a meeting of his supporters in 1993 (Photo: Creative Commons)

Share
Twenty years ago, the Soviet Union broke apart. There many different theories as to why that happened. But many Russians say the USSR was killed off by a power struggle at the top. Valery Solovei has spent the past two decades pondering what happened to his country. "It was a very interesting time for me as a historian, because it was like the decline of the Roman Empire," said Solovei, a soft-spoken professor at Moscow State Institute for International Relations. "I was an observer, and even sometimes a participant in those events." Even so, like most former Soviets, Solovei was stunned by the sudden dissolution of the USSR. Solovei said Soviet leader Mikhail Gorbachev's policies set the stage for the country's collapse. By trying to reform the ailing communist system, Gorbachev unleashed forces that ultimately destroyed it. But the abrupt way it ended? According to Solovei and other Russian analysts, Boris Yeltsin, Gorbachev's chief rival, was responsible for that. In Solovei's view, Yeltsin was driven by more than just anti-communist fervor. "I think that the personal factor played a very important role," he said. "Because Boris Yeltsin hated Gorbachev." Yet Yeltsin would not have risen to a position of power were it not for Gorbachev. The two had started out as allies. Gorbachev brought Yeltsin, a regional Communist party boss, to Moscow in l987 to promote his political reforms. "Gorbachev wanted to introduce somebody dynamic, and profit from Yeltsin's personal dynamism," said Andrei Grachev, Gorbachev's press secretary and advisor at the time. For a while, he did. Yeltsin was charismatic, fearless, and outspoken in condemning Communist party perks and privileges. But then, Yeltsin attacked Gorbachev in a speech to the party's Central Committee. Grachev said even though Yeltsin didn't criticize his boss directly, he crossed a line. "In Russian and Soviet tradition, anybody who would challenge him would be a dead man politically at least," Grachev said. Valery Solovei said Gorbachev and some of his advisors told him to send Yeltsin to be ambassador in Africa or Latin America, "where shortly he would become a drunk. But Gorbachev said no, it's impossible because now we live in another society, we must be human." It's a decision, according to Solovei, that Gorbachev still regrets. "He told me he made a mistake in his assessment of Boris Yeltsin." Gorbachev forced Yeltsin to recant, but only demoted him. Yeltsin then took advantage of Gorbachev's democratic reforms to stage a political comeback. In l991, Yeltsin ran for president of the Russian Republic, becoming the first popularly elected leader in Russian history. Real power still rested with Gorbachev and the Communist Party. But the attempted coup by Communist hardliners in August l991 changed everything. Yeltsin's bravery in facing down the coup leaders transformed him into a national leader. Gorbachev, meanwhile, emerged from the coup not only fatally weakened, but dependent on Yeltsin. Masha Lipman of Carnegie Endowment in Moscow said Yeltsin wasted no time seizing the initiative. "Gorbachev was rescued by Yeltsin's people, brought back to Moscow in a plane, rushed to where Yeltsin was holding his victorious press conference," Lipman said. "Yeltsin made him, on air, sign a decree banning the Communist Party. Gorbachev was totally confused. He said we didn't have any such agreement. He looked totally lost and confused." Ruslan Khasbulatov, the former speaker of the Russian Parliament, worked alongside Yeltsin in the summer and fall of l991. "After we crushed the coup, Yeltsin behaved very underhandedly in relation to Gorbachev," Khasbulatov said. "He isolated Gorbachev, and constantly exerted pressure on him. Then he basically finished him off." The final act came on December 8, l991. Yeltsin met secretly with leaders of Ukraine and Belarus and together they agreed to dissolve the Soviet Union. In its place would be a voluntary union, the Commonwealth of Independent States When Gorbachev heard what they'd done, he said "They've begun carving this country like a pie." With the Russian Republic comprising 3/4ths of the Soviet Union's territory, Yeltsin got the biggest piece. Boris Yeltsin later wrote in his memoirs, "I never intended to fight with Gorbachev personally. But why hide it? The motivations for many of my actions were embedded in our conflict." Andrei Grachev thinks without Yeltsin's actions, the USSR could have remained intact, at least a while longer. "Because Russia took the lead in challenging the union state," Grachev said. "Russia declared its independence from the USSR, of which it was actually the bulk and the dominant force. The only explanation for this surreal situation was precisely this personal confrontation between Yeltsin and Gorbachev." But Yeltsin also had some help. Boris Kapustin of Yale University said many opportunistic members of the Communist bureaucracy abandoned Gorbachev once it looked like the Soviet state might not survive. "I believe it was just this shift of some power elites from Gorbachev to Yeltsin which proved to be decisive for the outcome of their struggles," Kapustin said. Mikhail Gorbachev resigned as president of the Soviet Union on December 25, l991, handing the suitcase with the nuclear codes to President Boris Yeltsin of Russia. By the end of the year, the USSR was no more. Historian Valery Solovei said it's nothing short of a miracle that the Soviet empire expired relatively peacefully, without massive bloodshed. For this he credits Gorbachev. But he also views the last leader of the Soviet Union as a tragic figure. "He wanted better," Solovei said. "Now people in Russia hate him. Very often I think he looks like King Lear from Shakespeare, who lost his kingdom. And Gorbachev lost his kingdom too."