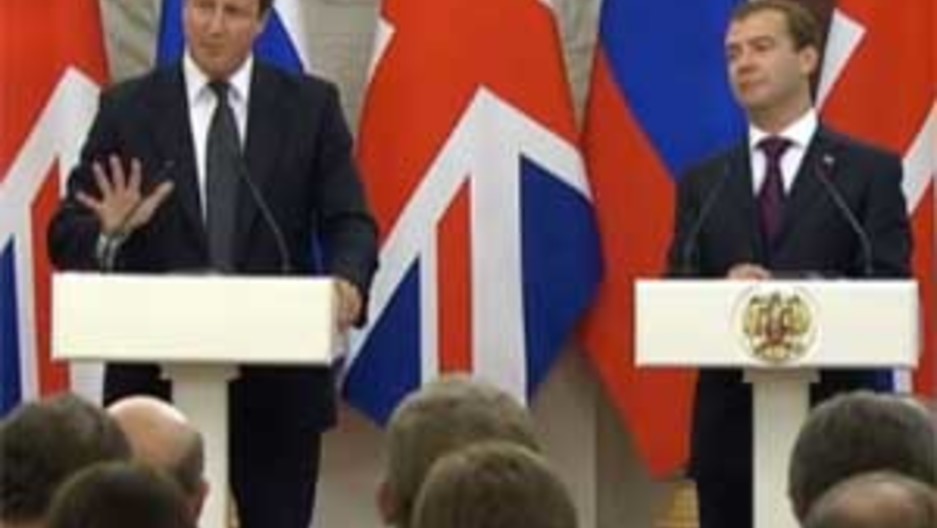 Share
British Prime Minister David Cameron flew to Russia Monday on his first visit to the Kremlin. This trip even more significant for another reason. It marks the first time in more than four years that Russian Prime Minister Vladimir Putin has spoken to anyone in the British government. The two countries have had troubled relations since 2006. That's when a former KGB spy was assassinated in London. But some Americans are claiming the British shouldn't be so quick to repair ties with Moscow. The long, excruciating death of Alexander Litvinenko from radioactive poisoning still casts a shadow over UK Russia relations. Britain has long demanded the extradition of a prime suspect. The Kremlin has refused. Litvinenko's widow, Marina says she still wants justice. "I think it is very important, it is important not even (just) for me, it's important for the two countries, for Russia and England because before this case is sorted out we will not have a normal progress of the relationship between these countries," Cameron said in a message Monday. Visa restrictions against some Russian officials after Litvinenko's murder remain in place as does a refusal to work with Russian security services. But Cameron also brought an entourage of business people with him, and he seemed ready to move forward. "So we face a choice – we can settle for the status quo, where in too many areas we're in danger of working against each other, and therefore both losing out, or we can take another path – to cooperate and therefore both win," Cameron said. Still, there are many — American politicians and business leaders alike who are urging Cameron to get even tougher with the Russians. And they're focused on one case in particular. Bill Browder was once one of the biggest foreign investors in Russia. In 2006, he was blacklisted by the Russian government. "I complained about corruption," Browder said. "They expelled me from the country, they raided my offices, they expropriated my investment companies, (and) stole $230 million of taxes that we paid. A young lawyer named Sergei Magnitsky stood in the way and tried to stop this whole corruption scheme. He was arrested, tortured for one year and killed at the age of 37. It's a terrible, terrible place to do business. Magnitsky did die in 2009 in a pre-trial detention center from a heart attack after being accused of tax fraud. Earlier this year, Secretary of State Hillary Clinton introduced a US travel ban and froze the assets of 60 Russian officials implicated in Magnitsky's death. Other politicians on Capitol Hill are wondering why the British government isn't applying more pressure, since Magnitsky worked for a firm based in the UK Monday, after meeting with Cameron, Russian president Dmitry Medvedev seemed to suggest corruption was an unfortunate part of doing business — everywhere. "Maybe I am revealing a secret to you, which you probably do not know, but (corruption exists) in Britain, too," Medvedev said in a statement. "Nevertheless, we are trading with Britain and ready to invest in the British economy. This does not mean that we should not combat corruption." Sir Rodric Braithwaite, former British ambassador in Moscow, is skeptical about efforts by both the Americans and the British to pressure Russian leaders. "The question is – what effect will it have on the Russian system to express these views," Braithwaite said. "I'm all in favor of change – it's desirable for us and of course it's even more desirable for the Russian people. The question is how is it going to come about? I don't think foreigners lecturing the Russian leadership is going to make it come about any quicker." That seemed clear later Monday after Cameron finally had his formal meeting with Prime Minster Putin. Putin did not speak publicly of corruption or human rights. Instead, he highlighted the fact that British business has become the top foreign investor in the Russian economy — to the tune of nearly $41 billion.