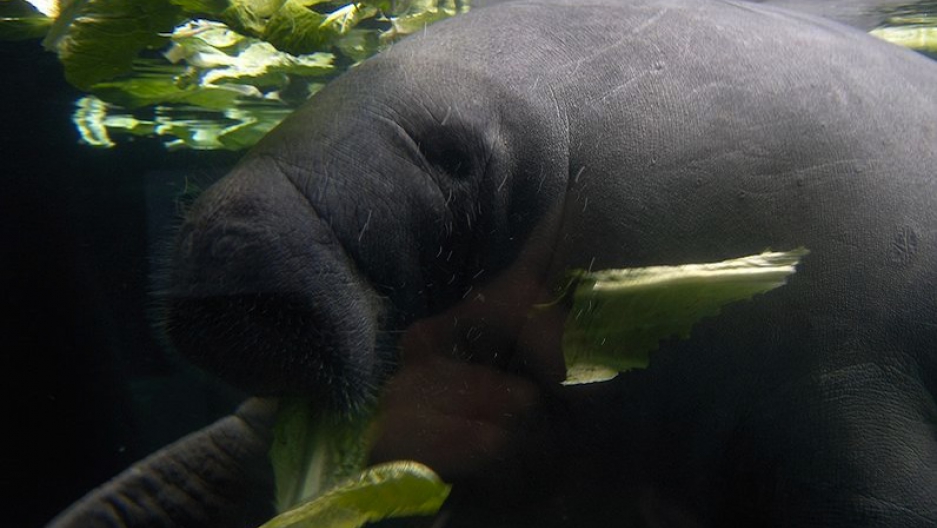 Photo of a manatee (Image by Wikimedia user Chris Muenzer)

"The past two winters have been very hard on manatees," according to Ron Mezich, a Biological Scientist at the Florida Fish and Wildlife Conservation Commission. Cold waters have killed at least 400 of these endangered mammals. Some, however, have found that power plants are a source of the warm water that they need to survive.

Engineers use water to cool off power plants, and that water is then re-circulated into ponds and streams, often at high temperatures. "Typically Florida's spring systems average around 72 degrees, but Manatees aren't fooled," Mezich told PRI's Here and Now. "When the power plant offers them 80 degree discharged water they oftentimes prefer that."

This relationship has been building for decades. Mezich says, "Over the years, the power plants have learned to deal with them." He adds, "in some cases, it's an attraction for the local community to see large numbers of manatees." (Above: manatees gather at a pond. Photo courtesy of Pat Quinn.)

The manatees have learned to live with the power plants, too. Mezich says, "Power plants have probably helped manatees over the last 30-40 years by reducing losses to cold stress."

In the long term, though, that relationship could become a problem. "These power plants won't always be there," Mezich points out, "and sometimes they have mechanical difficulties and we lose them, and that is a very big concern."

"We're looking in the future for ways to wean the animals off these sites," Mezich told Here and Now. They're running microcosm experiments to see how best to move the animals away from the power plants and allow them to live on their own.