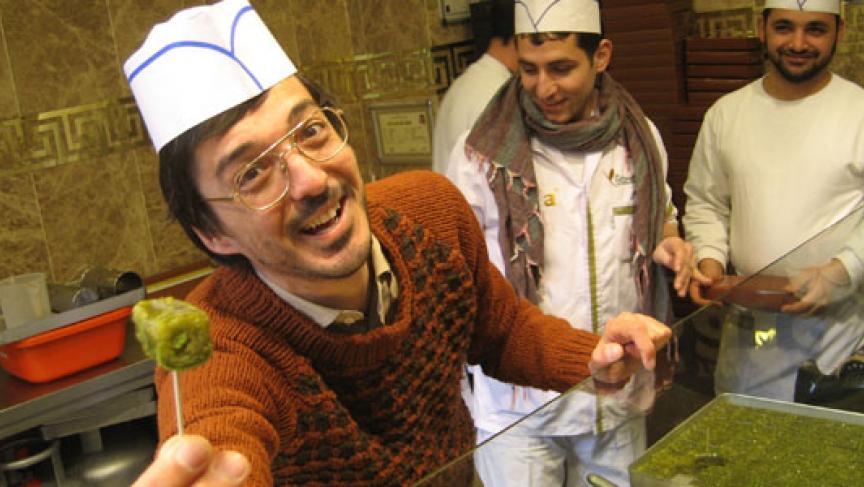 Share
For the Geo Quiz we are looking for an ancient empire, which stretched from Algiers to Baghdad and Budapest. Today, the city, which was the capital of this empire, has a culinary reputation and roasted lamb sandwich is one local specialty. It comes with grilled hot peppers and tomatoes and a generous pinch of fresh oregano, which makes it nice and spicy. The Ottoman Empire is the answer to the Geo Quiz and Istanbul is where The World's Matthew Brunwasser took a walking tour of Turkey's favorite foods. By Matthew Brunwasser It's 9 a.m. outside the spice bazaar in the Old City of Istanbul. Istanbuleast guide Angelis Nannos is waiting for his tourists Adrian Van Allen and Julie Cheng from Oakland, Calif. Nannos is a Greek who fell in love with Istanbul six years ago and has lived here off and on ever since. Nannos tells us we're going to experience Turkish food where it lives, not by sitting in a restaurant. The six-hour tour will include roughly three-hours of walking and three hours of eating. "Let's make our breakfast together, like buying stuff," Nannos said. The open market has huge bins with dozens of types of olives and cheeses, spicy red pepper pastes, pickles, nuts and meats. One of the most important elements of Istanbul street food is the omnipresent simit. It's like a sesame bagel, but baked and not boiled. "It's something that you grab before you go to your job, or it's a snack," Nannos said. "It's something very Turkish and you buy them most of the time from people with pushcarts around the city." Nannos is skilled at retooling the tour for squeamish or adventurous eaters. He points out one special Turkish cheese you probably won't find in your local supermarket: tulum. "Tulum, lets see, it gets aged in the skin of a goat," Nannos said. "It takes this very strong taste, it's a kind of a Conan the Barbarian kind of a cheese." Van Allen says part of the reason she came to Istanbul is her love of Turkish food, which reflects its history as an enormous multi-cultural empire. "It's an interesting synthesis of all the different areas around it," tourist Adrian Van Allen said. "It's no one thing; it's actually a combination of lots of different things. It has the Middle East food, along with some of the Mediterranean. In one plate you can have something that looks like lamb ravioli and humus right next to it. Nannos takes us to find something to eat. We have breakfast at a simple table in the entryway of an ancient building filled with workshops. Then we stop off for a pide, otherwise known as Turkish pizza, originally from the Caucasus Mountains or the Black Sea region. Back on the street, Nannos says he wants to show us something. He leads us down an alley and shows us kokorec. It looks like a long greasy football on a stick, spitting grease on the coals. It's fat and sweetbreads wrapped up like a mummy, but instead of bandages, it's wrapped up with lamb intestines. The kokorec maker cuts off a section, adds tomatoes, peppers and oregano, and chops it up for a sandwich. When Turkey began negotiations for joining the European Union in 2005, one of Turk's major fears was that EU food laws might ban kokorec. "They didn't make demonstration for the political things, but they went out on the streets for kokorec," Nannos said. "They made this pop song with so smart dressed people, singing for kokorec if you can believe it. Kokorec its looks like something bizarre, it's something very Turkish, and before to leave you should try kokorec. I'm not sure if you'd like it or not." "It tastes kind of like chopped sausage, but with a bit more of the offal taste," tourist Julie Cheng said. "Awful taste??" asked Nannos. "No, O-F-F-A-L," Cheng said. Cheng might be a more adventurous eater than most American tourists in Istanbul. "There's a little bit of a bacony taste to it too," Cheng said. "Do you ever put lemon on this?" The tour takes us to a candy shop which makes its own hard candies, an old-fashioned soda fountain-type place for boza, a fermented millet drink, and of course, a doner kebab stand. After five hours of walking and eating, we make our first stop in a restaurant. "We are so lucky that we still in 2011 we can still find in Istanbul all this diversity of food that it comes from the Ottoman times," Nannos said. The specialty of the place is boneless smoked lamb, slow roasted on a chain above hot coals. But by the end of the tour, it's tough for the tour goers to eat any more. "Most of the time I see half closed eyes and a huge belly, telling me no more, no more and thanks very much, but please don't feed me any more, I mean, now I just need a bed to take a nap, and that makes us happy," Nannos said. Istanbul is an increasingly trendy destination for tourists from around the world. And while it's cool to be a foodie these days as well, the Turks have been serious about their food since long before today's foodie trend began.