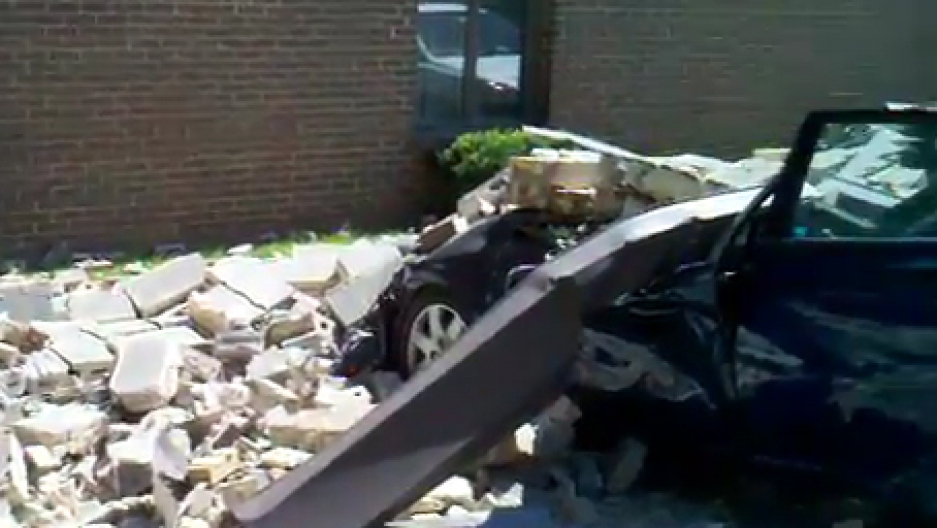 In Washington, DC, parts of the Pentagon, the White House and the Capitol were evacuated as a 5.9 magnitude earthquake hit northwest of Richmond, Virginia.

President Obama is currently away from DC on Martha's Vineyard, in Massachusetts.


Tim Craig, a reporter for the Washington Post, was in the middle of an interview when the quake hit.

"All of a sudden, the whole building started shaking," Craig said. "And people first looked alarm, then they grew scared. I think a lot of people thought it was a bomb."

Just north of Baltimore, Margaret Sullivan said her whole house started shaking. "Everything started shaking on top of the refrigerator, the stove, everything -- we got scared!"

According to the Associated Press, officials say the quake was far enough inland that it didn't trigger a tsunami along the East Coast.

Here's what some of the folks on the East Coast had to report on PRI's Facebook page:

Sally Maier: Drinking with evacuated World Bankers and Corcoran employees at the Exchange saloon, one block from the White House!

Lisa S. Park-Gehrke: In Shepherdstown, WV, we got a low rumble. My husband and I were at Rite Aid and the pharmacy clerk said it felt like someone ran into the building with a vehicle. We joked about it being an earthquake - soon to find out that it was an earthquake! Haha

David Hollis: In Hamilton, NY and felt it; swaying motion for about 2 minutes; very unsteady under foot. At first thought I was not feeling well, then saw calendar on wall swaying.

Sasha Scott: In Richmond, was in my building and it felt like being above the subway at rush hour at Penn Station. Thought maybe some explosion was impending so I rushed out of the building... promptly learned that this is the wrong thing to do during earthquakes. As if any of us out here know this. Nothing about this old building in our lovely, historic neighborhood feels like the kind of place anyone would want to be in an earthquake.

Bruce Golightly: Pittsburgh, PA and a report from Toronto, Ontario

Heather Young: My friend in Boston felt it, too.

Ashley Laree: ‎...and everywhere else in DC. We enjoyed time in the shade on the grass, got tired of waiting, and walked home. Glad I live in DC and I'm not stuck in this traffic.

Debbie Eliason: Felt it on the beach in Chincoteague Va

Christine Hope: Baldwinsville, NY (Village NW of Syracuse): Definitely felt 2 rocking movements. Having lived 27 years in Humboldt Co., CA, I knew what I felt was an earthquake. I looked for verification in the house, and the crystals on my chandelier were swaying inches.