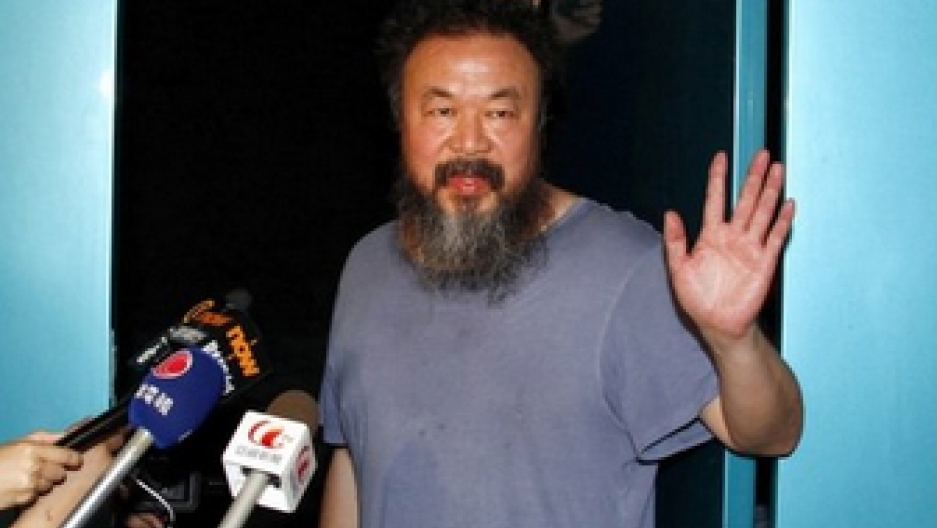 Share
It was a thinner and more subdued Ai Weiwei who came home Wednesday night, and had uncharacteristically little to say to a crowd of waiting journalists. "I'm out, he said. "I'm happy. I cannot give any interviews. Sorry." Chinese Foreign Ministry Spokesman Hong Lei said Thursday that Ai Weiwei is out on bail, meaning he can't leave the area where he lives, and has other restrictions. Lei said Ai Weiwei has been investigated for economic crimes, that he evaded taxes, and destroyed relevant documents. He said Ai Weiwei was being allowed out on bail because he'd admitted to his crimes, promised to pay the back tax, showed a good attitude and had a chronic health condition. Hong Lei declined to answer a question about whether Ai Weiwei's bail conditions allow him to create and exhibit art, or keep up what had been his near-constant Twitter-feed. Joshua Rosenzweig is with the DuiHua Foundation, which works for the release of political prisoners in China. He says the economic charges against Ai Weiwei seemed an afterthought: "It seems they detained him first, and came up with justifications later," Rosenzweig said. "Which has led a lot of people to think the tax charge was not the reason they detained him in the first place. It was to take him out of the picture, to make this vocal critic of China silent for a period of time." He's not the only one being silenced. Amnesty International says more than 130 Chinese civil rights activists have been detained this year, in the wake of government concern that the pro-democracy movements in the Middle East and North Africa might give Chinese ideas. "Ai Weiwei's release on bail can be seen as a tokenistic gesture to deflect mounting international criticism," said Catherine Baber, Amnesty's Asia-Pacific deputy director. "And it's really vital that the international outcry focus on those other people who remain in secret detention in China today." One other prominent dissident who's due to get out this weekend is AIDS activist Hu Jia who got three years in prison for co-writing an open letter critical of the Chinese government, in the run-up to the 2008 Beijing Olympics. Joshua Rosenzweig of the Dui Hua Foundation says Hu Jia, like Ai Weiwei, will not be a free man even once he's released. "Hu Jia, as part of his sentence, like many political prisoners, was given deprivation of rights for one year, which would mean he can't vote, he can't run for office, he can't publish anything," Rosenzweig said. "Those are some of the conditions. And he'll have to check in with police at regular intervals." He may also be under effective house arrest, as he and his wife were even before this prison sentence. His wife, Zeng Jinyan, was briefly detained last weekend. When I reached her by phone Thursday, she said she couldn't give an interview to journalists and wasn't sure what would happen Sunday, when Hu Jia is scheduled to be released. "I hope it'll go smoothly," Hu Jia said. "But I don't know." News of most of these detentions is kept from the Chinese public. But Law School Vice President He Bing at the Chinese University of Politics and Law commented on all the drummed-up Red fervor ahead of the Communist Party's 90th anniversary next week. "This is an absurd era," he said. "It encourages you to sing revolutionary songs, but discourages revolution. It encourages you to go see the movie about the founding of the Party, but discourages you from setting up a party." The crowd's reaction suggests many in the audience found it absurd, too. A video of He Bing's comments made the rounds online for a day. Then it was removed, by most websites — for having inappropriate content.