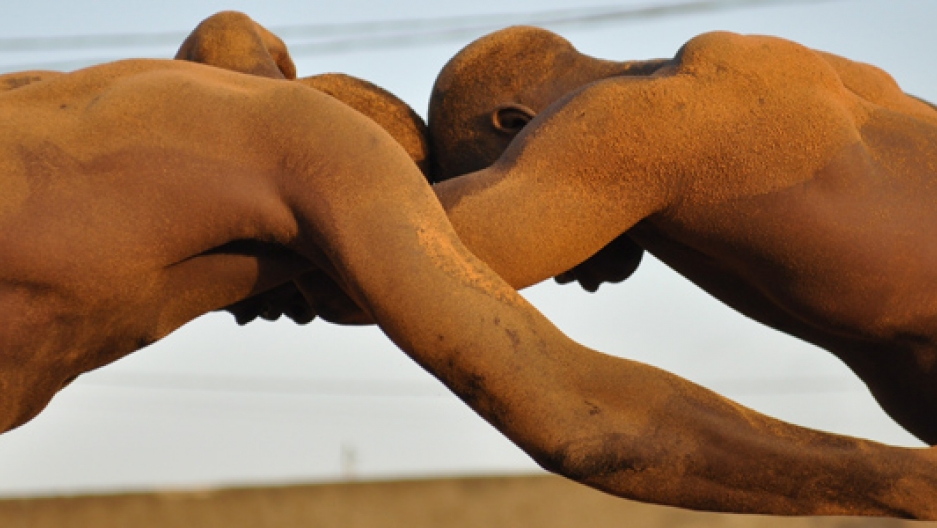 Share
Wrestling has been practiced in Africa for centuries. In sub-Saharan Africa, it has long been a popular sport in rural areas. But in Senegal today, wrestling has become the national obsession. Senegal's wrestlers, though, are allowed to fight each other with their bare fists. It's one of the only countries in the world where that is legal. Professional wrestlers are superstars in Senegal, pulling in fees of hundreds of thousands of dollars for a single fight. And for many poor young men, wrestling offers the only chance to earn a good living. In the dying sun of a Dakar afternoon, two hundred young hopefuls, dressed in cotton shorts stand punching at the air. There is just a single trainer. Many of the boys can not read or write. Either they left school at an early age, or they simply did not have the chance of getting an education. It may not look like much, but this wrestling school, in the heart of one of the city's poorest suburbs is training some of the country's highest-paid sportsmen. The school's top wrestler, Balla Gaye Deux, will earn 75 million francs in his next fight, around $160,000. In a country where the average annual income is just over a thousand dollars, and around half the population is unemployed, wrestling has become a way out of poverty and unemployment for thousands of young Senegalese men. Mor Seck, 23, is a professional wrestler. For him, wrestling is a serious job. "I became a wrestler to support my family. We train all day long, from 6 in the morning until 6 at night. I get up at 5.30 in the morning, get ready, then at 6 o'clock I am at the beach to train. At 10 I go to the gym, then at 5pm we come here to the school to practise wrestling. Really, it's very hard," Seck said. "I've given my whole life to wrestling, I don't know anything else. I've concentrated my whole life, all my energy, to become a champion. My dream is to be a champion, one day." Wrestling is big business in Senegal. Unlike in much of Africa, soccer fails to pull in the crowds here. So, thousands of fans flock to the stadiums on the weekends to cheer on their favourite wrestlers. Sponsors like Orange, the French telecom company, pour money into the game to get their brands seen on national and international TV. Thierno Ka is from the National Wrestling Board. "Yes, it is the number one sport these days in terms of audience, but in terms of money invested in it, the government does not help us," he said. "We have no subsidy, we are finding ways out of sponsorship but we don't have money from the government. We don't have a national arena, we are squatting football pitches and people are starting complaining, moaning, and saying this is not a place for wrestling. But if we don't organise it in those football places, we will never have any place to do it." The majority of professional wrestlers leave school or their low-paid jobs as carpenters and metal-workers to enter training. Before they start to win their fights, they have to rely on their families to support them. The hard work and discipline needed to keep going is fuelled only by one thing: the dream of making it to the top, and that one day they will be able to support their families in return. But it's not just hard work which makes a successful wrestler. There is also the "marabout." "To be a wrestler, first of all you need a weapon, so that you're protected," said one-time Olympic boxing champion Balla Gaye. "The marabout gives you that, it's a weapon for us Africans." Gaye is now the head of this wrestling school. He has a number of Islamic spiritual doctors — or marabouts — that he consults to ensure his wrestlers' success. They give the wrestlers special potions to drink and bathe in before the fights; heals them when they're injured, and gives them talismans containing Koranic scripts to protect them from their opponent's own marabout's powers. "Even if you train hard, you'll go and see a marabout as well," Gaye said. "It's the marabout who makes a wrestler a champion. Whether it's the marabouts, the money, or the superstar status, bare-fist wrestling has overtaken football as Senegal's most popular sport. Senegalese men and women are proud to support an African game, and they love a performance. When the matches are underway, the two fighters paw each other patiently, waiting for a moment to strike. Once they have their opponent in a headlock, the fighters punch each other in the face, hoping to weaken their adversary before throwing him to the ground. All around, dancers dressed in traditional clothes and sabar drummers bang out a deafening beat. The atmosphere is electric.