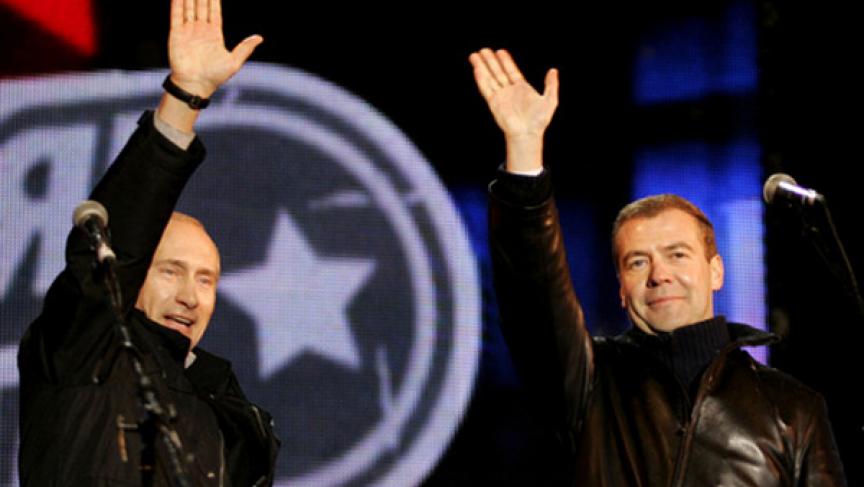 Share
An appeals court in Moscow Tuesday upheld the conviction of the man who was once Russia's richest person. Mikhail Khodorkovsky used to own the energy giant, Yukos. Then, he ran afoul of Vladimir Putin and served eight years in jail for money laundering and embezzlement. Tuesday, Khodorkovsky learned he'll serve five more. The ruling might reinforce Putin's tough-guy image. That'd be fine with the Prime Minister. But it might also be fine with Dmitry Medvedev. He's been Putin's political partner for years. But the two are starting to brand themselves as political opposites as next year's presidential elections draw near. Andrei Zolotov, editor of Russia's Profile magazine, said the political posturing is an interesting thing for modern-day Russia. "What's absolutely clear is that in the last couple of months both President Medvedev and Prime Minister Vladimir Putin have distinguished themselves from one another," Zolotov said. "There is posturing going on with statements from Libya to statements on car factories." Not too long ago, Putin attempted to test-drive a new Lada Granta in Togliatti, Russia's equivalent of Detroit's motor city. In front eager camera crews Putin looked under the hood, kicked the tires, and touted the car's reasonable price. Then, he got set for a test drive and the car wouldn't turn over. It was a rare stumble in what has otherwise been a Putin PR juggernaut. Putin's other tough guy antics have included tranquilizing endangered grey whales, capturing a rare Siberian Tiger and even helping to douse last year's raging forest fires from a B-200 bomber. But does this type of manly sportsman-like PR work? "I think it's kind of a universal that people want to see someone who is in charge," said Victoria Hargrave, senior manager of International Projects at the PR firm Edelman in Moscow. "It's no longer enough to give the news channel your statement. It's more important for leaders to be there and have a physical presence." Throughout his presidency, Dmitry Medvedev has allowed Putin to take the spotlight. But many analysts say that Medvedev is finally realizing that he needs to "get out there" more. At a recent event, Medvedev showed his hip, younger side by clapping, swaying and even dancing to a thumping Russian pop tune called, "American Boy." Medvedev is branding himself as the modern alternative to Putin, and also taking steps to show himself as his own man. The state-run Rossiyskaya Gazeta newspaper — ostensibly under Medvedev's control — recently published a glossy advertising insert in the New York Times. In addition to highlighting a "western-leaning" Russia, the paper includes a review of a new documentary. The German film is highly critical of the imprisonment of Mikhail Khodorkovsky. Khodorkovsky was arrested for fraud after becoming involved in a public conflict with then-President Vladimir Putin. In the movie's trailer online, a deep-voiced announcer plainly accuses Putin of orchestrating Khodorkovsky's arrest. "It's all pokazooka, you know like showing off, not doing anything for the people," said Maria Olegovna, with the Jay Walter Thomson ad agency. "If you ask me, serious advertising and self promotion they've been doing looks quite ridiculous. I think Russians are tired of being fed empty promises he always promises what Russia really needs someone to get something done by not doing bla, bla, bla that much." But perhaps Putin and Medvedev's attempts at branding themselves aren't really aimed at regular "Russians" at all. Andrei Kortunov is president of the New Eurasia Foundation, a think-tank based here in Moscow. He said the real kingmakers for next year's elections aren't the electorate, or even Putin, but the political elites. "They have a lot of influence on specific decisions," Kortunov said. "They control resources, they make major decisions and they feel secure and stable no matter who comes to power. Their positions are quite important. If they opt for changes they prefer to see Medvedev if they opt for stability and status quo Putin is their guy." So the question now is whether these political elites think Russia's brand should be "tough guy," or "thoughtful, modern reformer."