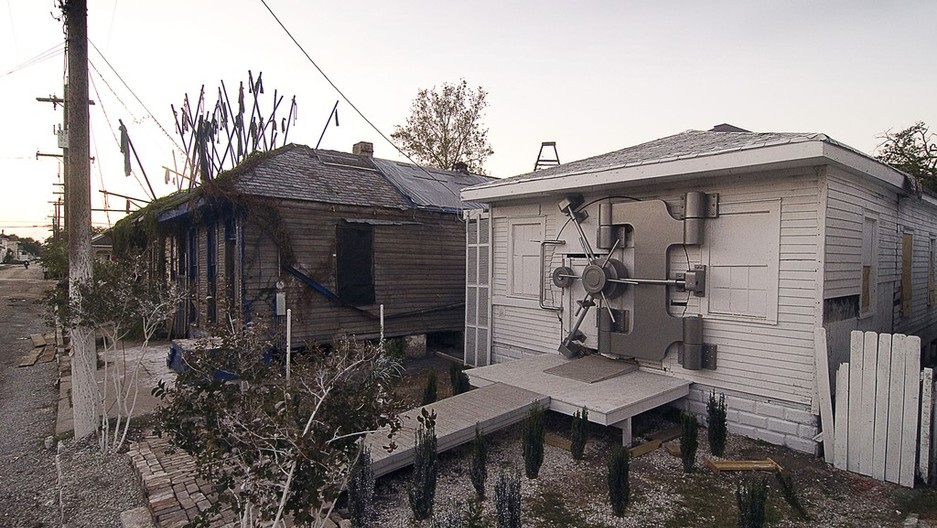 Back in 2007, Kirsha Kaechele had a great idea: take the New Orleans neighborhood St. Roch, with its decaying shotgun shacks, and renew it by building an arts community. She bought a cluster of buildings and started KKProjects intent on reviving blighted North Villere Street. As part of the rescue mission, conceptual artist Mel Chin transformed a white clapboard into a gallery called the Safehouse, with a giant, circular, bank vault door.

Chin had long known the Safehouse stood on troubled ground. The neighborhood's --- and nearly all of New Orlean's --- soil contained poisonous levels of lead. Chin, along with lead scientists, calculated the citywide clean-up at $300 million. So he started the Fundred project: he asked local kids to decorate fake $100 bills in hopes of eventually exchanging them for $300 million in federal funding. The "fundreds" would be stored in the Safehouse.

Listen to our story about Chin's project from 2009:

Two years later, the Fundred project is still going. According to the counter at fundred.org, Chin has collected $36 million in fundreds.

But the project may be one of the only bright spots remaining from the North Villere Street initiative. Chin ended his installation at the Safehouse in early 2010 and later had his team remove the circular vault door after vandals started damaging the building. The Times-Picayune reports the space "has become a trash-strewn haven for squatters." Other KKProject buildings on the block are boarded up, overgrown with weeds and vines, and one was recently demolished. The blight has returned and neighbors are angry.

Kaechele explained to the newspaper that she'd run into financial trouble keeping KKProjects going and that it had "gone fallow." In a video made by Times-Picayune reporter Doug McCash, she admits that the neighborhood "always was blight and is blight." But she insists the project will come back and that artists continue to contact her about making work in these dilapidated houses.

Artists can be gifted at exposing injustices, but North Villere Street tells the flip side of the arts-as-social-action story: as well intentioned as they can be, artists sometimes don't make the best community organizers.